Home / BIBLICAL ANSWERS / When Your Hopes Are Dashed

When Your Hopes Are Dashed

“Son of Man, I have made you a watchman for the house of Israel; therefore hear a word from My mouth, and give them warning from Me” (Ezekiel 3:17).

–     The role of a watchman is to warn and teach.
“…But if the watchman sees the sword coming and does not blow the Shofar, so that the people are warned; and then the sword comes and takes any one of them, I will hold the watchman responsible for the deaths” (Ezekiel 33:6).

Some of what I am about to share was inspired by Christian inspirational author, Max Lucado.  Well…OK, maybe a little more than some; alright in full disclosure, Max Lucado wrote on the topic of Hopes Dashed in a truly remarkable book on the life of David the Shepherd who became David the King of Israel – Facing your Giants by Max Lucado.  I was ministered greatly by Max’s words of healing and instruction, and felt led to ride in his wake and pen the following commentary.  I pray Max doesn’t get grumpy thinking I did him a disservice employing my own Max Lucado style.  I am indebted to pastor and writer Max Lucado for many years of making biblical lessons come alive in present-day settings.  May our Lord continue to richly bless and direct Max Lucado as he ministers to folks he may not meet this side of Heaven.  But once in our Forever Home, I intend to walk over to Max’s mansion, ring the door bell, and invite him out for a coffee and bagel thanking him for how he touched my life for good through his stories. ~LJR

King David was within days of his death.  Old and tired, bent and worn, this still mighty man of God is at the door of his departure to Heaven.  What could be called David’s Farewell Address to Israel, King David said, “I had intended to build a permanent home for the ark of the covenant of the Lord and for the footstool of our God” (1 Chron. 28:2).  “I had intended….”  Have you ever uttered those words?  I have many times!  May I pause and share that we serve a truly magnificent God who is so gracious when we are not; who is patient when we are the opposite; a God who knows us right well and in spite of our many fallacies’ and acts of rebellion still loves and likes us more than we love and like Him.  King David, mighty, by all accounts very successful, the boy shepherd who became King,  the man who taught how to worship the Lord always, to rejoice and to walk even through the valley of the shadows by faith (read just about anywhere in the Book of Psalms) was days away from his death, and with heartfelt sorrow uttered the words, “I had intended.”  I can only imagine David’s sorrow and heaviness of heart.  After rescuing the Ark of the Covenant, David began developing plans to build a permanent and glorious home for this very special item with God’s Sh’khinah (Divine Presence).  But the Lord of lords and King of kings said, “No!”  The Lord had other plans.  Can you relate…I am sincerely asking, because I can relate.  I can count on several fingers (bet Max Lucado never used such wording) those times I made plans only to have the Lord close (sometimes even slam) the door.  I made the plan, I went about the preparations, I had it all figured out…but God!

Walking with the Lord develops, in time, the ability to walk in submission (cooperation) and humility (trust).  Not easy…just ask any of the disciples, or the Apostle Paul who was a strong-willed and “what is/is” guy.  Paul was a leading lawyer in line for a position on the then equivalent supreme court.  Paul knew how to argue, to pick apart that which is being said, to know what “is/is”… but God!  King David was not all that much different, a mighty commander and warrior, a leader among leaders, a visionary (he rebuilt all of Israel and especially the magnificent city of Jerusalem), strong-willed and determined, success upon success mounting, but like each individual chosen by our Lord, there is a flaw hidden here, another there but the Lord continues to work through the person and their flaw(s) to bring about His Will, not man’s plans.  Our country is about to learn this sobering and profound lesson.  God’s ways are not man’s ways, for His ways are higher than ours, and His plans are higher than ours.  Paul learned, David learned, Peter learned, ALL of the Lord’s representatives have learned, for now we look through a mirror dimly but a day is quickly coming when we will see the Lord face to face, up close, personally, and know far more His ways are not merely focusing on our ways, our plans.

I am still learning the vital lesson of Lyle’s ways are not always God’s ways.  I have had some great plans… really; well thought through and in detail, not simply self-serving and clearly to help others; for sure the Lord would smile and approve, even so much to say, “well done, son, I hadn’t considered the situation in the manner you just laid out.”  And I would smile slightly not revealing any pride (it’s a learned process).  You see, Lyle intended, but God said, “No!”  What do you do with an experience like that?  What do you do when God says, “No!”  When God interrupts your well thought-out plans?  King David was sad, he was after-all human, a man with emotions not a robot.  But King David, who had risen from being the runt of his family to King, from herding sheep to leading armies, from sleeping in the pasture to living in the palace, from hiding for his life in caves from those intending to kill him, to being out front for all mankind to view clearly, David learned that God’s ways are not always man’s ways.  For God has a plan much higher than man could ever imagine.

David had learned this poignant God-lesson.  “For I know the plans I have for you, says the Lord.  They are plans for good and not for evil, to give you a future and a hope” (Jer. 29:11).

May I close by thanking Max Lucado for his unselfish allowance in my using some of his material.  I might have to buy two bagels instead of the one I mentioned above.  And close with this story also taken from Max’s book: Facing your Giants.

A man named Willem wanted to preach and teach God’s Word.  By the age of twenty-five, he’d lived enough life to know he was made for the ministry.  His life was to be the church, the people, God’s Word revealed in real time.  Willem went to the coalfields of southern Belgium.  There in the spring of 1879, Willem began to minister to the simple, hardworking, tough, and stoic miners of Borinage.  The people didn’t take quickly to Willem, they watched, they tested, they kept their distance.  Then a mining disaster occurred where many died, more were injured, many of them seriously.  Willem went to work showing the Gospel of Christ by patching them, feeding them, re-clothing them, burying the dead.  He sold most of what he had to help pay for all of this.  And the people slowly but steadily responded, and Willem’s church became full, and he was content doing that which he always wanted – pastor and share God’s Word.  One day his superior came to visit.  Willem’s lifestyle and truly meager dress and manner of life was appalling to his superior – “you look more pitiful than the people you came to teach,” his superior stated coarsely.  But Willem simply asked, “ if Jesus wouldn’t have done the same?”  The older man was appalled.  This was not the proper appearance for a minister, and he dismissed (fired) Willem from the ministry.  Willem was devastated.  Truly devastated.  All Willem wanted was to build a church, to preach and teach God’s Word.  Why wouldn’t the Lord allow him to do this work?  Willem asked what I have many times, maybe you, too?  “I had intended…I had made preparations…I had a well thought-out plan…but God!  Are you still with me, can you relate?

Willem was devastated, he was hurt and angry.  He didn’t have any other plan.  Then one day he began (mostly out of boredom and discontent) to sketch some of the very coal miners he once pastored.  His drawings were rough, they were nothing to look at, nothing at all to behold…but God!  You know, or at least have heard of this man Willem.  He who’s plans were interrupted, who’s idea of how to move into life were dashed, who moved excitedly and purposefully in one direction, and then had his direction all disheveled…you at least know his name – Vincent Willem van Gogh.

God’s ways are not man’s ways.  Our dashed hopes and plans are God’s opportunities to place us on a path He long ago planned for us out of love.

LYLE J. RAPACKI, Ph.D. is an intelligence and threat assessment specialist.  He has advised members of the Arizona Legislature since May of 2010, on issues associated with threats to the southern Border and to State sovereignty.  His reports and consultations enlarged to include elected and law enforcement officials across the country.  He writes for the national platform True Conservative Pundit, and many of his articles and commentaries are then reproduced on numerous national platforms.  He is the author of the highly acclaimed booklet: “Our Forefathers truly Appealed to Heaven.” Available on Amazon Kindle $10. 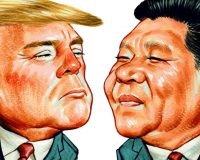