Home / FREEDOM WATCH / Attorney General Keith Ellison: Accuser of The Innocent, Defender of The Guilty – Attempting to Equate Hate to The Law that Exposes Their Crimes

Attorney General Keith Ellison: Accuser of The Innocent, Defender of The Guilty – Attempting to Equate Hate to The Law that Exposes Their Crimes

Taqiyya- Deception and Lying in Islam. Precautionary dissimulation or denial of religious belief.

As many of you know, the state of Minnesota has a brand new attorney general, his name is Keith Ellison, and his Muslim name is Muhammad Hakim (Over the years Ellison operated under names including Keith E. Hakim, Keith X Ellison, and Keith Ellison-Muhammad). I know that there are many that say, “How stupid can Minnesotans be?” but in reply, I say, “Not that stupid.”

There are many at the grassroots level and otherwise who are very aware of what is happening here.

Minnesotans are also very aware of the voter fraud taking place in this state, as well as the tactics being played out behind closed doors.

It has been accredited to dictatorial, tyrannical Communist Joseph Stalin “people that cast the votes don’t decide an election, the people who count the votes do.”

Furthermore, the same media that 94% of Americans do not believe and rightly so, are also in full operation here in Minnesota attempting to give cover for them that are in fact conspiring against the people of Minnesota.

Without the mainstream media’s propaganda outlets attempting to breathe life into their agendas they are completely lifeless and without any credibility or support from the people that they claim to be speaking on the behalf of.

For 18 Years, US Government & Mainstream Media Claimed “We’re Under Attack By Muslims” – Now, They Cover For Muslims When They Attack Americans

How many times does the mainstream media need to get caught lying before Americans realize what they are dealing with?

Case in point: I don’t know of a single person that wants to see this state handed off to those who mean to destroy it.

The tax evader, cop-killer supporter, woman abuser and terror-tied funded Attorney General Keith Ellison means to illegally bring into Minnesota a 300% increase of Somalians.  I don’t know anyone in Minnesota advocating for that.

Keith Ellison: Other Women May Also Accuse Me Of Abuse

Furthermore, this is treasonous and clearly illegally as to what he is attempting to do here in the state (8 US Code & 1424).

This should come as no surprise to anyone considering Keith’s betrayal of his “professed” Christian faith to that of Islam. (Luke 22:48; Romans 9:8).

It is also interesting to note that Keith Ellison has the full support of the governor in the state, as well as the first sodomite sheriff in Minnesota history.  Sound a little conspiratorial yet?

The Fix is In! Who Voted in A Sanctuary State Governor? A Sodomite Sheriff? A Terror Tied Muslim?

If Keith isn’t feebly attempting to defend Luis Farrakhan, then, his sidekick Minnesota CAIR director and Minnesota Governor’s transition board member Jaylani Hussein is attempting to create Christians to be what only the devil can produce (Matthew 7:16).

Keith Ellison Defends Louis Farrakhan: “He Had Something To Offer”

Keith claims that he wants to end hate crimes, not realizing, of course, that all crime is motivated by hate.

So, in order for him to do that, he needs to create the hater and the victim (1 John 3:12). In his confusion, Keith even went so far as to expose himself (Revelation 12:10) by making reference to the Southern Poverty Law Center.

“Sometimes the press will describe us as monitoring hate crimes and so on … I want to say plainly that our aim in life is to destroy these groups, to completely destroy them.” – Mark Potok, director of intelligence at Southern Poverty Law Center

Of course, what Keith Ellison is doing is attempting to create law abiders (Hebrews 8:10) that expose the crimes of the law-breakers (Romans 3:20; 1 John 3:4), into enemies of the state.

Apparently Keith Ellison, Governor Tim Walz and the media and them that they are tied to are overlooking the crimes and criminals of them that they mean to protect.

Minnesota FBI Teaming Up with Hamas Terror-Tied CAIR-ACLU: Hate Crimes Meeting Cancelled for Safety Reasons – Only Thing They Could Resort To As The People Showed Up In Protest!

After seeing what the media has been blacking out here in the state of Minnesota, I believe you will then ask as so many have, and are, whom Keith Ellison is working for. The answer is quit obvious. Here are some examples…

Minneapolis: Somali Gangs Are Claiming Territory & Killing To Defend It

If at this point you have any questions to the validity of what is starting to take place in Minnesota, take a look at the statistics of countries that are now being plundered and overtaken in Europe by the same people that are the likes of Ellison. Remember, Keith Ellison hates the law that exposes his and his accomplices’ crimes (Romans 3:20), and in turn, wants you to believe that they are somehow the victims in making the innocent guilty (Isaiah 5:20).

Muslim migration has doubled in the decade since 9/11 and 60% of migrants to America favor sharia law (Deuteronomy 28:15-68).

One more point: “Rep. Keith Ellison, D-Minn., a third-term congressman and a co-chair of the Congressional Progressive Caucus. On the Gay, Lesbian, Bisexual, and Transgender Rights page on his House website, Ellison notes that he is ‘proud to be vice-chair of the Congressional Lesbian Gay Bisexual Transgender Caucus.'” https://www.wnd.com/2013/10/congressman-both-muslim-pro-gay/

If you are paying attention to the Islamic community globally, you can see that they are in lock step using the same exact method as the sodomites are using (Leviticus 18:22; 20:13).  They are even going so far as to create self-inflicted hate crimes only to blame the innocent for them (Deuteronomy 19:19).

Remember, this is all predicated upon the use of totalitarian tactics (John 8:44) and playing the victim while at the same time perpetuating the crime by tearing down the law.

The resolve is that Keith Ellison must be called out, be impeached and indicted for his crimes (treason) against the United States (Article 2, Section 4, United States Constitution). There is no other option. 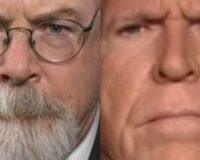 Origins Of Criminal Probe Into “Spygate” Revealed By Durham And **** Is About To Hit The Fan
April 6th, 2020 Right Wing Tribune