Home / BIBLICAL ANSWERS / EASTER SPECIAL: How Jesus Might Look Back at the Cross

EASTER SPECIAL: How Jesus Might Look Back at the Cross

(Note to Readers: In the late 1990’s a church prepared to produce an Easter Program, with several chosen to play the parts of those who had been with Jesus during the Crucifixion as they reflected on that event. When this writer was asked to “be Jesus” the answer was no, since no-one is worthy to portray Jesus. It DID seem right to present how Jesus might give His thoughts and what He might say instead of actually pretending to BE Jesus, so the writing began. The reception of it was so strong that it was decided that it be written for publication where it also received solid approval, so much so that it became an annual Easter Feature since in publications throughout the world.)

The world today is in chaos. There are no restraints in human conduct. Absolute values have long been abolished. Good is considered evil, and evil is considered good. And never has The Cross been more offensive to society than it is today. Sin abounds. Any mention of the name Jesus Christ brings contempt and ridicule. His name is blasphemed and many public displays of Christianity have been declared illegal, while at the same time, pagan religions are readily endorsed and encouraged. Seeing all of this, would Jesus have second thoughts about Calvary? How would He look back on his sacrifice today? Think about it.

Prayerfully pondering these questions, this writer speculates what Jesus might say to us today as He looks back to the Cross:

“But beloved, be not ignorant of this one thing, that one day is with the Lord as a thousand years, and a thousand years as one day. Our time reference is much different in Heaven than it is on earth. If you were to be with us in Heaven, you would see an entire life spin out from birth to death in a matter of seconds.

“This is why coming to earth to face Calvary’s Cross was the greatest challenge I have had to face during my existence. First I had to come under the earth’s time system of seconds, minutes, hours, weeks, months and years.

“Even more challenging was agreeing to inhabit an earthly human body with its inherited sinful nature. A body that would feel the driftings and currents of the world as well as the pain.

“And it may surprise you to learn that I had to exercise extreme faith to go through with this. Remember, I began my sacrificial life on earth as a baby… a new birth on earth. As a baby I had to be fed, bathed, and diapered like any other baby. I had to learn to take my first steps, learn to understand and speak words, and, experience the growing pains of adolescence.

“The time passes slowly for young people and soon there was such a feeling of distance between where I was at that time, and my time in Heaven with my Father, that it almost seemed a memory that may or may not have actually been.

“And while instinctively I wanted to be about my Father’s business, the Jews in the synagogues would curtly ask, “Who is this boy who asks such questions? Isn’t this Joseph the carpenter’s son?”

“I eventually faced the appointed day… a day where I would take on all the sins of mankind, a day where I would (in a human body) die a disgraceful, excruciatingly painful death while the Roman soldiers ridiculed me and religious leaders mocked in the distance.

“And yet, this was the only way that mankind could be redeemed, saved by Grace, and reconciled to God. Without this sacrifice, all would perish, which had been Satan’s plan since the Garden of Eden.

“My human body was capable of the same temptations and stress as yours. This is why that in the Garden of Gethsemane, knowing what I faced the next day, I sweated great drops of blood. And yes, at one point (giving into the body I inhabited), I cried out: ‘Abba, Father, all things are possible unto thee; take this cup from me… nevertheless, not what I will, but what thou wilt.’

“The reality of what I faced was now before me – the unspeakable pain – having to endure all the sins of mankind in my body…to be taken to hell and back, to be ridiculed and to have one of my own disciples betray me… for money.

“I had to call on every ounce of faith I possessed to go through with this. But I had no choice. The world itself was at stake. And my love of mankind was such that I would have none perish.

“As my Father promised me, and, as explicitly detailed throughout the prophecies, the entire event went exactly as foretold, ending in great victory. Lucifer suffered his greatest defeat as the keys of death were snatched from his hands. Death was conquered, giving instead, to all who believe in me, everlasting life with me in Paradise.

“Looking at the world today… a world filled with violence, chaos, sin, unspeakable crimes against humanity… and even seeing those who call themselves My servants cutting down each other and distorting my Word, one could well ask, ‘Was it all worth it?’ If you could go back, would you go through the crucifixion again?’

“Yes I would. I would go through the whole thing for any ONE of you here. That is how much I love you. When you join me in Heaven, you will understand why I would want to share this Paradise with you. Heaven (you will see) is filled with exquisite peace and joy, and a place where you will inhabit perfect heavenly bodies… bodies free from aches, pains and disease.

“On second thought, let me clarify something. There will be one imperfect body in Heaven. And every time you see the nail holes in my hands and feet, and the scar in my side, you will be constantly reminded of how much I love you. And let me add, it was all worth it.

“So come unto me, all ye that labor and are heavy laden, and I will give you rest. Take my yoke upon you, and learn of me; for I am meek and lowly in heart; and ye shall find rest unto your souls. For my yoke is easy, and my burden is light.”

Wishing You All A Very Happy Easter Celebration

Previous: He is Risen!
Next: Is Easter a Farce and a Fraud Since Dead Men Don’t Rise? 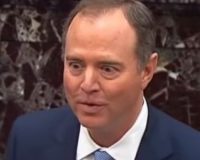 FCC Chair Who Implemented Section 230 Admits Creating a Tech Monopoly Was the Plan All Along
January 25th, 2020 Big League Politics

Protestants: The Power of Protest – Obedience to God is Found in Resisting Tyrants – The Language of Our Forefathers