Fulani cause death and destruction for Nigerian Christians

Voice of the Persecuted (VOP) — Multiple states in Nigeria continue to witness attacks by extremists and a recent rise in violence. VOP’s Nigerian correspondent interviewed community leaders and eye witnesses of 5 Christian villages that were brutally attacked by Fulani herdsmen during the past year. All the villages are located in the Local Government Area of Numan in Adamawa State.

On January 4, 2018, armed Fulani herdsmen raided GON village and killed Mijidanna Akilla, an elderly man of 70 years who was unable to flee during the attack.

September, 14, 2018 – In the late afternoon, the Fulani militants came again shooting then burned down the villagers homes. 12 women and children were killed while others escaped though the Benue river in canoes. Gon’s community leader told VOP’s correspondent, “We reported the matter to the Nigerian police/military three times but they didn’t respond until after the armed herdsmen raided our village. Our community is not safe.”

The Numan Local Government Head of the Service assisted the villagers placement into the Numan Internally Displaced Persons (IDP) camp. The village leader shared, “Unfortunately we are facing a problem of shelter, feeding and medical care. We sleep on the floor in a classroom, while some on mats and fewer on mattresses. Though they have assisted in enrolling our children into public school, it’s very difficult to pay for books.”

“We can’t go back to our villages; we are appealing to the International community and the government institutions to come to our aid. We are unsure about the future here and what our fate will be without any intervention.”

In May 2018, Mrs Sodom Daniel, a lawmaker representing Numan constituency in the Adamawa House of Assembly, implored the Federal government to consider establishing an Internally Displaced Persons’ (IDP) camp in the area.

She described how incessant attacks on the communities within the Numan local government area had rendered many people homeless. She appealed to all those concerned to assist the victims of the attacks.

“It has become a serious matter of worry as we wake up from time to time to observe increasing number of displaced persons resulting from incessant attacks on our communities in Numan by herdsmen.

I am appealing to the Federal Government to establish an IDPs camp that would cater for this growing number of internally displaced people.

I am also calling on well meaning Nigerians, donor agencies, philanthropists and many other groups to come and assist us in tackling this enormous humanitarian task,” she said.

The Fulani attacked Bolki village on February, 5, 2018 and killed 11 people while 4 still remain missing. “We don’t know if they are dead or alive. We reported the matter to security forces but they did nothing about it.”

On May 9, 2018, the Fulani again invaded the village armed with guns. One of the victims described how they were able to survive the attack. “We were lucky to have canoes and cross over to the other side of the riverbank.

On August, 1, 2018, the herdsmen ravaged the village by bringing many cows with them. They led the cattle to the fields where the village farmers had planted maize, carrots and other vegetables. Some of the Fulani militants stood guard with guns and machetes waiting to kill any villager who tried to intervene. The animals ate all the crops, which robbed the farmers of much needed income and the villagers of nutrition.

The last attack took place on September 14, 2018 where armed Fulani herdsmen came to Bolki in the evening hours and started shooting. 3 people were instantly killed while 19 others drowned in the river while trying to escape the killers.

During the Fulani raids in the last quarter of 2018, a total of 34 villagers were killed.

“Due to the horrific attacks, the local government officials sent canoes to the riverside to rescue us then brought us to the IDP camp in Numan.

When we first arrived they gave us some mattresses and food, but now things have terribly gone wrong. We have challenges of shelter, food and medical services, they are not enough. The situation, has forced some of the men to return back home in search of food. Sadly they were attacked between September 19-22, 2018 and one of them were killed.

We are prepared to go back home, but the fear of insecurity has left us with no other option than to suffer here. Our women and children are finding it impossible to endure this hardship. We are appealing to the government to intervene and make our community safe so that we can go back.”

We are facing many challenges in our community because of the attacks by the armed Fulani Herdsmen. On September 4, 2018. They invaded our village with guns and bow and arrows. They burnt down the entire village and killed over 20 people that night. Many drowned in a river and died as well. Some of their bodies have never been recovered.

It was very chaotic! Everybody was running to save their lives. Unfortunately, the incidence happened while I was in pain with no strength to run because I had a fresh wound from surgery. Out of panic, I fled into bush and stayed in hiding until I was rescued and brought to the IDP camp.

We have very serious problem of food here. As am talking to you now, we haven’t had any food in 4 days. We cannot go back home because of the insecurity but the suffering here is getting more terrible everyday. Another issue is the shelter, medical service and even education facilities for our children.

We are desperately looking for assistance. We can’t return back home since our villages are completely destroyed. We ask the government and international community, come to our rescue and save us!

On September 14, 2018, the Fulani militia came into our village in the evening hours and started setting houses on fire. They chased the villagers with guns and machetes. Since the Christians were anticipating an attack at any given moment, they stayed on alert. But even so, 21 people were killed. Of the victims, 7 men were murdered while the remaining were women and children.

They burned all our food and houses rendering us empty with no alternative for survival.

The following day, a member of the House of Assembly representing the Numan constituency and the Head of Service organized a means of transport and rescued some of us. After we arrived at the IDP camp, we learned that the gunmen went further to destroy all our properties.

Life here in the camp is pathetic, very few individuals assist us despite the challenges of school facilities, medical services, shortages of shelter and of course lack of food. In some instances, they send our children away from the school even with all the pledges.

We need help, we cannot return back to our community, it’s not safe. Let the government intervene to support the efforts of the other individuals.

Numan IDP’s stated after coordinated attacks on 5 villages namely Gon, Bolki, Nzumosu, Yanga & Sabon Layi between September and October 2018, over 3000 people arrived at the Numan IDP camp. The number has been reduced as 43% left due to the dire hardships in the camp.

Some returned back to try and repair their burnt homes and check if it’s possible to resettle in their villages. Others have scattered in the town with no sense of direction. At great risk, some farmers and fishermen decided to go back to the killing zone in search of shelter and food.

“We currently have a total of 1,716 Internally Displaced Person (IDPs) in the Numan camp and all are Christians equaling 236 families.”

Here is a breakdown of the people in the camp.

(Photo: Voice of the Persecuted-Displaced Christians in Numan IDP Camp)

Voice of the Persecuted is committed to being a VOICE for persecuted Nigerian Christians and bring them comfort, relief and encouragement. We are committed to our mission called PROJECT 133 in Nigeria. They will not be forgotten!

We want you to know that even in great hardship, they thank God and feel extremely blessed that He has kept His hand on them. They have been so encouraged and thankful for each one of you who have joined this mission through your prayers and support.

Together with your generous help, we can reach the goal to alleviate horrific suffering. In darkness and desperation, let us serve in love, with open arms and giving hands to provide light and hope.

HELP SAVE THE PERSECUTED

Everyday, we thank God that He is working through you to care for His children and further His Kingdom! As you greatly bless others, may God continue to bless you. Thank you so much for your support. We couldn’t do it without you!

If the Lord is placing it on your heart and you are able, please help us to continue the mission in Nigeria. Donations always desperately needed. 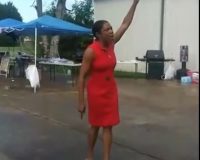 What Are You Fighting For? Woman Gives Epic Independence Day Speech The MSM Will Never Air! – Trust Me You’ll Want To Hear This! (Video)
July 8th, 2020 Sons of Liberty Media