The wait for the next global financial crisis is over. Major currencies all over the planet are in a “death spiral”, many global stock markets are crashing, and economic activity is beginning to decline at a stunning rate in quite a few nations. Over the past 16 years, the emerging market debt bubble has grown from 9 trillion dollars to 63 trillion dollars. Yes, you read that correctly. Now that emerging market debt bubble is imploding, and as a result emerging market currencies all over the globe are in “complete meltdown”. In fact, at least 20 different currencies have fallen by double-digit percentages against the U.S. dollar so far in 2018, and nobody is quite sure what is going to happen next.

You may be tempted to think that this must be a good thing for the United States since the value of the U.S. dollar has been rising, but it is not.

During the “boom years”, trillions of dollars were borrowed by emerging market economies, and a high percentage of those loans were denominated in U.S. dollars. Now that their currencies are crashing, it is going to take much more local currency to service those U.S.-denominated debts, and a whole lot of them are going to start going bad.

That means that many financial institutions here in the United States and over in Europe are going to end up holding enormous piles of bad debt, and the losses could potentially be astronomical.

The dominoes are starting to fall, and even the mainstream media is admitting that what we are facing is really bad. For example, the following comes from a CNBC article entitled “The emerging market crisis is back. And this time it’s serious”…

The crisis has engulfed countries across the globe — from economies in South America, to Turkey, South Africa and some of the bigger economies in Asia, such as India and China. A number of these countries are seeing their currency fall to record levels, high inflation and unemployment, and in some cases, escalating tensions with the United States.

When I say that the world has been on the greatest debt binge in human history since the last financial crisis, I am not exaggerating one bit.

Of course this bubble was going to burst.

Anyone with half a brain should have been able to see that.

Now we have a full-blown crisis on our hands, and nobody seems to have any idea how to solve it.

As Charles Hugh Smith has observed, emerging market currencies all over the globe “are in complete meltdown”…

As the chart below illustrates, a great many currencies around the world are in complete meltdown. This is not normal. Nations that over-borrow, over-spend and print too much of their currency to generate an illusion of solvency eventually experience a currency crisis as investors and traders lose faith in the currency as a store of value, i.e. the faith that it will have the same (or more) purchasing power in a month that it has today. 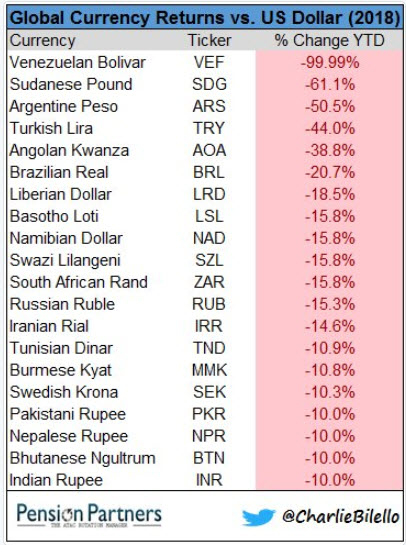 I am not sure that I even have the words to describe financial carnage of that magnitude.

Since the financial markets are not crashing here in the United States yet, most Americans do not really seem to be concerned about this crisis at this point. But that is a mistake. This meltdown has started with the weaker nations, but ultimately what we are witnessing is an “unraveling” of the entire global financial system…

The fact that so many currencies are melting down at the same time is telling us the global financial system is unraveling, and unraveling fast. This is a symptom of a fatal disease. Currencies reflect all sorts of financial information; they’re akin to taking an economy’s pulse: trade balances, debt levels, interest rates, central bank policies, fiscal policies, and so on.

The global financial system is inter-connected, but this is not a viable excuse for the meltdown. The general explanation floating around is that currency weakness is like the flu: one currency gets it, and then it spreads to other weak currencies.

This diagnosis is misleading. What’s actually happening is the unprecedented global bubble of debt and assets of the past decade is popping, and it’s laying waste to the most indebted, over-leveraged and mismanaged nations first, either via stock market declines or meltdowns in currencies.

Earlier today, we learned that the South African economy has officially plunged into a new recession. This crisis is spreading very quickly, and the United States won’t be immune from what is happening. This is a point that Charles Hugh Smith made very well as he wrapped up his most recent article…

The illusion that the U.S. is immune to the unraveling of debt and asset valuations won’t last. When the defaults start piling up, so will the losses, and when asset bubbles pop, incomes and spending decline. Although few seem to notice, almost half the profits of the S&P 500 corporations are earned overseas.

The belief that U.S. markets are somehow disconnected from global markets and immune to the repricing of risk, debt, assets and currencies is magical thinking.

I am entirely convinced that we have reached a major turning point.

For several years it has seemed like things have been getting “better”, but it was largely an illusion. Our ridiculously high standard of living was financed by the greatest debt binge in the history of the world, and it was inevitable that a day of reckoning would arrive.

Now that day of reckoning is knocking on the door, and our society is completely and utterly unprepared for what is going to happen next.

This article originally appeared on The Economic Collapse Blog. About the author: Michael Snyder is a nationally syndicated writer, media personality and political activist. He is publisher of The Most Important News and the author of four books including The Beginning Of The End and Living A Life That Really Matters.

The Lid Exposed Helen Thomas A Decade Ago-And The MSM Is Still Protecting Her
June 4th, 2020 The Lid