Pro-aborts are in high gear opposing President Trump’s nomination of Brett Kavanaugh to the Supreme Court.

They are so determined to kill unborn humans that an ice cream shop in Portland, Oregon — What’s the Scoop — partnered with the radical pro-abort group NARAL to create and market a new ice cream flavor called “Rocky Roe v. Wade” (The Blaze), so that customers can celebrate legally killing their unborn by eating an ice cream. Never mind the fact that the babies killed never get to taste ice cream, much less live.

Now, Oprah Winfrey is urging women to brag about their abortions.

Micaiah Bilger reports for LifeNews, Aug. 20, 2018, that Oprah Winfrey is using her “O” magazine to promote the “Shout Your Abortion” movement that “normalizes” the killing of unborn babies by urging women to brag about their abortions.

“[W]hen I found out that the House of Representatives had voted to defund Planned Parenthood. I kind of unraveled. I opened Facebook and, without thinking, wrote, ‘Like a year ago, I had an abortion at Planned Parenthood…and I remember this experience with a nearly inexpressible level of gratitude.’ I hit Post 153 words later, and everything changed…. On some level, I’d internalized the stigma—though I honestly wasn’t ashamed. Then why hide? It wasn’t out of character for me to disclose something so personal online. What was out of character was my silence. 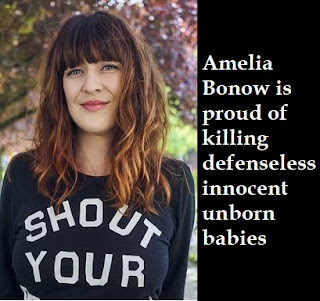 Bonow blames the pro-life movement for trying to silence women who have had abortions:

“The anti- choice movement wants it to be terrifying to speak the truth, because we can’t advocate for something we can’t say out loud. But the more of us who speak out, the clearer it becomes that all sorts of people have abortions, including people you love.”

But LifeNews‘ Bilger points out that it is really the pro-abortion movement that silences women whose abortion stories do not fit their narrative:

Long ago, pro-life advocates recognized the power of individual people and their stories in the abortion debate. The Silent No More Awareness campaign is just one example of the many pro-life storytelling outreaches. It encourages people who experienced pain and regret after their abortions to share their stories publicly, and its website documents thousands of stories of mothers, fathers, grandparents and others who experienced deep pain and remorse because of unborn babies’ abortion deaths.

“O” magazine is doing a disservice to its readers by promoting the “Shout Your Abortion” campaign. Bonow’s movement gives the impression that women are glad they aborted their unborn babies. The truth is that some women regret their abortions and others do not, but no matter what the women’s feelings, their abortions destroyed another human being, their own child’s chance to ever have a story.

Meanwhile, there is some good news.

A recent CBS poll found that the majority of young millennial women (ages 18 to 35) reject unrestricted abortion, refuse a “feminist” identity, and do not trust the MSM:

ANTIFA and BLM caused the Capitol riots - and they were all paid to do so.   By Rev. Austin Miles (TCP News)  The lying newspapers today...
Read more
FEATURED ARTICLES

The Joe Biden administration to "root out" those considered dangerous to America - like conservatives.   By Greg Holt (TCP News)  It is happening, the reshaping of...
Read more