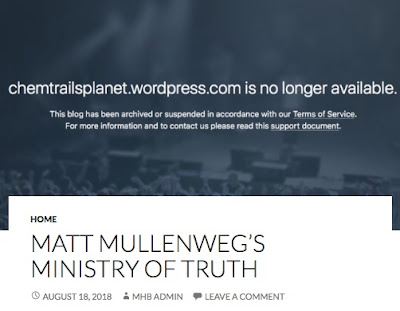 By James F. Tracy
The individual who oversaw an across-the-board, content-specific evisceration of WordPress.com-hosted websites is none other than Matt Mullenweg, the 34-year old chief executive of Automattic Inc. and creator of WordPress.com. A supporter of the Electronic Frontier Foundation and purported advocate of “Free Speech” and “Open Source” technology, Mr. Mullenweg caved to a New York Times story highlighting the alleged plight of individuals related to the dubious Sandy Hook mass shooting event.
Mullenweg promotes himself and his companies as alternatives to the “tech giants” and “big platforms” such as Google and Amazon. Yet if the world’s super-wealthy blog czar ever did have the personal integrity and zeal to defend the right of expression and open source philosophy via his enterprises, his recent management appointments and the flagrant censorship of his WordPress clients below indicate that these have clearly been forgotten.
What do we know of Mr. Mullenweg’s political inclinations? He is a left-progressive and supporter of the Democratic Party and former President Barack Obama, whose administration oversaw and appears to have coordinated the Sandy Hook massacre event in order to further its own radical gun control agenda.
In 2016 Mullenweg endorsed the campaign of far-left presidential hopeful and Harvard law professor Lawrence Lessig. In 2017 Lessig, a leftwing academic ideologue and outspoken opponent of Donald Trump’s presidency, proposed a scenario by which Hillary Clinton might seize the White House in a bloodless coup.

A careful reading of WordPress.com’s Terms of Service reveals that the websites known to us to have been “suspended” or “archived” at this time have been censored for no apparent reason, other than Mullenweg caving to pressure from the Times and Sandy Hook gun control activists.

With the above in mind, it would appear that Mullenweg and Automattic have eliminated the following blogs without cause, which is their right under the company’s Terms of Service, and that their shared themes make Automattic’s action content-specific. These blogs include, FellowshipoftheMinds, FundamentalOption, CinderellaBroom, AmericanEveryman, JaysAnalysis, and ChemTrailsPlanet. All of these blogs have contributed to furthering the public’s understanding of governmental and corporate corruption through their detailed analyses of mass casualty events and pedophilia.

According to TechCrunch, WordPress.com actually edited its own Terms of Service to accommodate the complaints of an individual who asserts he is “Sandy Hook parent Leonard Pozner,“and  who routinely files copyright infringement complaints to stifle independent research on the Sandy Hook event.

[Wordpress.com] told The NYT that language was a part of a predefined statement it used, and was sorry that it did so in this particular situation.
However, it also admitted that the posts in question weren’t in violation of any current WordPress user guidelines or copyright law.
We understand the company has since phoned Mr. Ponzer to apologize directly. It then created a new policy to address the problem.
Its new policy reads:

WordPress.com Impervious to Censoring Its Own Clients?

What makes censorship of the above sites even more glaring is the fact that heretofore WordPress has more or less been impervious to content-related challenges to his clients’ blogging, as Mullenweg reveals in a 2015 interview:
WordPress.com’s reach, ambition, and aspirational language are impressive. For example, Mullenweg and company are devoted to “making the web a better place” and “democratiz[ing] publishing so that anyone with a story can tell it …” And as noted, they “believe in Open Source.” The reality of this past week’s purge of bloggers for merely asserting argument that have been found controversial by corporate media strongly suggest otherwise.

We might also interrogate WordPress.com’s newfound penchant for censorship by considering the personnel Mullenweg has recently recruited to steer the enterprise. Announcements of these managerial changes are available on the WordPress.com founder’s blog.

For example, the new managers include former National Public Radio and New York Times executive Kinsey Wilson, who was hired by Mullenweg to oversee WordPress.com in early 2018. WordPress.com remains our flagship product,” Wilson noted upon his appointment. “And the goal is to position it as a platform that provides both simplicity and ease of use as well as tremendous power.” (Emphasis added.)

One might pass Matt Mullenweg off as yet another youthful, easygoing, mop-topped coder and multi-millionaire. Even if this is caricature is partly accurate it hasn’t stopped the tech entrepreneur from tapping top brass from the military industrial complex to steer the WordPress.com ship. In fact, earlier this summer Mullenweg brought on US Army General Ann Dunwoody to Automattic’s Board of Directors.
Four-star General Dunwoody has “managed and operationalized the Army’s global supply chain for numerous engagements, including support of Iraq and Afghanistan operations, contingency operations in Haiti, Pakistan, and Japan, and the Base Realignment and Closing move of Command Headquarters from Fort Belvoir, Va., to Huntsville, Ala,” notes one 2013 press release. (Emphasis added.) General Dunwoody also serves on the board of directors of LMI, a major government consulting firm.
“We’re very lucky to have Gen. Dunwoody’s expertise and experience around the table as we navigate our second decade as a company and realize the huge opportunities ahead of us,” Mullenweg effuses. “With WordPress now powering more than 30% of all sites on the web, we’re excited to work together to shape the future of the open web. Gen. Dunwoody will help us continue to blaze a trail for open source and distributed companies all over the world.”
To make the circle complete Mullenweg has also tapped one James Grierson, former chief executive of BlueHost, to manage WordPress.com’s JetPack product. Under Grierson BlueHost’s legal department enforced a strict, “censor first, ask questions later” policy on any potential copyright infringement claim, however frivolous, as MHB experienced firsthand before BlueHost booted us entirely for alleged “Terms of Service” violations stemming from a complaint by the Sandy Hook-linked scammers.

A cursory search of “WordPress.com’s Reader” area for the blogs WordPress/Automattic continues to host after silencing those it has identified as violating its “Terms of Service” include several that are in demonstrable violation of the company’s TOS.  (“Publish material or engage in activity that is illegal under applicable law.”)

Let us take, for example, the Antifa movement, a far left vigilante organization advocating intimidation and physical violence against virtually anyone its leadership perceives as averse to its political dogma.
Since these organizations are almost without question involved in illegal activity and in TOS violation one might conclude that they should be similarly banished, just as those posting conspiracy-oriented material. Yet perhaps Mullenweg’s political lens renders these sites and their calls to violence invisible, and hence they remain as accessible as before the purge.

To be sure, there are also many WordPress.com clients who’ve survived the purge that espouse unabashed conservative and far-right political views that would be deemed “hateful” and even “violence inciting” in many quarters.

In fact, even the Daily Stormer, a well-known neo-Nazi site that trumpets being “the most censored publication in history,” is a WordPress.com client.

With the above in mind the abrupt deletion of the blogs exposing deep government malfeasance simply makes all of Mullenweg’s extravagant lip service to “democratizatation” and “open source” environments ring hollow. WordPress.com is as anti-free speech as the “big platforms” its leader decries. In today’s political environment where misleading and even demonstrably false news and opinion masquerades as “the newspaper on record” should we really be surprised.
And so within the bowels of Matt Mullenweg’s Ministry of Truth that now includes New York Times and even US military confidantes there must have been a conclusion reached (if but tacitly) that FellowshipoftheMinds, Chemtrailsplanet, JaysAnalysis, and others are so for some unknown reason so dangerous and repugnant they cannot see the light of day.
Republished with permission Fellowship of the Minds