Home / FEATURED ARTICLES / Did Texas School Shooter Dimitrios Pagourtzis Have Links To Antifa Or Was He Just Copying Columbine?

Did Texas School Shooter Dimitrios Pagourtzis Have Links To Antifa Or Was He Just Copying Columbine?

Not again. Yet another mass school shooting in America is making headlines all over the world, and this is another case in which the warning signs were there well ahead of time. Dimitrios Pagourtzis had been wearing a trenchcoat to school all year, he had posted violent and disturbing messages on social media, and he seems to have been obsessed with the Columbine school shooting. Unfortunately, nobody ever intervened, and the entire world now knows the name Dimitrios Pagourtzis.

We must greatly increase school security all over the country, because we simply cannot allow this kind of thing to keep happening. The following comes from the Daily Mail…

A 17-year-old high school junior burst into an art classroom at Santa Fe High School yelling ‘Surprise!’ and brandishing his father’s shotgun and pistol, before opening fire and killing nine students and a teacher.

Dimitrios Pagourtzis was clad in a ‘Born to Kill’ T-shirt when he embarked on his rampage during first period, police say. He subsequently surrendered when confronted by police, who say he backed out of his original plan to commit suicide at the end of the massacre.

The fact that he chose to wear a trenchcoat to school every day should have alerted someone that something was seriously wrong. And we have learned that Pagourtzis had decorated his trenchcoat with some very disturbing symbols…

Other photos shared on Pagourtzis’s page the same day in April depicted a dark-colored trenchcoat festooned with various insignia, including the Nazi Iron Cross, which the teen wrote stood for ‘bravery.’

Additional patches on the garb included the rising sun, a Communist hammer and sickle pin and a depiction of the idol Baphomet, which Pagourtzis said symbolized ‘Evil.’

Because his Facebook profile prominently featured a pentagram, some are trying to link Pagourtzis with Satanism, but on his profile he said that he was an athiest.

But instead of being linked to Antifa, it is more likely that Pagourtzis was attempting to link himself with the Columbine shooters.

On Twitter, Cassandra Fairbanks pointed out that Dylan Klebold wore a similar hammer and sickle button on his shoe during the Columbine shootings…

Dimitrios Pagourtzis was a columbiner. He had the same button that Dylan Klebold wore on his shoe during the columbine massacre. Lots of columbiners wear this button.

To prove her point, she compared an image of the trenchcoat that Pagourtzis was wearing with an image of Klebold’s left shoe on the day when he went on his shooting rampage. 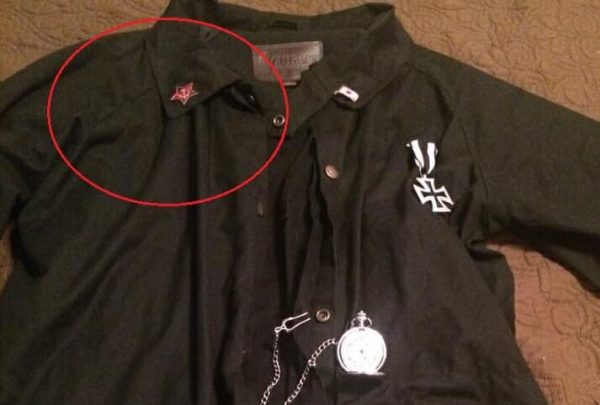 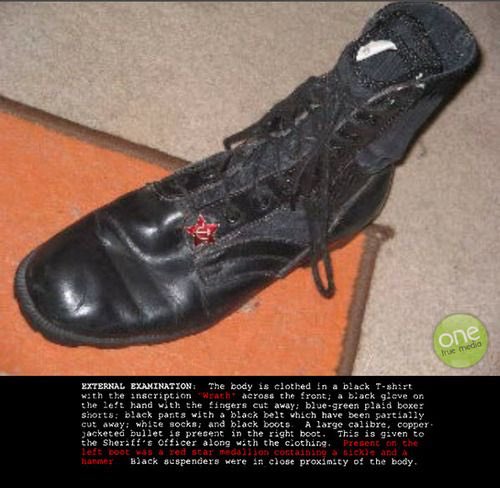 Needless to say, the fact that Pagourtzis was wearing a trenchcoat was a clear nod to Columbine, and Fairbanks also noted that the shirts both shooters wore during the shootings were similar as well…

Of course any time that a great tragedy like this happens the left starts talking about grabbing guns again.

Just when you thought that David Hogg was starting to fade from the public spotlight, this latest shooting has put him front and center once again. Shortly after the shooting in Texas took place, USA Today was already quoting him in a feature article…

“Can we please not debate this as Democrats and Republicans but discuss this as Americans?” asked senior David Hogg, among the most visible Parkland students. “In the comments if you see someone you dissagree with do not attack each other talk to one another, this applies to me too. WE MUST WORK TOGETHER TO SAVE OUR FUTURE.”

Even before this attack we had been witnessing an all-out assault on our 2nd Amendment rights, but taking guns away from law-abiding citizens will not solve anything. The bad guys will always find ways to get guns, and taking our guns away will just deprive us of the ability to defend ourselves.

There are always going to be lots of ways for evil people to hurt and kill people. Bombs, knives and acid attacks are just a few examples. And in recent years we have increasingly seen terrorists resort to using cars and trucks as weapons.

In the end, what we are facing is a very deep cultural crisis that ultimately requires a spiritual solution.

Unfortunately, Americans do not seem very interested in that type of a solution at this point in time.

Michael Snyder is a nationally syndicated writer, media personality and political activist. He is the author of four books including The Beginning Of The End and Living A Life That Really Matters.