By Ethan Huff for Natural News

(Natural News) In the interest of stopping “global warming,” government officials in the United Kingdom have partnered with companies and governments in the state of Virginia to hack down large swaths of southern hardwood forest in order to create “biomass” energy for use across the pond.

Since continuing to burn native fossil fuels like coal won’t help the U.K. achieve its greenhouse gas emission reduction targets, the country has decided to clear-cut entire forests here in the United States and burn all the wood that’s collected to generate electricity – and it’s calling this mass destruction of trees “green” energy.

This partnership between Great Britain and Virginia is costing U.K. taxpayers the equivalent of nearly $1 billion annually, as their electricity bills are padded with extra “green” fees that supposedly help to cover the cost of mowing down America’s hardwood forests and turning them into fuel for homes and businesses.

Because trees are technically renewable, the whole thing is considered to be beneficial in helping to curb the threat of “climate change,” despite the fact that burning wood creates a tremendous amount of heat and ash pollution. But tacking “green” onto the endeavor is apparently enough to pacify the climate fanatics who support the move, and believe that it will help to reduce the U.K.’s “carbon footprint.”

“This is yet another shocking example of the mindless, destructive, anti-science stupidity of the climate change alarmists,” warned scientist Mike Adams, publisher of Climate.news and founder of a globally-recognized food and environmental science lab (CWClabs.com). “Industries are literally murdering living forests in the name of greening the planet,” Adams said. “The very same people who used to be tree huggers are now tree murderers, and none of them appear to recognize any contradiction in their own stupidity.”

According to The Ecologist, the felled trees in Virginia’s hardwood forests are being turned into millions of tons of small wood pellets that are regularly shipped over to the U.K.’s largest power station, Drax, which is located in North Yorkshire. A U.S.-based company known as Enviva first processes the logs into these pellets, which are then hauled across the Atlantic and burned as fuel at the Drax plant.

It’s a laborious process that British authorities claim will help to cut the nation’s carbon emission by 57 percent by the year 2030. Drax plans to completely phase out the burning of local coal, instead bringing in the wood pellets from overseas, which is supposedly “greener.”

According to officials at Drax, the burning of wood pellets rather than coal will supposedly help reduce carbon emissions at the plant alone by as much as 80 percent. This figure comes from laboratory experiments conducted at the University of Nottingham that supposedly show major carbon reductions.

But is this actually true? Not exactly. As explained by The Ecologist, to generate the same amount of energy from wood pellets as from coal ends up producing about eight percent more carbon – meaning wood-burning is actually more polluting than coal-burning.

But because European law regards wood biomass as “carbon neutral,” this isn’t even considered – not to mention the mass destruction of hardwood forests that’s left in its wake. And Drax doesn’t even have to report the amount of carbon emissions coming from its chimneys due to this “carbon neutral” designation.

If Drax was, in fact, required to monitor carbon emissions, it would reveal that biomass is hardly “green” in the way that some people think it is. At least 11.7 million tons of carbon dioxide (CO2) was generated at Drax just last year alone – and if this was all biomass energy, it would be an additional eight percent more CO2.

And while the replanting of trees can help to sequester some of this carbon, trees take several decades to regrow. This implies that creating biomass is hardly a “green” endeavor, and is actually causing widespread destruction to, in this case, America’s precious natural resources.

“Britain may be on track to eliminating the use of coal but they are not on track to reduce their carbon dioxide emissions,” The Ecologist explains. “We’re not going to meet our one and a half or two-degree targets that all governments, including the British government, agreed to in Paris.”

“Burning more wood makes it absolutely impossible to meet that target. We now know that if we overshoot that the consequences last for 100s to a thousand or more years. So there’s no off switch, there’s no reverse gear.”

Sources for this article include:

Black Woman Punches White Cop In the Face, Then A Black Cop Knocks Her to the Ground
May 30th, 2020 Flag And Cross 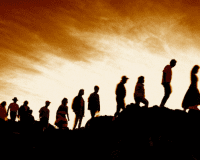 Consequences Of COVID-19 Lockdowns: “A Year’s Worth Of Suicide Attempts In Four Weeks”
June 1st, 2020 Sons of Liberty Media