The Washington Post recently published an article about Dr. Ben Carson, the Secretary of Housing and Urban Development. It started off mockingly, describing Carson’s theory that the movie The Purge could easily become reality given a specific set of circumstances. 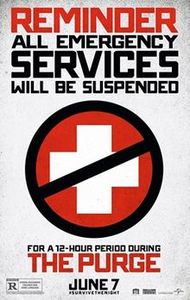 If you aren’t familiar with it, The Purge franchise is a series of movies that take place in a dystopian not-so-distant future. In that future world, things are pretty similar to how they are right now – there aren’t any flying cars or AI robots serving breakfast – except for one night a year.

And on that night, people can commit any crime without worry of punishment. Anything they do that night is legal, there are no first responders to save the victims, and there won’t be any court cases later.

It was Christmastime in Washington, and Ben Carson couldn’t stop talking about the apocalypse.

“Did you know,” the secretary of housing and urban development asked his acting chief of staff, Deana Bass, at a Capitol Hill holiday party, “that if North Korea detonated a nuclear weapon into our exosphere, it could take out our entire electrical grid?”

“What’s that movie where there’s complete lawlessness and anarchy for one night a year?” Carson said, calmly resting his right hand over his left. “ ‘The Purge’! It will be like ‘The Purge’ all the time…” (source)

And honestly, he’s not wrong. There are a lot of people out there who seem like they’d salivate at the chance to off their neighbors without any repercussions. One of the movies, The Purge: Election Year, seems particularly timely after the vitriol of the last presidential race.

We have reached an era of extreme brutality and virulent hatred that I certainly haven’t seen in my lifetime. Recently, I wrote an article based on the essay of Sir John Grubb about the end of empires and discussed unfathomable crimes.

Crimes are becoming more horrific and mindboggling. A 17-year-old girl was trying to walk home through a “no-go zone” in the UK and was sexually assaulted 3 separate times in one hour. A man in Pennsylvania tried to strangle his girlfriend to death because she changed the passcode to the IPad. A Georgia woman murdered her two toddler sons by putting them in the oven and then video-chatted their father.

A Hollywood fixture has been accused of assaulting and harassing dozens of women, which led thousands of other women to share their horror stories with a #MeToo hashtag on Twitter. I have seen report after report recently of teachers having sex with their high school students.

And things have become even more horrifying since then.

Just in today’s headlines, I saw:

And those crimes are a drop in the bucket. There are awful tales of such severe animal cruelty that I can’t get the headlines out of my mind. Tales of child abuse so mindblowing that it seems like they can’t possibly be real pop up every single day.

Complete disrespect for the political beliefs of others is now not only the norm, but it’s praised. People can lose their jobs because they voted for the “wrong” candidate. Cars with certain political stickers get targeted for vandalism. People are actually killing one another over politics. This is no longer about discourse – it’s about shouting over the people with different views.

In light of this environment, if it was totally legal to do away with people who were vocal about their different political philosophies, how far of a stretch is it to think that Dr. Carson is right about the potential of a Purge? Good people love to say how they would not participate, but if someone came for you and your family, you’d have no choice but to commit acts every bit as brutal as your attackers in order to survive.

When will it end?

Certainly, no time soon if we keep lumping people together because of who they voted for and assuming that we know everything about them based on the sticker on their back bumpers. We’ve had deeply controversial elections before and we managed to get past it, but when we generalize, we take away the humanity of the people we criticize.

When all we do is group people into “evil Republicans” and “crybaby Democrats” we miss the finer qualities of these people. And there ARE good qualities in just about every person, no matter what their political beliefs are. Even if you think someone is delusional, it’s important to try to understand the position from which they developed that perspective.

One has to wonder what it will take to bring us together. Dr. Carson strikes again with a movie reference.

…“There’s never been a time in the history of the world where a society became divided like this and did well,” Carson said as a crowd — including an off-duty New York Times reporter, D.C. Mayor Muriel E. Bowser, a slew of representatives from housing nonprofit organizations and old friends from his presidential campaign — circled him. “And we don’t really have a reason to be fighting each other. There was a movie some years ago, a Will Smith movie called ‘Independence Day’ . . .”

With his soothing, story-time cadences and heavy-lidded gaze, Carson proceeded to hold forth on how Earth’s near-annihilation laid bare the superficiality of all the world’s strife. If only, he argued, people realized that the fate of humanity hung in the balance, then Palestinians and Jews, or even the United States and Russia, could be “like best friends.” (source)

How can we help each other from a place of scorn and derision? How can we come together when we deliberately divide ourselves every single day?

Let’s hope it doesn’t take an alien invasion or epic disaster to make us mend fences. The time is coming when we’re going to need our neighbors and they’re going to need us. Hatred breeds nothing but more hatred and it’s only a matter of time before Dr. Carson is right about that whole Purge business.