On Friday, President Donald Trump asked Congress to approve $18 billion to construct the southern border wall that he promised the American people while he campaigned for the White House.

The money requested would cover the construction of the wall, which would take approximately a decade to complete.

An administration official said that the document from the Department of Homeland Security that features the $18 billion request only covers one aspect of Mr. Trump’s immigration priorities and was delivered to Capitol Hill to meet a specific request from negotiating team members.

The WSJ report said that the $18 billion would go toward 700 miles of new replacement barriers, expanding the current 654 miles of barrier to nearly 1,000 miles. It’s unclear if this funding would be part of any governmentwide spending package that’s currently being negotiated in Congress.

House Minority Leader Nancy Pelosi, D-California, reacted to the report in a letter to House Democrats Friday, “This is alarming. We must all speak out.”

I’m lost as to why this is alarming.  For one, I think illegals will just find new ways in, but I’m not necessarily opposed to a wall.  It isn’t like we don’t have borders open to the North and oceans on either coast, and there are far better solutions that would not require money for a wall and save money via the welfare system.

Yet, I have seen evidence that where border walls are placed, it does seem to curb illegal aliens greatly.  Take Hungary for instance.  Look at this chart of what took place once they took border security seriously. 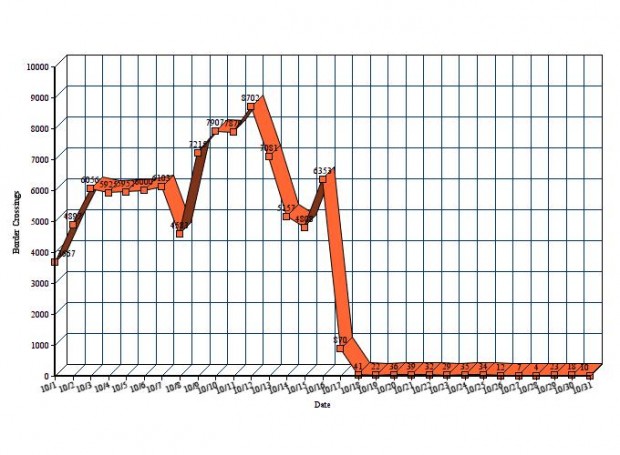 That wall reduced illegal aliens by over 99%!

However, this was promised not only by Trump but also by past Congresses.  They even appropriated the money, but the wall was never built.

President Trump also seems to want to use the funding of the wall as leverage for a deal to protect illegal aliens that Barack Hussein Obama Soetoro Sobarkah would not deport, which was his failure to uphold federal law.

On December 29, 2017, Trump tweeted, “The Democrats have been told, and fully understand, that there can be no DACA without the desperately needed WALL at the Southern Border and an END to the horrible Chain Migration & ridiculous Lottery System of Immigration etc. We must protect our Country at all cost!”

So, it appears that Trump is open to some form of amnesty, which I’m not surprised by if he is going to work out a deal with Democrats and establishment Republicans.

The thing that he would need to ensure takes place if he’s going after a deal is to get the money up front before working anything out on DACA.