The charge is often made that Christians were always soft on slavery, but that is a slander. Slavery was practiced in Old Testament times; however, it was worldwide, mainly because of almost constant wars. What few know is that slavery in Israel was not severe; it fact, it was illegal to mistreat a “slave.” The slave was really an indentured servant who was to be treated like one of the family! Any mistreatment and the servant would go free. In fact, a “slave” could walk over to a neighbor’s property and leave his slavery! However, many American Christians, especially in the South, taught that slavery was permitted and sanctioned in the Bible. They were wrong and it is a blight, especially on Methodists and Baptists of that era, because of that sin.

Moreover, as early as the first century, the Essenes (one of the three major Jewish sects of that period) prohibited slavery according to A Manual of Church History. Josephus records that Essenes existed in large numbers and thousands lived throughout Judea.

The Greek philosopher, Aristotle, thought that slavery was a natural thing and that human beings came in two types: slaves and non-slaves. Therefore, it was natural for some to rule and others to be ruled. Slaves were simply property to be used as advantageously as possible. That was in the “golden age” of Greece when pederasty, infanticide, and discerning the future by looking at the entrails of a chicken were popular! Golden age indeed!

Christianity began to change all that as it influenced a broad spectrum of the world: princes and paupers; educated and ignorant; lords and serfs; and Christians and heathen.

Christians have often been accused of being anti-science; however, such claims are made by ignorant or bigoted men. Dr. Rodney Stark, a professor of sociology and comparative religion, states in his For the Glory of God, “The leading scientific figures in the sixteenth and seventeenth centuries overwhelmingly were devout Christians who believed it was their duty to comprehend God’s handiwork.” Without the work of Bible-believing scientists such as Isaac Newton, Lord Kelvin, Joseph Lister, Johann Kepler, Robert Boyle, Gregor Mendel, Michael Faraday, Joseph Priestly, and others the world would not be nearly what it is today.

Michael Faraday was a scientist and evangelical Christian whose pioneering work changed the modern world in that he helped give us electricity and was the founder of the Greenwich Observatory.

Johann Kepler, an active Christian and creationist was best known for his laws of planetary motion. He was a mathematical genius who made contributions to the Copernican concepts and for his own additions to astronomy. His work provided a foundation for Isaac Newton’s theory of universal gravitation.

Isaac Newton was reared in a Christian home and went to the university primarily with the purpose of entering the Christian ministry. Instead, he discovered universal gravity.

Joseph Priestly was an 18th-century English theologian, natural philosopher, chemist, and author of 150 books. He was identified with the English dissenters during the religious confrontations. He has historically been credited with the discovery of oxygen.

John Locke was reared in a Puritan home, a fact reflected in his writing and political positions and Emmanuel Kant had his roots deep in the pietist foundations.

Christian leaders started and helped fund schools for infants and cripples, rescue homes, help for the poor, the sick, and the mentally abnormal, service for discharged prisoners and the families of prisoners, lodging houses, clubs for apprentices, and campaigns against beggary, drunkenness, and prostitution.

Pastor Theodore Fliedner in Kaiserswerth inaugurated a home for discharged women convicts and influenced Florence Nightingale who went on to create the modern nursing profession.

Anthony Ashley Cooper grew up in a moderately religious home but became a Christian because of his childhood nurse. As a member of the English Parliament, he strongly advocated better treatment of the insane, legislation that improved working conditions in mills and factories, and limiting the working day to ten hours. His work led to the barring of boys under thirteen and women from the mines, protection for chimney sweeps, and an act which brought improved housing conditions.

Missionary followers of Jesus are credited with stopping cannibalism and head hunting in many primitive societies.

The influence of Jesus on society via music, art, architecture, and literature is impossible to quantify.

Because Christ was born, we have literature by such Christian writers as Bunyan, Dante, Chaucer, Donne, Dostoevsky, Dickens, Milton, and Shakespeare. Regarding Shakespeare, William Burgess in his The Bible in Shakespeare wrote, “it is seen that Shakespeare drank so deeply from the wells of Scripture that one may say, without any straining of the evidence, without the Bible Shakespeare could not be.”

Had Jesus never been born, music would not be comparable to what we experience. Handel, Vivaldi, and Bach were professing Christians who worked to honor God with their work. Bach, for example, signed all his works with Soli Deo Gloria or “Solely to the glory of God.”

Many of the art productions would be absent without the Christian-themed artistry of da Vinci, Michelangelo, Rembrandt, and countless others.

And think of all the incredible architecture through the years. Especially noteworthy are the beautiful cathedrals in Europe. I am not an advocate of Roman Catholicism but they built the most incredible cathedrals in the world.

Christians don’t claim that the U.S. Constitution is overtly Christian, but no informed person doubts that its basis comes from biblical teaching. Our civil laws are obviously based on the Ten Commandments. Also, the incredible principle of the judicial, legislative, and executive branches is taken directly from Isaiah 33:22. Requiring at least two witnesses to a crime comes directly from the Bible. At least 50 of the 55 signers of the U.S. Constitution were orthodox Christians.

Cynics and critics can criticize Christianity that has failed at times to live what it professes, but they have no valid complaint against Christ. His life, death, and resurrection have made a greater impact on the world than any other person who ever lived. He sure has changed the world and made it infinitely better.

Has He changed you?

Boys’ new book  Muslim Invasion: The Fuse is Burning! was published by Barbwire Books; to get your copy,  click here. An eBook edition is also available.

(Dr. Don Boys is a former member of the Indiana House of Representatives; ran a large Christian school in Indianapolis, wrote columns for USA Today for eight years; authored 16 books and hundreds of columns and articles for Internet and print media publications; defended his beliefs on hundreds of talk shows. These columns go to newspapers, magazines, television, and radio stations and may be used without change from title through the end tag. His web sites are www.cstnews.com and www.Muslimfact.com and www.thegodhaters.com. Contact Don for an interview or talk show.) 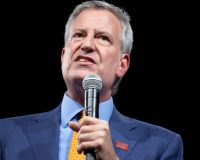