The Vegas Plot Thickens: The Connection Between the Shooter and an Intelligence Agency

Posted by The Daily Sheeple on D.C. Clothesline

A few internet sleuths have taken matters into their own hands after the obvious disinformation campaign by the mainstream media surrounding the Las Vegas shooting. Mounting evidence of what looks like a false flag is worrying many. And once you read this, those fears will be shoved into overdrive.

On the surface, the tweet doesn’t say much. But how much can Mike Toke really say in a limited amount of characters? But what he does manage is enough to get anyone seeking the truth to follow all these leads and look into everything that the media and our government continues to hide from us. It’s what’s embedded in the tweet that counts. 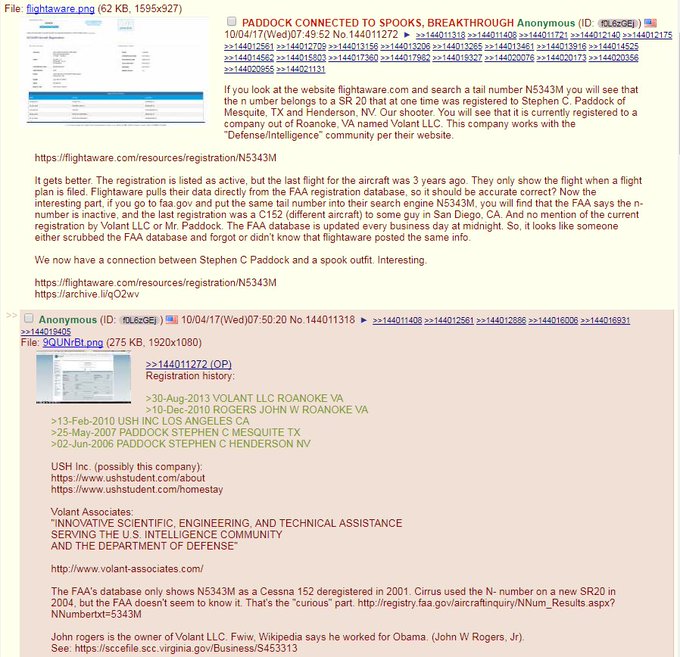 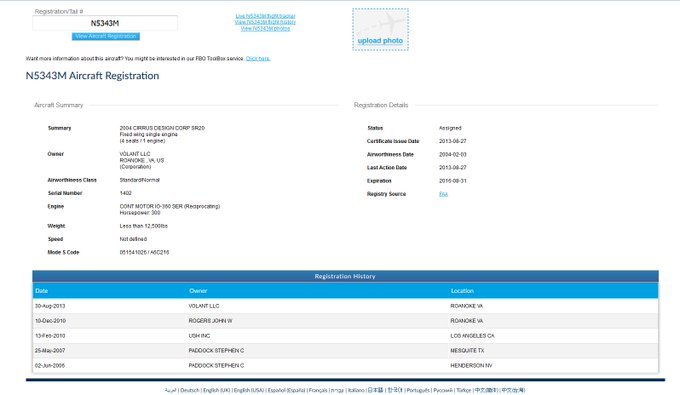 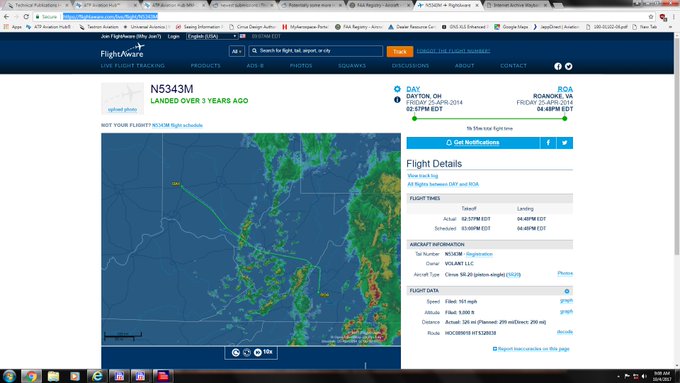 BREAKING: Users on /pol/ have discovered flight records and a plane that belonged to the Las Vegas Shooter. It is connected to an intelligence contractor who’s owner previously worked for the Obama administration.

Looking closely, the first thing you will notice is that the shooter, Stephen Paddock, had a pilot license and owned two planes. This is well-established fact. The tail number of one of those planes is N5343M, a Cirrus SR-20. You can see that this was owned by Paddock by going to the website Flightaware.com. But Paddock doesn’t own this plane anymore. It was grounded three years ago, and it’s now in the hands of none other than Volant LLC, which there is little information on.

However, Volant Associates is none other than a Department of Defense contractor. Meaning Paddock’s plane has been in the hands of the United States government for the past three years and grounded since – if Volant LLC is being used as a way to hide information. Considering what Volant Associates does, that wouldn’t be so far fetched.  But the plane’s information is all easily verified here on Flightaware.com. It’s been in Roanoke, Virginia since April 25, 2014.

Volant’s describes it’s mission on their website as providing “the industry’s preeminent professionals to discriminating U.S. government and intelligence-and-defense-industry customers.”

The registration of this plane is also listed as “active” even though it hasn’t been flown in three years. Strange enough yet? Well, it gets even better. The FAA should have this same information. But they don’t. Their website shows that a different aircraft, a Cessna 152, maintains that tail number and it was last registered to a person in San Diego, California. The FAA (Federal Aviation Administration) is a government agency, and it appears that it has scrubbed this plane’s information. Now, why would they do that? Well, the plot still thickens.

There is little to be known about Volant LLC., in Roanoke, Virginia. A company big enough to have a plane should have a website, at least that would be the assumption. But a Google search netted very little information other than they provide “business services.” But Volant Associates is a completely different matter. That’s your defense contractor. And their website says they are located in Chantilly, VA, which wouldn’t be too far from Volant LLC. in Roanoke. And a quick Google search of that verifies that the two cities are only 219 miles apart. So is Volant LLC., a cover company for the defense contractor? Is this a coincidence?

For a list of all of the contracts between Volant LLC. and the government, click here. They have worked for the Obama Administration. Could Paddock’s plane have been used in other scandals, such as the Fast and Furious gun running scheme? Who knows, and at this point, we may never know.

What all this means is entirely speculation right now. But isn’t is strange that this information is being kept from the public, and those who seek the truth are stuck finding it on their own?

BY THE NUMBERS: Here’s How Much The Pentagon Has Paid For Trans Issues … So Far
June 25th, 2021 Clash Daily