Home / FEATURED ARTICLES / Is it Ever Okay to Refuse to Salute (or sing or pledge) to the U.S. flag?

Is it Ever Okay to Refuse to Salute (or sing or pledge) to the U.S. flag?

Little children, keep yourselves from idols.

Is it ever okay to refuse to salute the U.S. flag?

Is it ever okay to refuse to sing the U.S. national anthem?

Is it ever okay, or maybe even proper, to refuse to take pledges of loyalty to the indivisible power of whatever State rules at any given time? Is it ever wise to embrace the notion of such indivisible power? (See: Would the Founding Fathers say the Pledge of Allegiance?)

Is it okay to think or maybe even ask such questions out loud in “the land of the free” and the home of the NSA? Will good, freedom-loving Americans welcome such questions? Or will they recoil from them and try to wish or ignore them away?

What does today’s emotion-driven rambling about flags, songs, and pledges tell us about whether we’re heading toward more true freedom, liberty, and justice in America, or whether we’re continuing our loooooooong State-managed march away from these things?

While we’re kicking these ideas around, I’d like to share a little bit of important American history that most Americans don’t know about the U.S. flag, U.S. public schools, and the U.S. Pledge of Allegiance.

Let’s kick of this little stroll down a near-universally avoided stretch of Memory Lane by taking in some pictures from U.S. history of U.S. kids saluting the U.S. flag in (and around) U.S. schools: 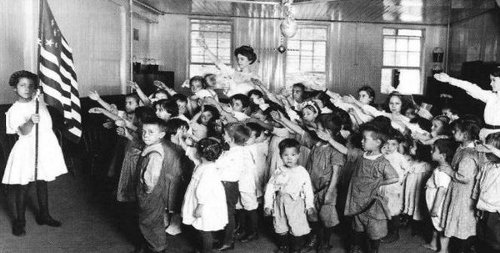 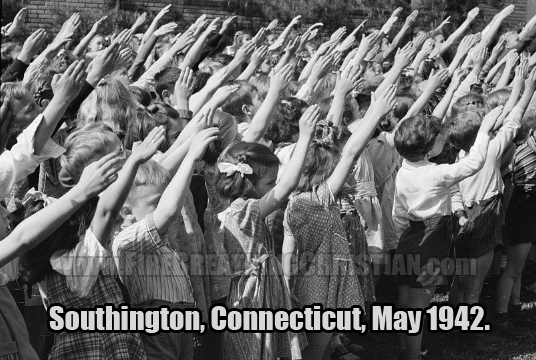 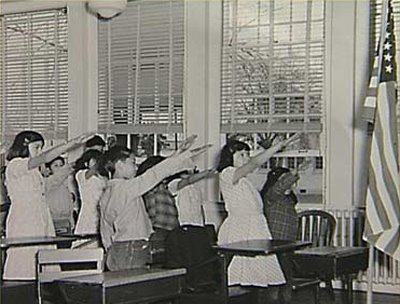 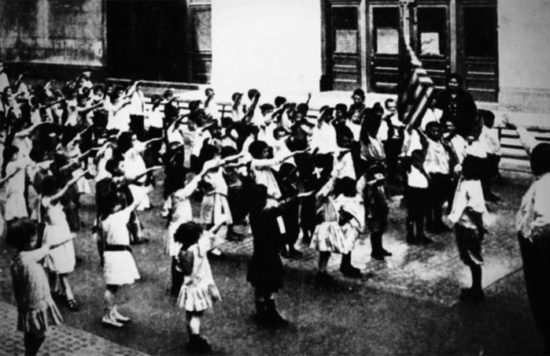 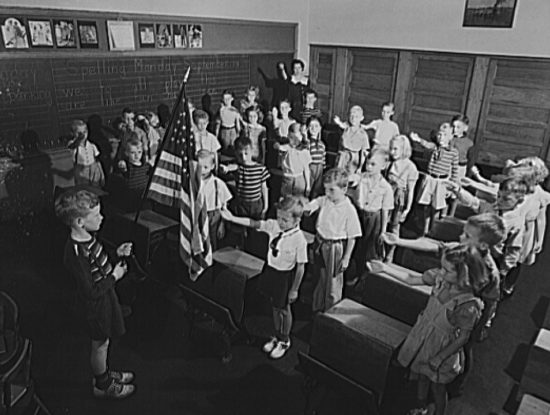 I could literally go on and on with these. There are many similar shots from U.S. public school history to share.

Because the now-infamous Socialist salute was a standard accessory for U.S. children while taking the U.S. pledge to the U.S. flag in U.S. government run schools, as late as the 1940s, when, for obvious reasons, the Socialist salute became a little uncomfortable by way of association with a particular flavor of Socialism – the National Socialism (Nazism) of Hitler’s Germany.

How could this have happened? Why would we here in “the land of the free” and the home of the NSA ever have considered doing such a thing?

Because long before Hitler fanned the flames of his brand of national Socialism, we fanned the flame of ours, and nobody fanned those flames more purposefully than Francis Bellamy, the Socialist who wrote the U.S. Pledge of Allegiance.

Please don’t skip over the significance of that last line there: The Socialist who wrote the U.S. Pledge of Allegiance.

Let it soak in.

Yes, a flaming Socialist wrote The Pledge that so many “conservative Christians” cherish and defend like a spit-shined golden calf of their very own these days in America.

Think about that for a while, please.

And don’t get mad at me for pointing this stuff out, okay? These are facts. This is history.

All that should really matter is whether these things are true or not, right?

The U.S. Pledge of Allegiance was written by a Socialist in the late 1800s for the purpose of promoting the sale and use of U.S. flags in government schools, using The Pledge in conjunction with The Flag to instill in the minds of the young a devotion to the indivisible power of the American State above them.

Please let that soak in, too: The U.S. Pledge of Allegiance was written by a Socialist in the late 1800s for the purpose of promoting the sale and use of U.S. flags in government schools, using The Pledge in conjunction with The Flag to instill in the minds of the young a devotion to the indivisible power of the American State above them.

I hate to be so repetitive, but, honestly, 99% of self-identified “conservatives” in America have such an amazing capacity to ignore this kind of thing that I feel compelled to spell it out again and again.

With the big giant flaming neon-lit link of Socialism established between the national Socialism of Germany in the mid-twentieth century and the American version of Socialism here in the twentieth and twenty-first centuries, let’s consider a famous photo of what Americans tend to champion (and rightfully so) as a remarkably inspiring example of going against the flow of a culture gone mad around you: 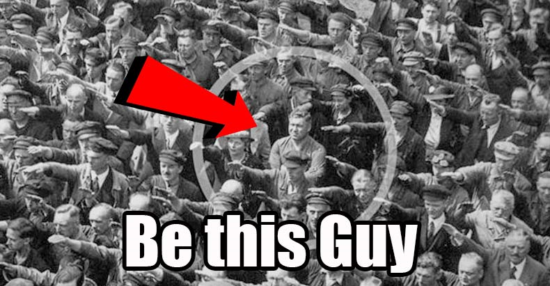 This shot of a man refusing to give the Socialist salute even while the crowd all around him is doing so has been hailed as a sterling example of what a thinking, principled man ought to look like in a crowd of State-programmed drones. The picture has become iconic, and for good reason.

This stirring example of a single brave man standing against the patriotic Socialist tide around him is what inspired us to craft the following: 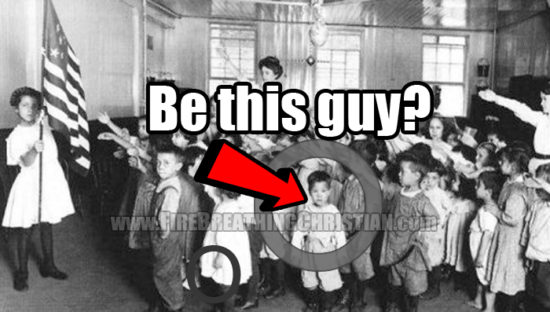 Questions like: Is the Socialist-written Pledge of Allegiance to the United States somehow less Socialist because it’s wrapped in the American flag?

We need to think about these things…and act accordingly.

We need to be like the brave man in the Nazi rally photo.

And maybe like the little boy in the other shot, too. 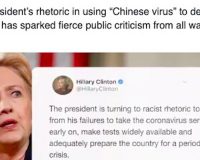