After watching the terrible series of cascading disasters on the Texas Coast after Hurricane Harvey, we know for a fact that the aftermath of a catastrophe can be just as bad (and sometimes worse) than the initial event. There’s a terrifying potential threat in Florida in the form of 3 nuclear plants, two of which are directly in the projected path of Hurricane Irma. Could Florida’s nuclear plants turn Hurricane Irma into the American version of Fukushima?

To be fully prepared for the possibility, people should be ready for the potential of a simultaneous hurricane and nuclear disaster.

Where are the nuclear plants?

Florida boasts of these nuclear facilities:

The Crystal River Coal and Nuclear Power Plant on the map has now been decommissioned and is said to pose no threat.

The first two plants on the list are right in the projected path of the eye of Hurricane Irma. See the map below.

Turkey Point is south of Miami and St Lucie is north of Fort Lauderdale and Palm Beach. 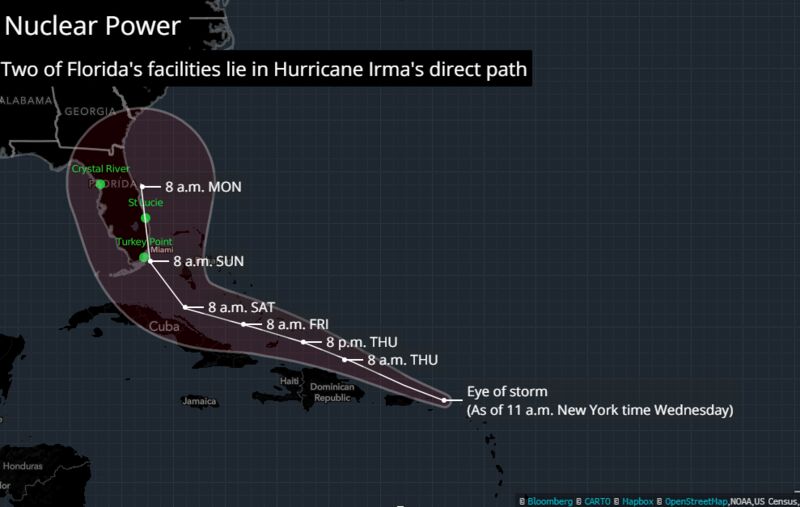 This isn’t their first rodeo.

The nuclear plants have weathered some pretty major storms before. Turkey Point withstood Hurricane Andrew, despite some damage.

In 1992, Turkey Point withstood Hurricane Andrew, a Category 4 storm and one of the strongest the country has experienced seen. The plant sustained $90 million in damages and had to run on backup generators for more than five days. Its access road was blocked, communication systems shut down, and fire protection system damaged. The exhaust stack of one of its oil-powered units cracked.

Yet the reactors, shielded by six feet of steel-reinforced concrete and 20 feet above ocean level, remained unscathed. No radioactive material leaked, according to the Federal Nuclear Regulatory Commission. (source)

The St. Lucie plant withstood a hit from Hurricane Frances in 2004 and Hurricane Wilma in 2005.

But none of the previous storms were as powerful as Hurricane Irma is expected to be.

What is being done to prevent a nuclear disaster?

Unlike the Fukushima disaster, which was sudden and unexpected, the management of these plants knows what is coming. While Florida Power and Light (FPL) hasn’t yet made the decisions to shut down the plants, the idea is a possibility.

Peter Robbins, spokesman for FPL, said shutting down a reactor is a gradual process, and the decision will be made “well in advance” of the storm making landfall.

“If we anticipate there will be direct impacts on either facility we’ll shut down the units,” he said…

…Robbins said the plant’s reactors are encased in six feet of steel-reinforced concrete and sit 20 feet above sea level. Turkey Point has backup generators, extra fuel and, as a “backup to the backup,” replacement parts and materials can be flown in from Tennessee.

So, to be clear, they have not yet begun the “gradual process” of shutting down the plants, nor have they even made the decision to do so.

For five years after the Fukushima disaster, residents within 20 kilometers (about 12 miles) were not allowed to go back to their homes. Despite the fact that potentially hazardous radiation remains in the area, some people have now opted to return. Dangerous levels of radiation were detected as far as 200 miles from the disaster, and contamination traveling in the Pacific Ocean reached the western shores of the United States. (source)

How do you prepare for a nuclear incident caused by a natural disaster?

Inside the core of a nuclear reactor are thousands of long, thin fuel rods made of zirconium alloy that contain uranium. When a reactor is turned on, the uranium nuclei undergo nuclear fission, splitting into lighter nuclei and producing heat and neutrons. The neutrons can create a self-sustaining chain reaction by causing nearby uranium nuclei to split, too. Fresh water flows around the fuel rods, keeping the fuel rods from overheating and also producing steam for a turbine.

But if not enough water flows into the reactor’s core, the fuel rods will boil the water away faster than it can be replaced, and the water level will decrease. Even when the reactor is turned off so nuclear reactions no longer occur, the fuel rods remain extremely radioactive and hot and need to be cooled by water for an extended period of time. Without enough water, the fuel rods get so hot that they melt. If they begin to melt the nuclear reactor core and the steel containment vessel, and release radiation into the environment, nuclear meltdown occurs. (source)

Fortify your home against fallout.

Have enough supplies on hand to wait out the danger.

As with many emergencies, you need to be prepared to survive at home without help from anyone. It’s unknown whether water and electricity will be running, and if the water is running, whether it will be safe to drink. Prep as though you won’t have access to these utilities and if you do, then it’ll be a pleasant surprise.

Learn everything you can.

This is an overview but there is much more to learn about a nuclear event and the more knowledge you have, the more likely you are to survive without any ill effects.

Lisa Bedford and I created a course over at Preppers University called The Nuclear Preparedness Intensive. It contains 2 hours of interviews with a military nuclear expert, hundreds of pages of downloadable information, shopping lists, military guides, and far more information than I could ever put together in a blog post. With this course, you will truly know everything that I know about surviving a nuclear attack. It costs $29. You can learn more about it here. We had been working on this for quite a while, but with the uptick in rhetoric, we decided now was the time to introduce the class. It will really help you be prepared.

For some free additions to your nuclear library, you can print out this manual from the US government about surviving a nuclear emergency. It was written with first responders in mind, but much of the information would be applicable for us, too. The book, Nuclear War Survival Skills, by Cresson Kearney, is also available for free online.

The more you know, the better your chances are of unscathed survival. (source)

Supplies in Florida are mostly sold out. Products you order through Amazon Prime have a possibility of arriving before the storm, particularly if you are not in the Southernmost part of the state. But order immediately. Check what the projected arrival date of the supplies will be before completing the order.

If you can’t buy water, use every vessel in your home to fill with tap water. You may be able to still purchase empty containers at the store, even if bottled water is sold out.

Keep up to date with the situation by signing up for my daily newsletter.

You really should evacuate NOW if you can at all.

This is not your average hurricane. It is due to be one of the most powerful hurricanes to have hit the continental US in recorded history.

While it’s easy to give the advice to evacuate, there are some mitigating circumstances. Not everyone who is staying behind is doing so stubbornly. The roads out of Florida are so jammed that they look like parking lots. Many fuel stations are out of gas, which means people are unable to drive out of the area. Public transit like trains and buses are sold out, and the price of an airline ticket out of Florida has skyrocketed to over a thousand dollars. That’s PER TICKET, so you have to multiply that by the size of your family.

I see a lot of callousness in the comments on the website and on social media from smug folks who are arm-chair quarterbacking from the comfort of a home far away from potential disaster. While it’s easy to say offhand, “Anyone who stays is just stupid and doesn’t deserve to be rescued, blah blah blah,” one really shouldn’t judge those who have remained behind, what with the difficulties and expense in the transportation system. Keep in mind it’s this bad 4 days before the storm is due to hit and it’s only going to get worse.

Remember, it rarely stops with just one disaster.

If you have remained in your home, do some research about the aftermath of Hurricane Harvey. Remember that it won’t be over with the initial disaster. Florida has the addition of potential for a nuclear disaster which makes it all the more terrifying. Pack out your most important possessions, plan for your pets, and educate yourself about all of the horrifying possibilities so that you can create a plan to deal with them. Don’t forget to be prepared for looters who will be out in force as soon as the winds have stopped blowing.

I’m wishing you the very best, whether you are stranded in the hurricane zone or evacuating.

18 Ways Trump Did The Very Opposite Of Drain The Swamp During His Presidency
January 25th, 2021 Sons of Liberty Media