FEATURED ARTICLES The U.S. Military Will Be Conducting ‘A Major Military Exercise’ On The...

The U.S. Military Will Be Conducting ‘A Major Military Exercise’ On The Korean Peninsula During The Solar Eclipse

On August 21st, approximately 25,000 U.S. troops will join “tens of thousands” from the South Korean military to conduct a “major military exercise” that is already triggering threats from North Korea.  Considering the fact that any sort of provocation could cause a nuclear war to erupt on the Korean peninsula, is this really a wise thing to do?  The more research that I do on this upcoming solar eclipse, the stranger things become.  When I first started hearing about this eclipse many months ago, I didn’t pay too much attention, but now after looking into it extensively I do believe that it is going to be quite significant.

And I didn’t even know about this major military exercise that will happen during the eclipse until today.  The following comes from MSN…

The U.S. military is preparing to launch a major military exercise with South Korea in coming days, and faces a dangerous balancing act: How do you reassure allies in the region that you are ready for a war with North Korea without provoking an actual conflict in the process?

The annual Ulchi-Freedom Guardian exercise is scheduled for 10 days beginning Aug. 21, and will include about 25,000 U.S. troops along with tens of thousands of South Koreans. The exercise focuses on defending South Korea against an attack from the north, and each year triggers threats and rebukes from North Korea. But it comes at an especially sensitive time now, following the exchange of a series of threats between President Trump and North Korea.

Another thing that we just found out is that meteorologists are warning that a major hurricane could potentially start approaching the east coast of the United States during the time of the solar eclipse.  It has been almost 12 years since a major hurricane made landfall in this country, and so it is very odd that this would be happening all of a sudden.

As I have discussed previously, many believe that the upcoming solar eclipse and the 40 day period that follows may be some type of “warning” for America.  And traditionally, this 40 day period has been a time of repentance for the people of Israel…

On August 21, a total solar eclipse will mark a trail from the Northwest US to the Southeast Atlantic Seaboard. The eclipse will occur on the last day of the Hebrew month Av, a day known as Yom Kippur Katan, the “small day of repentance.” The morning after the eclipse, Jews will  begin blowing the shofar every morning for a 40-day period of profound repentance leading up to Yom Kippur. This corresponds to the 40 days Moses was on Mount Sinai atoning for the Jewish people.

It is also very interesting to note that this eclipse comes exactly 33 days before the “Revelation 12 sign” that will appear in the heavens on September 23rd.  The first state that the solar eclipse of August 21st will cross will be Oregon, and many have noted that Oregon is our 33rd state.  And the solar eclipse will finish crossing the nation on the 33rd parallel in the state of South Carolina.

So is that just a coincidence? 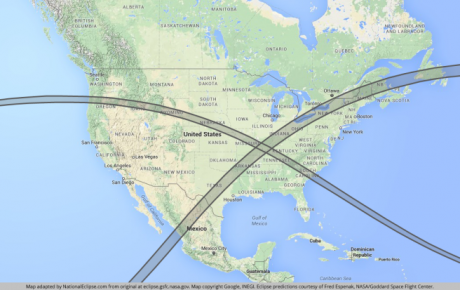 And this eclipse is just the beginning.  Over the subsequent 40 days there are quite a few critical events that people are buzzing about.  The following list comes from one of my previous articles…

An exercise sponsored by FEMA and the U.S. Department of Energy set to take place on August 23 called EarthEX2017 will wargame responses to catastrophes such as mega earthquakes, cyber terrorism or high altitude electromagnetic pulse attacks.

The exercise will simulate a “subcontinent-scale, long duration power outage, with cascading failures of all other infrastructures,” according to the official Earth Ex website.

“Black sky events” are defined as, “Catastrophic occurrences caused by man or nature that bring society to its knees.”

September 1 – The U.S. State Department’s ban on U.S. citizens traveling into North Korea goes into effect.  Many are concerned that this is yet another sign that we are moving toward war with North Korea.

September 23 – This is the date of what has become known as “the Revelation 12 sign”.  If you are not familiar with this alignment yet, the following is a very brief summary…

On September 23rd a unique astronomical alignment of the Sun, Moon, constellation Virgo, constellation Leo, and planets Jupiter, Mars, Mercury, and Venus is going to fulfill this passage from the book of Revelation:

And a great sign appeared in heaven: a woman clothed with the sun, with the moon under her feet, and on her head a crown of twelve stars.  She was pregnant and was crying out in birth pains and the agony of giving birth.

September 24 – Very important national elections will be held in Germany.

September 29 – Yom Kippur begins at sunset, and it concludes on September 30th.  Of course September 30th will be the end of a 40 day period that began back on the day of the Great American Eclipse on August 21st.

September 29 – U.S. Treasury Secretary Steven Mnuchin says that the debt ceiling will be breached on this day if Congress does not raise it by then.

September 30 – If Congress does not pass a budget by the end of this day, there will be a government shutdown just like we witnessed in 2013.

And all of this comes at a time when anger, hatred and racial tension are reaching a fever pitch in this country.

Let us pray for peace both at home and abroad, because at this moment we are rapidly approaching a boiling point.