ECONOMY ‘When I say cut taxes, I don’t mean fiddle with the code....

‘When I say cut taxes, I don’t mean fiddle with the code. I mean abolish the income tax and the IRS, and replace them with nothing’

The quote in the headline comes from Ron Paul, and it should be the goal of every conservative lawmaker in the entire country.  When professional politicians tell you that they are in favor of reforming the tax code or reducing taxes a little bit, essentially what they are telling you is that they are perfectly fine with the status quo.  They may want to tweak things slightly, but in general they are content with big taxes, big spending and big government.  I spent an entire year getting a Master of Laws in Taxation at the University of Florida Law School, and in my opinion the best thing that Congress could do to the tax code would be to run it through a shredder and put it in a dumpster.  As I noted the other day, the tax code is now more than four million words long and it takes Americans about six billion dollars a year to comply with it.  Those that believe that they are offering the American people a “solution” by proposing to tinker with this abominable mess are just fooling themselves.

The only long-term solution that is going to work is to get rid of the entire steaming pile of garbage.  Ron Paul understood this, and we would be very wise to take his advice.  The following is the full version of the quote from the headline above…

“By the way, when I say cut taxes, I don’t mean fiddle with the code. I mean abolish the income tax and the IRS, and replace them with nothing.”

If I run for Congress, and I am very strongly leaning in that direction, this is what my position on taxes is going to be.

Of course we are going to have to dramatically change the composition of the House and the Senate in order to get this done, so in the short-term we may have to focus on reducing tax rates and the size of the tax code by as much as possible.

But ultimately, the goal will be to abolish the tax code and the IRS altogether.

We have become so accustomed to an income tax that many of us couldn’t possibly imagine a society without one.  But today there are seven states that do not have one, and that includes very big states such as Texas and Florida.  And from 1872 to 1913, there was no federal income tax.  When a federal income tax was finally reinstituted in 1913, the rates were extremely low.  The following comes from Politifact…

The 1913 law imposed a tax of 1 percent on income up to $20,000, for both individual and joint filers. However, exemptions from the tax — the first $3,000 of income for individuals and the first $4,000 for joint filers — meant “virtually all middle-class Americans” were excused from paying, according to W. Elliot Brownlee’s book, Federal Taxation in America. The law also put in place a graduated surtax on incomes above $20,000; the highest rate paid, 7 percent, applied to Americans making more than $500,000 (about $11.4 million in 2011 dollars).

So how did things go for our country during the four decades when there was no federal income tax?

Well, if you regularly follow my work you already know the answer to that question.

That period of time just happened to be the best period of economic growth in U.S. history.

Oh, but we wouldn’t want to change from the way things work today, would we?  After all, the U.S. economy has grown at a blistering average yearly rate of just 1.33 percent over the past decade, and we are actually behind that pace so far in 2017.

If you want a no growth economy and a steadily shrinking middle class, then our current system is perfect for you.

But I believe that we can do so much better.

So how are we going to fund the federal government if we eliminate the income tax?

Well, the truth is that taxing individual incomes accounts for only 46.2 percent of all federal revenue.  The federal government has lots of other ways that it raises money, but of course we wouldn’t be able to keep the massively bloated federal bureaucracy that we have today.  We would need to reduce the size and scope of the federal government to an appropriate constitutional level, and of course most politicians on the left would resist this greatly.

There are some federal agencies and programs that we could completely eliminate altogether.  If it was up to me, the EPA, the Department of Education and the BATFE would be good places to start.  Any essential functions that they are currently performing could easily be absorbed by other agencies.

There are very few politicians in our entire country that will still talk like this, because our leaders have taken us so far down the road toward “a social state” that most Americans don’t even know what “limited government” looks like anymore. 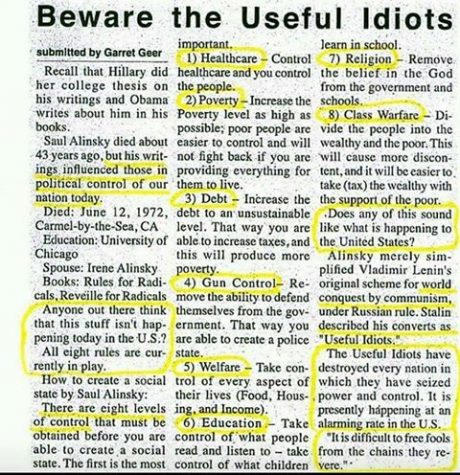 Over the past several decades, the left has made a tremendous amount of progress toward achieving the goals that Saul Alinsky originally outlined in Rules for Radicals.  Obamacare was a giant step toward federal control over our healthcare system, poverty is exploding as the middle class shrinks, we are nearly 20 trillion dollars in debt, our public schools have become left-wing indoctrination centers, and God has been pushed out of almost every corner of public life.

We should be very thankful that we got Donald Trump instead of Hillary Clinton, but many radical leftists consider Trump to simply be a bump in the road on the way to completely eradicating our way of life.

They want to criminalize what we believe by making it “hate speech”, they want to steal the minds of the next generation by dominating our system of education, and they want to use government institutions and the legal system as tools to completely reshape society in their image.

The DC Criminals Are At It Again – Depriving Citizens Of Their Rights Under The Guise Of Protection
January 18th, 2021 Sons of Liberty Media

Richard Grenell claims ‘she’ will be ‘shadow president’ — and he does not mean Kamala
January 18th, 2021 Liberty Unyielding

Watching the mainstream media or seeking some insights from social media, is today, the equivalent of filling you gas tank with water and expecting...
Read more
ELECTION 2020

The rush to roll out a COVID vaccine is having adverse affects - like death.   By Bradlee Dean “VACCINE DEATHS, ADVERSE EFFECTS” (TCP News) Recently, a friend...
Read more