U.S. NEWS They Are Killing Small Business: The Number Of Self-Employed Americans Is Lower...

They Are Killing Small Business: The Number Of Self-Employed Americans Is Lower Than It Was In 1990

After eight long, bitter years under Obama, will things go better for entrepreneurs and small businesses now that Donald Trump is in the White House?  Once upon a time, America was the best place in the world for those that wanted to work for themselves.  Our free market capitalist system created an environment in which entrepreneurs and small businesses greatly thrived, but today they are being absolutely eviscerated by the control freak bureaucrats that dominate our political system.  Year after year, leftist politicians just keep piling on more rules, more regulations, more red tape and more taxes.  As a result, the number of self-employed Americans is now lower than it was in 1990… 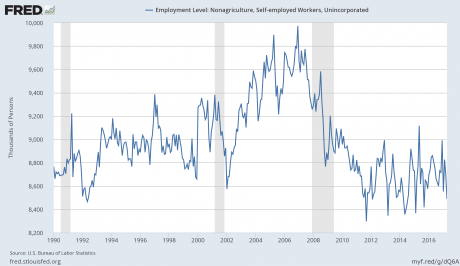 What this means is that the percentage of the population that is self-employed is way down.

In fact, one study found that the percentage of Americans that are self-employed fell by more than 20 percent between 1991 and 2010.

And if you go back even farther, the numbers are even more depressing.  It may be hard to believe, but the percentage of “new entrepreneurs and business owners” declined by a staggering 53 percent between 1977 and 2010.

Sometimes I like to watch a television show called Shark Tank, and on that show they make it seem like entrepreneurship in America is thriving.

But the exact opposite is actually the case.  In a previous article, I discussed how the number of new businesses being created in the United States has been steadily falling over the years.  According to economist Tim Kane, the number of startup jobs per one thousand Americans has been declining for several consecutive presidential administrations…

So why is this happening?

As I mentioned at the top of this article, self-employed Americans are being absolutely strangled by oppressive rules, regulations and taxes.

To illustrate this point, I would like to share with you some quotes from an open letter that was authored by a small business owner named Don Chernoff…

#1 I work for myself and have to pay my own medical expenses. Before the “affordable care act” I was paying about $200 per month for a high deductible policy. It was far from perfect but it got so much worse under the “Affordable” care act.

#2 I have to spend dozens of hours and thousands of dollars for a tax accountant each spring to prepare my taxes because I cannot possibly understand how to do it myself, and I have a master’s degree in engineering.

#3 Many years ago when I quit a perfectly good job to start my own small business, I was shocked to learn that I had to pay both my share and what had been my employer’s share of Social Security.

#4 Between state, federal and local taxes you’ve probably paid 50% or more of your income in taxes, but that’s not enough for politicians.

If you’ve been lucky enough to have created a business you can sell, now you’ll get to enjoy paying another tax on the capital gain from the sale.

This is another reason why we need a conservative revolution in Washington.  We should demand that our members of Congress lower tax rates dramatically, completely eliminate the self-employment tax, greatly simplify the tax code and get rid of as many regulations on small business owners as possible.

In fact, if it was up to me I would abolish a number of federal agencies completely.

What we are doing right now is not working.  Small businesses have traditionally been one of the main engines of economic growth in this country, but thanks to the left they are unable to play that role at the moment.

It isn’t an accident that over the last ten years the U.S. economy has grown at exactly the same rate as it did during the 1930s.

If we want our economy to be great again, we need to go back and start doing the things that made it great in the first place.  If we continue to suffocate our economy, we will continue to get the same results.

And with each passing day, we get more signs that the economy is heading into another major downturn.  For instance, we just learned that Sears is closing 30 more stores on top of the 150 that had already been announced…

Sears Holdings, which wasn’t shy when it announced at the start of the year that it is closing 150 underperforming stores, has quietly added at least 30 more to the list.

Another 12 Sears stores and 18 Kmarts are among the locations that are closing, from Carson, Calif., to Hialeah, Fla., with most scheduled to shut their doors in July, based on calls to the stores, malls and confirmation in local media.

At the start of the year, the retailer pinpointed the 150 stores it said it would close. But it declined this week to provide a list of additional locations that are slated to shut since then, saying that it update store counts each quarter.

In addition, we just learned that new home sales in April were 11.4 percent lower than they were in March…

If you’re surprised by the collapse in new home sales in April, then you’re not paying attention.

The 11.4% MoM plunge in new home sales in April was 5 standard deviations below expectations and the biggest since March 2015.

Yes, the stock market is holding up for the moment, but for most Americans the “real economy” just continues to deteriorate.  Just because we are at the end of a giant financial bubble does not mean that everything is going to be okay.

The numbers that I brought up in this article are just another example of our long-term economic decline.  In a healthy economy, entrepreneurs and small businesses would be thriving.  But instead, they are being systematically strangled out of existence by a political system that is wildly out of control.

ANTIFA and BLM caused the Capitol riots - and they were all paid to do so.   By Rev. Austin Miles (TCP News)  The lying newspapers today...
Read more
FEATURED ARTICLES

The Joe Biden administration to "root out" those considered dangerous to America - like conservatives.   By Greg Holt (TCP News)  It is happening, the reshaping of...
Read more