Mount St. Helens, Mount Rainier and Mount Hood are all major volcanoes that lie along the infamous “Ring of Fire” that runs down the west coast of the United States, and all of the seismic activity that has been taking place in the region has many concerned about what may happen next.  Earlier this month, I wrote about how 45 earthquakes of magnitude 2.5 or greater hit Alaska in just one 24 hour period.  This week, it is volcanic activity that is raising concerns.  The earthquake swarms at Mount St. Helens are making headlines all over the globe, and on Tuesday two major volcanoes in Alaska suddenly erupted on the exact same day…

An eruption at Bogoslof volcano – one of two to erupt in the Aleutian Islands Tuesday – is its first after more than two months of inactivity, causing ash to fall in a nearby community before drifting south over the Pacific Ocean.

The Alaska Volcano Observatory said Tuesday night’s eruption at the volcano about 60 miles west of Unalaska, which began just after 10:30 p.m. and lasted for 73 minutes, sent a plume to an altitude of 34,000 feet.

Overall, 39 volcanoes around the world are either erupting right now or have recently erupted according to Volcano Discovery.

Most of those active volcanoes are along the Ring of Fire.

Fortunately, the U.S. portion of the Ring of Fire has been less active than other areas in recent years.  But experts assure us that will eventually change because seismic tension continues to build.  One example of this is what is happening at Mount St. Helens right now.  According to scientists, the famous volcano is currently going through what is known as a “magma recharge”…

Since mid-April, small earthquakes have been cropping up deep beneath Mount St Helens at ‘relatively high rates,’ bringing roughly one tremor every few hours.

In the last 30 days, scientists have located 55 seismic events in the vicinity, and say there may be well over 100 earthquakes linked to the swarm so far.

The activity falls in line with magma recharge thought to be underway since 2008.

Someday it will erupt again, and the geologists that monitor these things are watching the latest developments very carefully…

“Mount St. Helens is at normal background levels of activity,” Liz Westby, a geologist with the U.S. Geological Survey–Cascades Volcano Observatory, told ABC News. “But a bit out of the ordinary are several small magnitude earthquake swarms in March to May 2016, November 2016 and April 16 to May 5, 2017. During the April 16 to May 5, 2017, swarm, we detected well over 100 earthquakes, all below a magnitude 1.3.”

Personally, I am much more concerned about Mount Rainier than I am about Mount St. Helens.  Since the last time it erupted in the late 19th century, hundreds of thousands of people have moved into the danger zone around the volcano, and a full-blown eruption now would eclipse any other natural disaster in recorded U.S. history.

Over the last 30 days, there has also been a good bit of seismic activity at Mount Rainier, and much of it has been centered right along the core of the volcano… 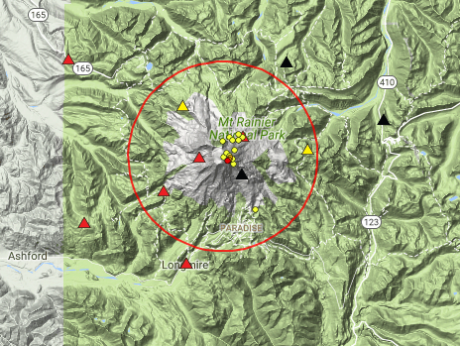 Mount Rainier is capable of unleashing a flow of super-heated mud that could literally cover much of the Seattle/Tacoma area.  If you think that I am exaggerating, please see the following excerpt from Wikipedia…

Mount Rainier is currently listed as a Decade Volcano, or one of the 16 volcanoes with the greatest likelihood of causing great loss of life and property if eruptive activity resumes.[45] If Mt. Rainier were to erupt as powerfully as Mount St. Helens did in its May 18, 1980 eruption, the effect would be cumulatively greater, because of the far more massive amounts of glacial ice locked on the volcano compared to Mount St. Helens,[37] the vastly more heavily populated areas surrounding Rainier, and the simple fact that Mt Rainier is a much bigger volcano, almost twice the size of St. Helens.[46] Lahars from Rainier pose the most risk to life and property,[47] as many communities lie atop older lahar deposits. According to the United States Geological Survey (USGS), about 150,000 people live on top of old lahar deposits of Rainier.[7] Not only is there much ice atop the volcano, the volcano is also slowly being weakened by hydrothermal activity. According to Geoff Clayton, a geologist with a Washington State Geology firm, RH2 Engineering, a repeat of the Osceola mudflow would destroy Enumclaw, Orting, Kent, Auburn, Puyallup, Sumner and all of Renton.[36] Such a mudflow might also reach down the Duwamish estuary and destroy parts of downtown Seattle, and cause tsunamis in Puget Sound and Lake Washington.[48] Rainier is also capable of producing pyroclastic flows and expelling lava.[48]

I keep warning about the dangers of a future eruption of Mount Rainier, and this is something that is so heavy on my heart that I even included an eruption of the volcano in my novel entitled The Beginning Of The End.  If you live in the Seattle/Tacoma area, you need to have a plan for a very rapid evacuation in the event a major eruption suddenly takes place.

On the other side of the world, scientists are warning that a supervolcano near Naples, Italy is reaching a critical stage.  The following comes from Newsweek…

One of the world’s most dangerous supervolcanoes appears to be closer to erupting than we once thought, scientists have warned. Campi Flegrei in southern Italy has been showing signs of reawakening over the past 67 years, and new research indicates the volcano has been building energy throughout this period, increasing the risk that it will erupt.

Campi Flegrei is a huge volcanic field that sits about 9 miles to the west of Naples, a city home to over a million people. It is made up of 24 craters and edifices, and appears as a large depression on the surface of the land.

The volcano last erupted in 1538 after almost a century of pressure building up. But though it lasted over a week, this was a comparably small one—40,000 years ago, it produced a “super-colossal” eruption. This is the second highest measure on the volcanic explosivity index, the first being “mega-colossal,” like those seen at the Yellowstone supervolcano in the U.S. thousands of years ago.

For years I have been documenting how the crust of our planet is becoming increasingly unstable, and at some point a major seismic event is going to dramatically change life in America overnight.

Let us hope that day is delayed for as long as possible, but as certainly as you are reading this article it is coming.

The New Guy In The White House Won’t Bring Any More Justice Than The Previous One
January 25th, 2021 Sons of Liberty Media

Biden’s Buttigieg Wants to Put Tax On Number Of Miles You Drive
January 25th, 2021 The Lid

As far as Biden is concerned, WHO doesn’t have any problems
January 25th, 2021 Liberty Unyielding