U.S. NEWS 12 Signs That America Has Become A Politically-Correct Madhouse

12 Signs That America Has Become A Politically-Correct Madhouse

What in the world has happened to the United States?  We are rapidly getting to the point where political correctness is in danger of becoming our national religion.  Of course most people would not even call it a “religion”, but for most Americans this unwritten set of rules shapes everything that they think, do and say.  Many had been hoping that the spell of political correctness would be broken by the election of Donald Trump, but that obviously has not happened.  The forces of political correctness still have a stranglehold on our education system, on all forms of entertainment, on our legal system, and on most of the politicians in both political parties.

The unwritten rules of political correctness are shifting and changing all the time, and if you don’t keep up with them the penalties can be extremely severe.

In fact, there have been numerous people over the past year that have been publicly crucified in the court of public opinion for doing or saying something that was not politically-correct.

And with each passing day, the forces of political correctness take a little bit more ground.  The following are 12 signs that America has become a politically-correct madhouse…

#1 According to Time Magazine, a book entitled “Santa’s Husband” will be released on October 10th by a major U.S. publisher that depicts Santa as “a gay man in an interracial relationship”.

Outrage has grown at Walter Reed Middle School in North Hollywood, as the school faces layoffs and increased class sizes due to a law limiting funds for schools with a higher white student body.

The Los Angeles Unified School District provides more funding for schools where the white population is below 30 percent.

In a letter to parents, the district noted the highly regarded middle school had been above the percentage for the past couple years.

#3 According to Michael Moore, historians will mark “March 28, 2017, as the day the extinction of human life on earth began” because Donald Trump has rolled back Obama’s climate change regulations.

#4 One of my readers just sent me a photo that his 16-year-old son took at school.  It is a photo of a slide that was being projected on to a large screen at the front of his classroom that contained this message: “Polls show that young people today are more accepting of lesbian, gay, bisexual and transgender people than ever before.  Why do you think that is?” 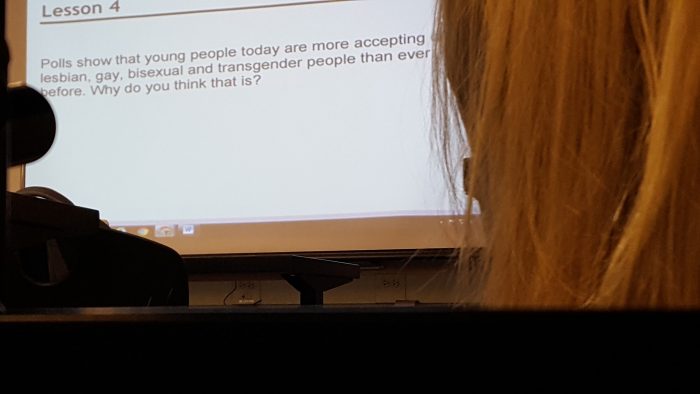 #5 An elementary school in California has banned the game of “tag” because it is too dangerous.

#6 At one high school in Iowa, students were recently denounced as “racists” for dressing up in red, white and blue for a basketball game.

#7 In North Carolina, as early as the first grade a “gender unicorn” is being used to teach children “about sexual orientation and gender identity“…

#8 According to Dr. Michael Brown, bathroom scales have been taken out of the gym at one college campus for a very strange reason: “Administrators at Carleton University have removed the bathroom scales from the campus gym, claiming that ‘being fixated on weight’ does not ‘have any positive affect [sic] on your health.’”

#9 A Christian university in Minnesota has told professors “to stop using terms such as ‘man’ and ‘mankind’ because they are too masculine“.

#10 Snickers bars will soon be sold in rainbow wrappers “as part of a pro-LGBT ad campaign“.

#11 A 32-year-old man will now compete in international volleyball events as a transgender woman, and may end up qualifying for the Olympics as a female athlete…

The now 32-year old says volleyball has been the constant in a life full of changes. In January, she was just approved by USA Volleyball to compete as a woman. Before that, she was required to play in the men’s division at all USAV sanctioned events.

USAV requires transgender women to undergo hormone replacement therapy consistently for at least one year — with proper documentation — and they also have to change their identification, like passports and birth certificates, to female. Before, some organizations, including the Olympics, would require trans athletes to have sex reassignment surgery.

#12 Planned Parenthood has killed millions of children, but nobody from that organization ever seems to get into trouble with the law.  Instead, two activists that exposed the fact that Planned Parenthood is auctioning off baby parts to the highest bidder have been charged with 15 felonies in the state of California.

In this type of environment, people like me are becoming dinosaurs.  If you follow my work on a regular basis, you know that I am not afraid to do or say things that might offend some people.

Of course I am not actually trying to offend anyone, but I won’t let the forces of political correctness dictate what I can or cannot say about a particular topic.

Ultimately, political correctness is a tool that progressives use to silence the opposition.

They want to make it a crime to think or say anything that they might find offensive, and to a substantial degree it is working.

Our founders intended for us to permanently have a right to free speech, but now we have moved into a time when saying the wrong thing can get you brutally persecuted.

I would like to be optimistic that we can start to roll back the forces of political correctness, but as I noted at the beginning of this article, they have control of our schools, our courts, our entertainment and most of our political leaders.

But of course we can never give up the fight, because if they win life in America will ultimately become a complete and total nightmare.