U.N. and Obama Well on Their Way to Removing All Guns in America

Trapped within the fanfare Chinese Black Monday and the American stock market plunging almost 600 points yesterday, suspicious explosions in China and on an American military base, there has been a very important, but quiet development ,which is escaping the attention of both the American people and the Independent Media.

The Corker Bill Spells the End of the Second Amendment

We are safe from the ravages of the UN Small Arms Treaty, aren’t we? In fact, many Senators have openly stated that they refuse to ratify this controversial treaty. Well, that is not exactly true. There is a new process established by the new Corker bill may very well have changed the way treaties are passed from here on out.

Under our Constitution, a full two thirds vote from senators for ratification to approve any kind of a treaty. This provision of the Constitution is very clear on this point and it is designed to prevent a treasonous subversion of the Constitution. However when one is living under a criminal enterprise, such as the one presented by the present criminal enterprise in power, who worries about following the rules? As a case in point, under the Corker bill, in order to have stopped the Iran nuclear deal, a two thirds vote to stop it from being implemented by the White House. This is not what the Constitution says and this out and out treason against the people of the United States as the Corker bill is a back door to taking our guns while nullifying the second Amendment.

Under the Corker bill, the following paragraphs describe what we are in for.

The Plot to Disarm America Is Commencing

The evidence is mounting that Obama and his colleagues at the United Nations are preparing for complete gun confiscation of civilian owned American guns. There is a new document, previously held secret, which has surfaced and clearly signals the intention of the United Nations to engage in gun confiscation in the relatively near future. The document is damning, however, the existence of the document is not even needed to prove the point that there is a major confrontation brewing between the American people and an international peace-keeping UN force, and it’s coming right around the corner.

Another Nail In America’s Coffin

The following is a smoking gun document that presents seven sequential steps designed to culminate in the total disarmament of the American nation. For those of you that know your history, you will note that there were 17 genocides in the 20th Century and in each case, these genocides were preceded by gun confiscation by the host government. According to the Democide Project located at the University of Hawaii, governments killed far more people, an estimated 26o million victims, than even war. History shows that if we ever allow government, the UN, or the U.S., to ever be able to seize our guns, we are signing our death warrant!

The following document is a declaration of war against the United States people. For those who find the document to be on the blurry side, scroll down to the Appendix to view a clearer copy. 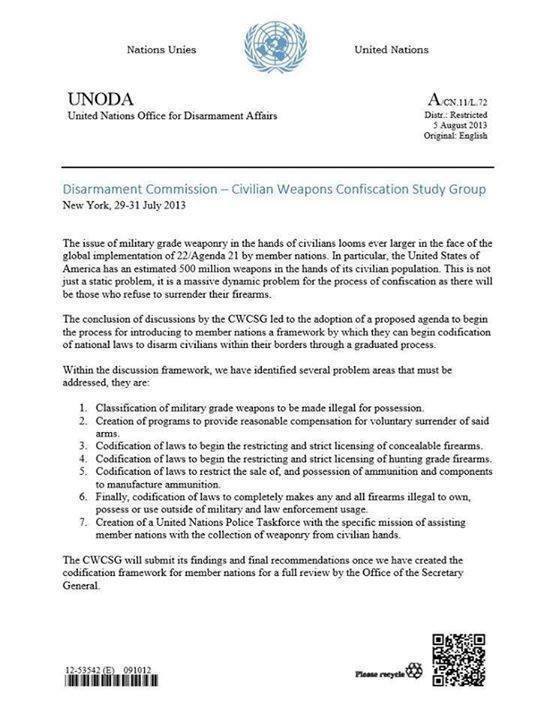 If one examines the first five steps of the plot, it is easy to ascertain the pattern of gun confiscation that Obama has attempted to follow. I do not believe that Obama has to completely implement steps 1-5 before moving to enforce steps 6 and 7. Therefore, even though Obama has not completely implemented the first five steps across the country, he has done enough to usher in Steps 6 and 7 in this United Nations disarmament plan. Steps 6 and 7 are listed below:

“6. Finally, codification of laws to completely makes any and all firearms illegal to own, possess or use outside of military and law enforcement usage.
7. Creation of a United Nations Police Taskforce with the specific mission of assisting member nations with the collection of weaponry from civilian hands”.

The proof for the validity of the intentions signaled by this document does not lie in the authenticity of any single document. The smoking gun evidence that Obama is progressively moving towards seizing all 300,000,000 civilian guns in this country, lies in the ubiquitous manner in which Obama has pursued sequential and progressive steps toward the disarming of the American people. As it has been said, “Judge a man by what he does, not by what he says”. The cases in point would be what Obama has tried to accomplish after the Boston Marathon Bombing, the Batman Aurora, CO. shootings and the Sandy Hook event. With some very sloppy bootstrapping steps following these events, Obama has progressively attempted to make guns more difficult to obtain and he has greatly expanded what is defined as “military grade weapons” and to limit what is considered to be “appropriate” for hunting as he has tried to block Americans from obtaining as many of these weapons as possible.

“1. Classification of military grade weapons to be made illegal for possession”.

“4. Codification of laws to begin the restricting and strict licensing of hunting grade firearms.”

I am certain that most people familiar with present Second Amendment debates will recognize the various and omnipresent “gun buy-back” programs funded with your tax money designed to remove guns from civilian hands.

“2. Creation of programs to provide reasonable compensation for voluntary surrender of said arms”.

How many times have we witnessed Obama standing before the cameras and national press corps and threaten to take unilateral action against our gun rights following each one of the false flag events mentioned above? In each instance, Obama has used thinly veiled excuses that he only wants to take away guns that “military grade weapons”.

“1. Classification of military grade weapons to be made illegal for possession.

5. Codification of laws to restrict the sale of, and possession of ammunition and components to manufacture ammunition”.

Connecting the Dots for Gun Confiscation

Even if the the UN document designed to disarm America, listed above, was not genuine (and it is), the following, very public document has been proven to be very authentic.

Under the heading, “Hiding in plain sight”, the United Nations has been advertising for the following position for over a year: 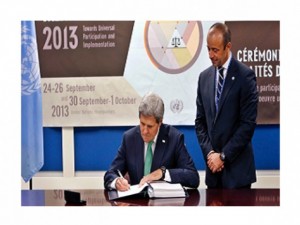 Thanks to Congress, Obama has found a backdoor way around the Second Amendment by subverting our treaty process. The stealth in which this is occurring is mind-boggling. I hope that many of the readers will share this information with friends and neighbors. Americans cannot comply with the treason that will arise out of this act.

Papa John's Executive Gifts 15-Year Employee New Car After Thieves Cause Old One to Be Set on Fire
June 17th, 2021 Flag And Cross