God,
Have mercy on America. Draw us back to YOU. Our country has fallen into such sin and many of our leaders are not believers. I ask that You send a revival to our land.

I pray that YOUR people would humble themselves and pray… for our nation, world leaders, issues regarding gay marriage and abortion, the economy, the future President of the US, and the sin areas in our own lives that need to be rooted out. You are all powerful and the word IMPOSSIBLE in not in Your vocabulary. Heal our land. We thank You for the salvation given to us through Christ Jesus. Just as Ninevah turned from their wicked way…. Let America do the same.

“Now the word of the Lord came to Jonah the second time, saying, “Arise, go to Nineveh, that great city, and preach to it the message that I tell you.” So Jonah arose and went to Nineveh, according to the word of the Lord. Now Nineveh was an exceedingly great city, a three-day journey in extent. And Jonah began to enter the city on the first day’s walk. Then he cried out and said, “Yet forty days, and Nineveh shall be overthrown!”

The People of Nineveh Believe
So the people of Nineveh believed God, proclaimed a fast, and put on sackcloth, from the greatest to the least of them. Then word came to the king of Nineveh; and he arose from his throne and laid aside his robe, covered himself with sackcloth and sat in ashes. And he caused it to be proclaimed and published throughout Nineveh by the decree of the king and his nobles, saying,

Let neither man nor beast, herd nor flock, taste anything; do not let them eat, or drink water. But let man and beast be covered with sackcloth, and cry mightily to God; yes, let every one turn from his evil way and from the violence that is in his hands. Who can tell if God will turn and relent, and turn away from His fierce anger, so that we may not perish?

Then God saw their works, that they turned from their evil way; and God relented from the disaster that He had said He would bring upon them, and He did not do it. 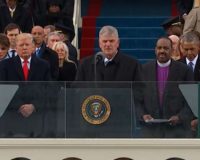 FRANKLIN GRAHAM: So Maybe Trump Lost Wealth While In Office… But The Reason Is EPIC
April 12th, 2021 Clash Daily

By Greg Laurie "For consider Him who endured such hostility from sinners against Himself, lest you become weary and discouraged in your souls." —Hebrews 12:13 In the...
Read more
BIBLE STUDY / DEVOTIONALS

Actions speak louder than words...   By Lyle Rapacki (TCP News)  A member of the church, who previously had been attending services regularly, stopped going.  After a...
Read more
BIBLE STUDY / DEVOTIONALS

Aligned with God’s Will

By Greg Laurie "If you abide in Me, and My words abide in you, you will ask what you desire, and it shall be done...
Read more