While there is no deal in regards to the nuclear development of Iran, there are more snippets flowing out of Iran that raises serious, serious concerns about any acceptance of Iran’s position to continue its’ march to nuclear power status.  Mentioned here is another concern coming to light, as well as my original report under date of April 8th.  The stakes could barely be higher for the security and safety of the Middle East, as well as for the United States.

Iran will begin using its latest generation IR-8 centrifuges as soon as its nuclear deal with the world powers goes into effect, Iran’s foreign minister and nuclear chief told members of parliament on Tuesday, according to Iran’s semi-official FARS news agency.

If accurate, the report appears to make a mockery of the world powers’ much-hailed framework agreement with Iran, since such a move clearly breaches the US-published terms of the deal, and would dramatically accelerate Iran’s potential progress to the bomb.

Iran has said that its IR-8 centrifuges enrich uranium 20 times faster than the IR-1 centrifuges it currently uses.

According to the FARS report, “Iran’s foreign minister and nuclear chief both told a closed-door session of the parliament on Tuesday that the country would inject UF6 gas into the latest generation of its centrifuge machines as soon as a final nuclear deal goes into effect by Tehran and the six world powers.”

It said that Foreign Minister Mohammad Javad Zarif and Atomic Energy Organization of Iran (AEOI) head Ali Akbar Salehi made the promise when they briefed legislators on the framework agreement, and claimed the move was permitted under the terms of the deal.

“The AEOI chief and the foreign minister presented hopeful remarks about nuclear technology R&D which, they said, have been agreed upon during the talks (with the six world powers), and informed that gas will be injected into IR8 (centrifuge machines) with the start of the (implementation of the) agreement,” FARS quoted Javad Karimi Qoddousi, a member of the parliament’s National Security and Foreign Policy Commission, as saying.

Qoddousi said the Iranian Foreign Ministry plans to release a fact sheet presenting Iran’s version of the framework understandings in the next few days. “Those issues that have stirred serious concern among the Iranians will be revised and released in this fact sheet,” he said.

Earlier Tuesday, Israel Radio reported that Zarif told the lawmakers that Iran was capable of producing an atomic bomb at any given moment, but will refrain from doing so due to religious Islamic injunctions against such a move. 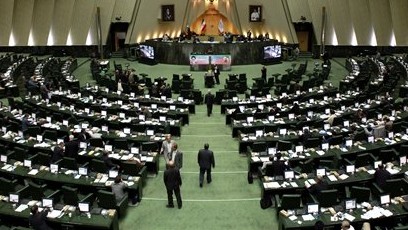 Major differences have emerged between the P5+1 powers and Iran over what was agreed in the framework deal.

“Parameters” detailed by the US leave no doubt whatsoever, however, that the use of anything other than the most basic, first generation IR-1 centrifuges is barred for 10 years, and that even R&D on advanced centrifuges will be severely constrained.

“Iran will only enrich uranium at the Natanz facility, with only 5,060 IR-1 first-generation centrifuges for ten years,” the US parameters state. “Iran has agreed to only enrich uranium using its first generation (IR-1 models) centrifuges at Natanz for ten years, removing its more advanced centrifuges… Iran will not use its IR-2, IR-4, IR-5, IR-6, or IR-8 models to produce enriched uranium for at least ten years,” the US document adds. “For ten years, enrichment and enrichment research and development will be limited to ensure a breakout timeline of at least 1 year. Beyond 10 years, Iran will abide by its enrichment and enrichment R&D plan submitted to the IAEA, and pursuant to the JCPOA, under the Additional Protocol resulting in certain limitations on enrichment capacity.”

A document issued by the Iranian Foreign Ministry on Friday also does not assert an Iranian right to use IR-8 centrifuges. Its only reference to the IR-8 is as follows: “According to the reached solutions, Iran will continue its research and development on advanced machines and will continue the initiation and completion phases of the research and development process of IR-4, IR-5, IR-6, and IR-8 centrifuges during the 10-year period of the Comprehensive Plan for Joint Action.”

SOURCE: The Times of Israel