Obama on Religion – Confusion and Sentimentalism

“Radical Islamists have no limits when it comes to destruction and the taking of human life. They are motivated by a religious doctrine which requires them to convert or destroy all who are opposed to their religious views. In essence, they are pursuing a master religion for the world as the Nazi’s tried to pursue a master race.” – Sen. Lindsey Graham SC

Barack Obama’s refusal to call Muslim atrocities acts of Islamic terrorism or, even Islamic extremism, took a new twist the morning after the horrific murder of Moath al-Kasasbeh a Jordanian pilot who was burned to death in a metal cage by ISIS.

In a befuddled rant of ridiculous rhetoric Obama twice employed the word “organization” to describe the Islamic terror group ISIS that had just burned the Jordanian pilot alive. Looking calm and almost disinterested he uttered the word twice in a video that was brief, but not very assuring.

We can only wonder if Mr. Obama was equating ISIS with community organizations he had ties to like ACORN, or some humanitarian organization such as, Feed the Children.

Why does the rest of the world not mince words when it comes to Islamic atrocities and Mr. Obama does a dispassionate soft waltz across the issue with words that fade and die before they are completely out of his mouth? Obama’s approach to serious international problems is proof that when timid is combined with tepid it always produces what is insipid.

If Obama cannot comprehend the political and social ramifications of these clearly horrific Islamic crimes against humanity, how can we respect anything he says about religion – Islamic or Christian. In fact, the error was apparent the first time he addressed religion, but few were taking note.

NY Times reported in 2007 that Barack Obama was mesmerized by the Islamic call to prayer saying, Mr. Obama described the call to prayer as “one of the prettiest sounds on Earth at sunset.”

And yet, he continues to insist that he is a Christian and not a Muslim. But after listening to the call to prayer he then had to settle down to the next day’s classes in his Indonesian Madrassas school where the tenets of Islam would be ground into his head.

We know he became familiar with the Quran thus he would know of the dozens of verses that call for the death of any and all that refuse to convert to, or adopt, the Muslim religion. If he was taught the Quran, then why doesn’t he know, it is those verses that drive every Muslim who is willing to act on them? Is he willing to dismiss the crimes that begin in the book for a quaint memory of the haunting call to Islamic prayer?

The only question remaining is; why can’t Mr. Obama identify the source and the nature of radical Islam and all those who practice it, he is abundantly qualified to do so more than anyone else – if he were honest.

Mr. Obama’s responses to Muslim atrocities and his Muslim training are juxtaposed against each other in such a way as to remove any doubt about just why so many think he has sold America out for – a song and a dance.

After the campaign insult to two thirds of Americans who profess to be Christians about being people who cling to their guns and their Bibles, we might have gotten a hint. But the balloters would not be moved to caution much less to stop him. Two terms later the insults continue.

Untold millions of people have trusted the Holy Spirit inspired writings of the revered Apostle Paul and subsequently guided their lives through turbulent times by his doctrines and admonishments. Along comes Barack and with one sweeping statement, he has relegated Paul’s words to ‘obscurity’ in a pompous assertion that, after all, the gay life is really not a sickening abomination to God.

This is only the first whopping anti-Christian assumption the President would make. The second came shortly after he was elected. In full support of abortion at any time during pregnancy and any source to pay for it, Obama proved his willingness to continue the American genocide by ‘vowing’ to support abortion on the eve of the anniversary of the Roe v. Wade ruling.

The doctrine and the general theme of the Bible say, both killing the innocent and homosexuality are an abomination to God. It is a perfect non-sequitur to think that someone who believes in and practices these things can be a Christian. It is self-delusional to call yourself a Christian while practicing or publicly supporting such abominable sin.

The warning against harming the “little ones” naturally qualifies the unborn that are after all – the littlest of all!

Mr. Obama’s views on abortion may have been snatched out of the clear blue sky of liberal gibberish, but the result of his beliefs will lead to the depths of the deep blue sea. To wit:

“But whoso shall offend one of these little ones which believe in me, it were better for him that a millstone were hanged about his neck, and that he were drowned in the depth of the sea.” (Mt 18: 6)

If I wanted to know something about what is going on in my state I would contact David Vitter or perhaps Bill Cassidy, but I would not ask the Baptist minister who has a church down the street. Why should we trust the religious views of any politician especially if they are theologically complex?

In fact, as long as I own a bible I would not ask preacher or politician theological questions. Here is the rub, Muslims do exactly the same. They refer to their book for the bottom line answers to questions about their religion.

If it is their source then it is the book that creates radicals not just being born in a Muslim country. It is not an adopted ideology like communism or Nazi-ism. Let’s do the simple math.

When a Christian become serious about the Bible, when they decide to get radical or extremist they will join a church, preach to strangers, give to the poor, become a missionary or give their lives to save another. That is what the bible teaches.

When a Muslim decides to get serious about their book there is only one result – death to others. If others won’t become Islamists they must die. That is what the Quran teaches.

This writer has several degrees in arts and theology, but I don’t need one speck of my education to do this math – neither do you.

We cannot depend on the president’s views of religion, Christian or Muslim and sadly, we can’t depend on his protection from those in our world who for some reason cannot, or will not, do this math.

The answers that Barack cannot give Americans – can only come from God. 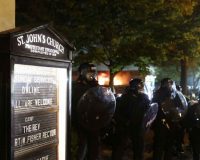