Secretary of State John Kerry: It’s a Mistake To Link Islam with Islam

Rewarding Islamic violence and savagery with submission is not a strategy for victory. It is surrender. And that is exactly what the Obama administration is doing.

If Obama really believes that al Qaeda, the Islamic State, Boko Haram et al have nothing to do with Islam, why did he give Osama Bin Laden a proper Islamic burial? Our soldiers prepared Bin Laden’s body according to Islamic law — washed him, prayed over him, etc. 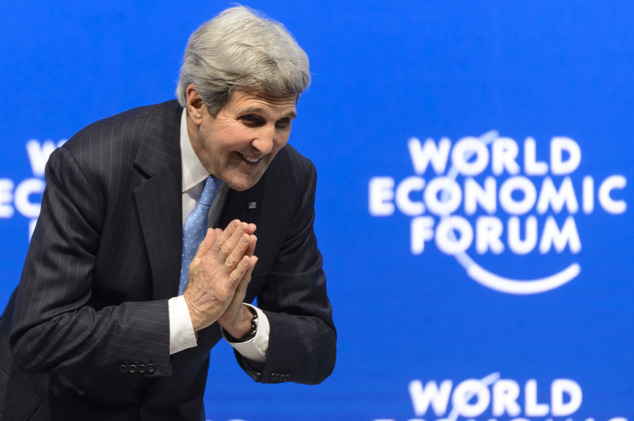 Kerry tells Western leaders it would be an ‘error’ to refer to violent extremists as Islamists: ‘We may very well fuel the very fires that we want to put out’ U.S. Secretary of State was speaking to an audience of opinion leaders at the World Economic Forum

By Francesca Chambers For Dailymail.com and Associated Press, January 23, 2015

Violent extremists killing children and others in Iraq, Syria, Nigeria and other parts of the world may cite Islam as a justification, but the West should be careful about calling them Islamic radicals, Secretary of State John Kerry told an audience of opinion leaders Friday at the World Economic Forum.

In a speech calling for a global effort against violent extremism, Kerry said it would be a mistake to link Islam to criminal conduct rooted in alienation, poverty, thrill-seeking and other factors.

‘We have to keep our heads,’ Kerry said, according to the Associate Press.

‘The biggest error we could make would be to blame Muslims for crimes…that their faith utterly rejects,’ he added. 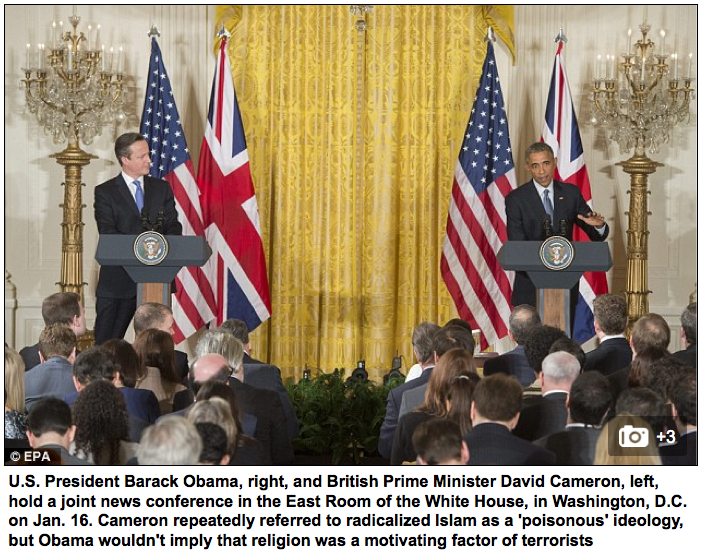 ‘We will certainly not defeat our foes by vilifying potential partners,’ the top U.S. diplomat said. ‘We may very well fuel the very fires that we want to put out.’

Kerry’s comments highlighted a division between the U.S. and its closest allies, including French President Francois Hollande, whom Kerry memorably pressured into an awkward hug last week as a show of solidarity with the people of Paris after terrorists attacked Charlie Hebdo’s headquarters.

Hollande told the same audience earlier Friday that Islamic extremism is a problem that must be opposed.

On Thursday, British Foreign Secretary Philip Hammond stood next to Kerry and urged the defeat of what he called ‘the scourge of violent Islamist extremism.’

The Obama administration has come under criticism for its unwillingness to differentiate between Islamic extremism and other forms of extremist violence.

Earlier this week, Rep. Tulsi Gabbard, a Democrat from Hawaii and Iraq war veteran, said it was a ‘bipartisan concern’ that Obama and his top aides don’t use the term ‘Islamic extremism.’

Standing just a few feet away, Cameron warned of a global ‘Islamist extremist terrorist threat,’ condemning the perversion of Islam in the strongest possible terms three times and using the word ‘poisonous’ to describe the radicalized ideology five times.

Obama would not refer to the religion of ISIS militants during the White House news conference but at one point called them ‘fanatics.’

The U.S. president said the world must ‘lift up those voices that represent the vast majority of the Muslim world’ and push a counter narrative as ‘aggressively and as nimbly as the messages coming’ from the radicals.

Obama also suggested that the U.S. had an ‘advantage’ over countries like Britain when it comes to fighting terrorism because ‘our Muslim populations, they feel themselves to be Americans.’

‘There is this incredible process of immigration and assimilation that is part of our tradition. That is probably our greatest strength,’ he said.

Earlier in the week Obama’s spokesman said that the world should just call the radicals fighting with ISIS what they are: terrorists.

‘These terrorists are individuals who would like to cloak themselves in the veil of a particular religion,’ White House press Secretary Josh Earnest said. ‘But based on the fact that the religious leaders of that religion have roundly condemned their actions, those religious leaders have indicated that their actions are entirely inconsistent with Islam.’

Earnest said the fact that the ‘majority of victims of terror attacks’ are Muslim ‘is a pretty clear indication that this is not a matter of the world being at war with Islam.’

‘The world and the United States…is at war with these individuals, these violent extremists who carry out these acts of terror and try to justify it by invoking this religion.’ he stated.

He later said ISIS members were trying to ‘invoke their own distorted deviant view of Islam to try to justify’ their actions.

‘And I think that is completely illegitimate. And what we should do is we should call it what it is. And it’s an act of terror, and it’s one that we roundly condemn.’

The Reason “Russian Bounty On US Troops” Story Was Released, And The Reason It Was Corrected
April 16th, 2021 The Lid