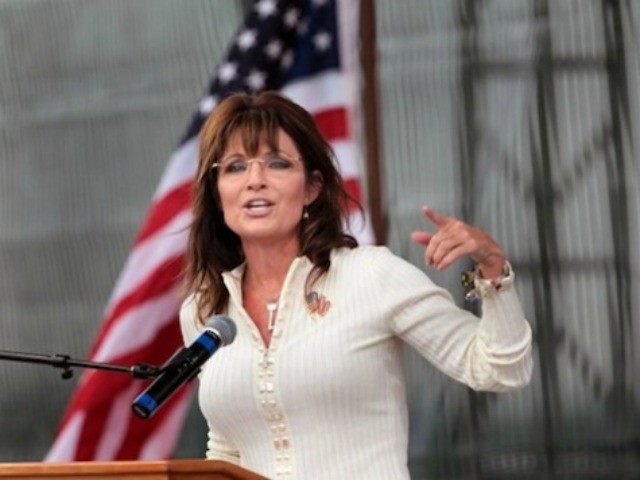 After declaring over the weekend that she was “seriously” considering a potential 2016 White House run, former Alaska Governor Sarah Palin said she was ready to take on Hillary Clinton.

Speaking at Saturday’s Iowa Freedom Summit, Palin said it would take a bold conservative and a “village” to defeat Clinton should Democrats nominate her. Palin quipped that she wasn’t sure whether Clinton was a “new Democrat” or an “old one.”

She held up a a “Ready for Hillary” bumper sticker and declared, “I’m ready for Hillary.” She said there should not be a “no girls allowed” sign on the Oval Office door.

“America is ready to get stuff done,” Palin then said, saying that the key to victory in 2016 will be to nominate a candidate who proposes “real solutions grounded in time-tested truths” with a “record” of past achievements.

During her speech, she recalled some of her most memorable and electric moments in Iowa over the years. She reminisced about the Indianola rally in 2011 which she delivered a landmark speech for the ages. In that speech, Palin blistered the crony capitalism on both sides of the aisle, and the issue only started to gain traction after Palin’s speech in the heart of the 2012 election cycle. Candidates were less afraid to publicly take on crony capitalism after Palin’s thunderous Indianola speech.

She recalled meeting the late Chris Kyle for the first time in Pella in 2011 when he was on security detail for the premiere of Stephen K. Bannon’s “Undefeated” movie about Palin’s record as a reformer who took on both political establishments to get results for voters. She said “screw” Hollywood and liberals who neither understand nor appreciate veterans like Kyle. Palin said that “America needs a hero again and Chris Kyle has been that man.”

Palin said she has “every confidence” that “we will have a rebirth of successful leadership like Reagan gave us” if conservatives nominate a bold conservative instead of an establishment pale pastels candidate.

Even if Palin does not run, her endorsement may be decisive in states like Iowa and South Carolina in what is shaping up to be a very crowded and fluid 2016 field.

As Breitbart News has reported, though Palin did not run in 2012, she was the most well-received politician in Iowa and her influence was clearly felt in the early primary states:

One of the reasons Palin has been called the prototypical “Teavaneglical” politician is because she fervently appeals to faith-based voters as much as she does to fiscally conservative voters. Her influence was proven during the 2012 cycle when she praised Rick Santorum in December in 2011 when Iowans seemed lukewarm about the field of Republican primary candidates. After Palin made her remarks on December 2 on Fox News’s Hannity, Santorum, who was at four percent in the polls in Iowa–barely above Jon Huntsman, who was not even competing in the state–started getting momentum and eventually won the caucus a month later. Though Santorum had gone “all-in” in Iowa and planted his campaign exclusively in the state, voters were persuaded to consider his candidacy more seriously after Palin spoke kindly of him.

Palin has influence in South Carolina as well, of course–her support of Nikki Haley in the 2010 primary ensured she won the Palmetto State’s gubernatorial election–and her positive comments about Newt Gingrich enabled him to win South Carolina’s presidential primary in 2012.

Former CBS Healthwatch Reporter Was Right & WHO Just Confirmed How They Will Make The Vaccine Appear “Effective”
January 22nd, 2021 Sons of Liberty Media

Previous articleFranklin Graham: Christianity In US Being Pushed To Back Of The Room While Other Religions Getting Front Row
Next articleFirst Century Gospel Of Mark Manuscript Found In Mummy Mask
Share
Facebook
Twitter
Pinterest