New Israeli research supported by testimonies, photos and experts’ analysis suggests that the organization use chemical weapon against the Kurds in Kobani, Syria

While the world is following anxiously after the rapid advancement of the Islamic State group, new Israeli research claims that Islamic State may have succeeded in obtaining chemical weapons.

According to the study, it appears that the usage of chemical munitions began as early as July during the start of the organization’s fight with Kurdish forces near the town of Kobani, Syria. Moreover, at least three Kurdish fighers were killed as a result of the chemical attack, the report said.

These findings were part of a report published earlier this week by The Global Research in International Affairs (GLORIA) Center operating in the IDC (Interdisciplinary Center) Herzliya. 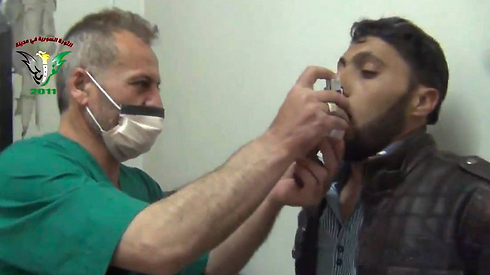 The report drew gained public attention in recent days in major media outlets in the United States. Its author, Dr. Jonathan Spyer, used evidence and photos provided by Kurds from Kobani to prove his claim.

An expert who examined the photos of the deceased Kurds discovered that they died as a result of toxic gas attack, most likely sulfur

mustard. “At least in one incident, the Islamic State used chemical weapons against the Syrian Kurds in Kobani,” the report said.

The United States and its allies have dramatically stepped up air strikes in the past two days near the Syrian town of Kobani, where Kurdish defenders said they had given the Americans target coordinates to try to halt an Islamic State assault.

The US-led military coalition said it had bombed Islamic State targets in and around Kobani nearly 40 times in the space of 48 hours, around triple the pace of last week.

A four-week siege of the mainly Kurdish town on the border with Turkey has become a focus of the U.S.-led effort to halt the militants, who have seized swathes of territory in Syria and Iraq. The United Nations has warned of a massacre if the town falls to the militants, who now control nearly half of it.

The coalition has been bombing Islamic State targets in Iraq since August and extended the campaign to Syria in September. After weeks in which Kobani was rarely targeted, the town has become the main focus of strikes.

In the two 24-hour periods since Monday, the US military reported 21 and 18 strikes on militant targets in or near the town, which is called Ayn al-Arab in Arabic. Last week it typically struck the area just six or seven times per day.

Reuters contributed to this report

The current officer who killed Babbitt is being protected. The former officer who mistakenly killed Wright is being prosecuted   By Jeff Crouere (TCP News)  On January...
Read more
BIBLICAL ANSWERS