The evil that is filling this earth in these ending times defies understanding! Laughing at scared little children as they are being threatened with beheading will be met with God’s judgment!

Even the equally demented mother seems to be amused at the sight. “Do not laugh too much,” says the “prophet” of Islam, “for laughing deadens the heart” (al-Tirmidhi, 2305; Ibn Maajah, 4193). Maybe this twisted “man” wanted to strengthen the children’s heart by nearly scaring them to death. After all, what doesn’t kill them should make them stronger, right? If these little children didn’t have enough nightmares already as it is in having to flee Mohammed’s marauding murderers in Syria, they’ll be sure to have a few more now … 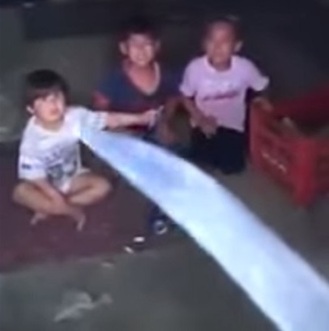 By Naharnet – “A man who staged a sick prank by filming himself threatening to behead three Syrian refugee children has confessed that he was amused by their weeping and their mother actually loved the video, a police statement said on Saturday.

Meanwhile, a security official told Agence France-Presse that the video proved to be a ‘sick joke,’ and that the children had been left in the man’s care by their mother, his neighbor, while she went to buy groceries.

According to an Internal Security Forces communique, the now-detained 30-year-old man told interrogators that he gathered the kids in a room near the bakery he owns and threatened them ‘after he saw them trying to go down from their home’s balcony on a public phone pole.’

He said he wanted to scare them so that they don’t repeat the attempt.

‘He started filming because he liked the scene of the crying children, and that happened in the presence of Lebanese 14-year-old minor M. T.,’ the ISF said in its communique.

In a surprising twist, the kids’ mother arrived during the last moments of filming and she actually ‘loved the scene’ and asked that the video be sent to her phone.

The knife man, M. F., was referred to the relevant judicial authorities while the minor M. T. was released after his father signed a pledge.

The mom was also freed after she pledged to take good care of her children, the ISF said.

The man had been arrested Friday by ISF Intelligence Bureau agents in the southern town of Ebba in the Nabatiyeh province.

The video, which was posted on YouTube Friday and shared widely, shows the three terrified children crying as a man standing behind a camera waves a knife and asks: ‘Whom do we behead first?’

‘Put your hand here or else I will sever your head,’ he tells one of the terrified boys, who cry their lungs out throughout the video.

‘You, come here … Do you belong to Daesh?’ the man says, using an acronym for the full Arabic name of the extremist Islamic State group, which has recently beheaded two Lebanese soldiers.

Adding to the pathos of the incident, the crying children respond by pointing at each other.

While describing the incident as “an isolated incident,” the security official said the video was yet another sign of the effect of the Syrian war on Lebanese society.

Lebanon hosts more than 1.1 million Syrian refugees, and fighting related to the conflict frequently breaks out in the tiny country.

Last month, jihadists took a number of Lebanese soldiers and police hostage after battles with them. They subsequently beheaded two of the soldiers, and widely distributed images of their corpses.

“We call on everyone to make sure we maintain our awareness, but of course this video shows the depth of the impact of the Syrian crisis,” said the police official.

“People are affected by seeing images of beheadings, and some people will start to imitate them. Poor children; they were terrified,” he added.