Pakistan Teeters On The Edge

(Voice of the Persecuted) While the world news outlets focus on only one portion of the middle east crises at a time, and portray the current crises as individual separate from the other outbreaks, there are similarities possibly linking it together as one.  (More)

Christians in Pakistan are reporting that the IS (notorious terror group now demonizing northern Iraq)manifesto is being distributed in Pakistan and Afghanistan:

(Excerpt) The IS manifesto entitled “Victory” has been apparently distributed to increase support for IS Caliphate. This manifesto was distributed in Afghanistan also. The booklet urges general public to support the Islamic caliphate. 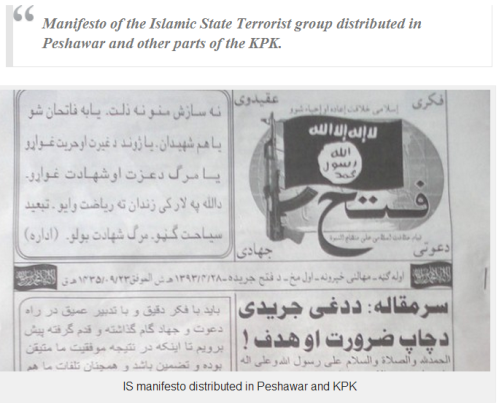 The IS manifesto was published in Pashto and Dari languages and this twelve-page booklet has been distributed in Peshawar and Afghan refugees camps. In some parts of Khyber Pakhtunkhwa the IS graffiti has been approved with favour as people have set up posters on their cars in support of the IS.

The news this morning is grim.  Further alarming for Christians, Sikh’s, Hindu’s, and many other minorities. Our concern grows as Pakistan is in a full blown crises with tens of thousands of people protesting in the streets.  Much of the media shares of two men, one a political figure and former cricket star, Imran Khan, the other a cleric, Tahir-ul Qadri, as advocates of democracy attempting to take over the government to set it honest.  Many claim the two leading the protests and calling Sharrif’s government false are themselves corrupt with ties to the Taliban.  That there is no good or bad Taliban as former President Bush once said. We are told they are one with Al-queda, ISIS, Al-Nusra, Al- Shabob, Boko Haram and the rest.

The military in Pakistan are fighting to keep their borders safe—the borders to Iran, and India and though they are strong, they are too few in number to combat this.  And it has been said that if the people converge on the parliament, the military would stand down.  This would be catastrophic as Pakistan’s Nuclear weapons would fall into hands of those who wish to destroy.

However, it is reported, Khan released the president of his own political party after he accused Khan of conspiring with the army to oust the besieged prime minister and set new elections later this month. The party official said if Pakistan’s government collapsed, Khan would be responsible.

“Imran Khan said we can’t move forward without the army,” the Telegraph reports Khan’s former party associate saying. “Imran Khan also said that all the matters had been decided and there will be elections in September.”

As the demonstrations calling for the prime minister’s resignation enter their third week, Sharif is trying to navigate Pakistan’s worst political crisis in more than a decade. With the violence increasing, what started as a routine demonstration has morphed into concerns that the government of a nuclear-armed country could collapse.

Watch this video of the protests claiming, “it is a pursuit of power by two individuals—one who is has a dedicated cult following and the other who has a political party who is probably number 2 in the country.”

There are tens of thousands of protesters in the streets organized by Imran Khan and Tahirul Qadri. This is spreading to major cities of Pakistan, like Karachi, Lahore, and Islamabad. There are reports that 400 were wounded over the weekend and at least 40 killed, as police fired on protesters with tear gas, and live fire trying to protect the residence of Sharrif.

So you can see the differing opinions, media coverage, and world opinion. Talking to those who have been directly affected and the deteriorating constitution to protect minorities, it seems Pakistan’s government is on the verge of collapsing. But the question is what will take it’s place? Will the Taliban step in under the auspice of democracy and peace? Some say what has happened in Iraq will happen there, and in a very short time. The US has extensive ties to Pakistan, tied together and originated from the Mujahadin and al-Queda. And remember the U.S. created al-Queda to fight against Russia in Afghanistan.

By mid-1979, the United States had started a covert program to finance the mujahideen. President Carter’s National Security Adviser, Zbigniew Brzezinski, was later quoted as saying that the goal of the program was to “induce a Soviet military intervention”, but later clarified that this was “a very sensationalized and abbreviated” misquotation and that the Soviet invasion occurred largely because of previous U.S. failures to restrain Soviet expansionism. (More about Operation Cyclone)

For quite some time, activists have been speaking out about the abuses of minorities in Pakistan—All minorities. Those who don’t share the brand of Islam supported by the Government are persecuted, increasingly with the Blasphemy law. Sharia law is governing in Pakistan and the people are caught in the middle. It’s also been said that restrictions have become so strict that they cannot worship and pray in public, or in a church without fear of some sort of persecution. Church’s have been threatened, with worshipers moving underground.

Pakistan’s Military has great intelligence capabilities. They were trained by the US and are still monitored by the US. They are powerful, but are fewer in numbers. We have done extensive research on the ties of these groups. Speaking to those who have fled, we are told they are united as one front whether the media or western governments want to admit it or not.

And it’s also known that Khan has always wanted to negotiate with the Taliban, and unfortunately their propaganda campaign has been successful in gaining followers, followers that are kept from the truth. Keeping information to a minimum, the tv stations were knocked off the air for a period of time over the weekend, phone service was down or very limited.

Qadri and Khan were seen together in Pakistan, today. Qadri was quoted as saying that not one of the articles of Pakistan’s constitution was upheld, and they would institute the first 40 articles of the constitution immediately. On researching the articles spoken of, you find that it does not protect the rights of minorities or give rights to the Pakistan people to worship as theychoose. In fact it states that Islamic teachings and way of life will be compulsory. (Read here)

If they are not concerned with the persecution of women, children, Christians, Sikhs, or other minorities, why is this change needed? Change is needed, but a change that protects all the citizens of Pakistan.

Many Pakistani’s and human rights activists are struggling in the fight to find peace. Pakistani Christians and Muslims alike tell us that they fear for the future of their country and their children’s future and Pakistan is at its most troubled times. That they have always stood against injustice and unfairness, whether for women or minorities. That humans always come first. And how heartbreaking it is to see fellow country men and women in desperation. And from a courageous activist (a muslim), “I join you in the prayers for global stability and sanity.”