With our borders unsecured to all incoming illegal aliens, it’s not surprising that somehow the DHS has “lost” track of 6,000 foreign nationals who entered this country and now are nowhere to be found! There is no excuse for this administration to be so irresponsible with basic security in America. We are all at risk for ISIS and every other evil under the sun because our borders are not protected and this President is giving free reign to anyone who enters, legal or illegally! This is dereliction of duty in the highest degree

Proverbs 29:2, “When the righteous are in authority, the people rejoice; But when a wicked man rules, the people groan.” 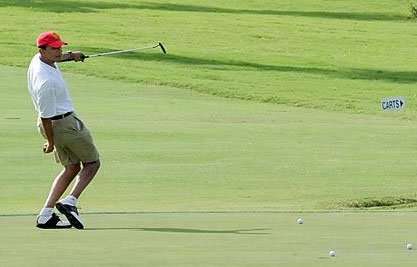 He’s Got Better Things To Do Than Worry About Stuff

By Brian Ross and Matthew Mosk, ABC News – “The Department of Homeland Security has lost track of more than 6,000 foreign nationals who entered the United States on student visas, overstayed their welcome, and essentially vanished — exploiting a security gap that was supposed to be fixed after the Sept. 11, 2001 terror attacks.

‘My greatest concern is that they could be doing anything,’ said Peter Edge, the U.S. Immigration and Customs Enforcement official who oversees investigations into visa violators. ‘Some of them could be here to do us harm.’

Homeland Security officials disclosed the breadth of the student visa problem in response to ABC News questions submitted as part of an investigation into persistent complaints about the nation’s entry program for students.

ABC News found that immigration officials have struggled to keep track of the rapidly increasing numbers of foreign students coming to the U.S. — now in excess of one million each year. The immigration agency’s own figures show that 58,000 students overstayed their visas in the past year. Of those, 6,000 were referred to agents for follow-up because they were determined to be of heightened concern.

‘They just disappear,’ said Sen. Tom Coburn, R-Okla. ‘They get the visas and they disappear.’

Coburn said since the Sept. 11, 2001 terror attacks, 26 student visa holders have been arrested in the U.S. on terror-related charges.

Tightening up the student visa program was one of the major recommendations made by the 9/11 Commission, after it was determined that the hijacker who flew Flight 77 into the Pentagon, Hani Hanjour, had entered the U.S. on a student visa but never showed up for school.” Read more.

Flashback: American Fighters In Syria Are Coming Home — And U.S. Intelligence Can’t Find Them – “The number of American extremists who have flocked to Syria is higher than previously understood, American intelligence sources say. And some of the fighters are coming home… ‘We know where some are,’ one senior U.S. intelligence official told The Daily Beast. ‘The concern is the scale of the problem we are dealing with.’ The scale of that problem by all accounts has gotten worse. Last fall, the official U.S. estimate on Americans specifically who have joined the jihad in Syria was in the low double digits. In January, the New York Times reported that at least 70 Americans have either traveled or attempted to travel to Syria. Earlier this month FBI Director James Comey told reporters that he believed ‘dozens’ of Americans were suspected to be foreign fighters in Syria, but declined to give a more precise number.” Read more.

Flashback: Muslim Prayer Rug Found On Arizona Border By Independent American Security Contractors – “… The group patrolled along the border that was a patchwork of decades old rickety fencing made from train tracks and cattle enclosures. Eventually, they were 50 yards by the border and saw a break in the wash. ‘That’s when I saw this thing laying around. And I was like, ‘What the hell is that?’ We walked over there and I didn’t really want to pull at it not knowing what was on it. I poked a bit at it with a stick and noticed some of the Arabic writing and was just like, ‘Oh boy.’ I snapped a couple of photos and then went on our patrol.’ The same contractor told Breitbart News last week that six Special Interest Aliens (SIA’s) from Afghanistan, Iraq, and Yemen were picked up by U.S. border patrol near Laredo, Texas. Each one had 60,000 Iraqi Dinars ($51.00) apiece on them.” Read more.

US Senator: ‘We’re In The Most Dangerous Position We’ve Ever Been In As A Nation’ Because Of Islamic Terror – “The ranking Republican on the Armed Services Committee in the U.S. Senate is warning that ISIS terrorists, those who this week beheaded an American journalist, are trying to develop the capability of blowing up an entire American city. The comments from Sen. Jim Inhofe, R-Okla., came in an interview with the Fox affiliate in Oklahoma City. He said the U.S. now is in ‘the most dangerous position we’ve ever been in.’ Responding to questions about terror and the threat facing Americans, he said: ‘They’re crazy out there. And they are rapidly developing a method of blowing up a major U.S. city. You just can’t believe that’s happening.’”

What Does Bill Gates Plan to Do After He Vaccinates the World Population?
April 18th, 2021 Flag And Cross