WASHINGTON — Navy jets and drones pounded ISIS rebels on Saturday in two waves of strikes, according to U. S. Central command. The first attack occurred around 11:30 a.m. ET. Surveillance aircraft observed an armored personnel carrier firing at civilian targets. It was destroyed as was another vehicle about 20 minutes later.

Armored vehicles and a truck were blown up in the second strike, according to Central Command, which oversees military operations in the Middle East.

In a statement Saturday, U.S. Central Command said the attacks were “to defend Yazidi civilians being indiscriminately attacked” by militants.

While the Islamic State’s heavy weapons and armor have made it a potent fighting force against Iraq’s military, they also make the militants vulnerable to newly authorized American airstrikes.

Unlike insurgents who use hit-and-run tactics, the Islamic State is operating more as a conventional army, often moving through open terrain where they can be easily struck from the air.

“It inherently gives you a more visible footprint,” said Jeff White, a former Defense Intelligence Agency official now at the Washington Institute for Near East Policy. White cautioned, however, that the militants do not have the organization and hierarchy of a regular military unit with a clear-cut structure.

The United States has been flying up to 50 surveillance and reconnaissance missions a day over Iraq in recent weeks, providing the American military with a clear picture of the enemy.

Brett McGurk, a State Department official, said recently the Islamic State functions more as a “full-blown army” than a typical terrorist organization. The militants are operating in large groups, with tanks, artillery and other heavy weapons, much of it U.S. equipment captured from Iraq’s army.

By contrast, the al-Qaeda-linked insurgents the United States fought in Iraq after the U.S.-led invasion in 2003 were equipped only with light arms and operated in small groups.

In Afghanistan, American forces have faced an enemy that operates in small groups without heavy equipment, allowing them to easily hide in the mountains. 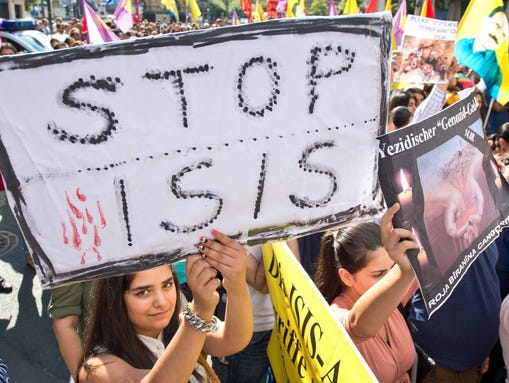 On Saturday, Obama said there was no timeline for ending the strikes.

“So far, these strikes have successfully destroyed arms and equipment that ISIL terrorists could have used against Irbil,” Obama said, referring to the militant group by its acronym.

Obama: We won’t be dragged into another war

Obama said he authorized the airstrikes in order to protect Americans and support a humanitarian mission to assist Yazidis, a religious minority that fled their homes and were trapped in the mountains.

Islamic State militants had driven the Yazidis from their homes in Ninjar and were beginning to threaten Irbil, the capital of the Kurdish region and home to a U.S. Consulate and a joint U.S.-Iraqi military operations center.

The Kurdish militia, called the peshmerga, is a well-disciplined force, but prior to the airstrikes they were struggling to defend towns and villages along the border of the Kurdish region.

They faced a formidable enemy in the Islamic State, which captured tanks, armored vehicles and other weapons and equipment, much of it supplied by the United States, when they attacked Mosul in June. Four Iraqi divisions collapsed at the time, leaving much of their equipment and arms behind.

After nearly six months of political and legal maneuvering, the Maricopa County, Arizona forensic audit is about to commence   By Lyle Rapacki (TCP News)  The adversarial...
Read more
FEATURED ARTICLES

“Lions never bow before hyenas.” -Artur Pawlowski   By Bradlee Dean People across the globe have begun to awaken to the fact that they once again have...
Read more