WASHINGTON — You could have heard a pin drop as a hush fell over the audience. It was a gentle and touching moment between father and son – ironically, right in the heart of raw political power, the U.S. Capitol.

Embracing tenderly, pastor Rafael Cruz turned to his son and said, simply, “I love you.”

“How precious it is to have a good dad,” he observed.

On this special night, the love between father and son was symbolic of the deep, abiding love the “father of our country” had for America, when George Washington dedicated the new nation to God.

Ted and Rafael Cruz were among a number of religious leaders and lawmakers who gathered at the Capitol Wednesday evening to salute and honor Washington as a devout man of prayer. They also sought to remind America how important religious belief, especially a faith in Providence and the guiding hand of God, were to the Founding Fathers, particularly, the nation’s first president.

“Washington: A Man of Prayer, 2014″ commemorates the events of April 30, 1789, when, after he was sworn in at Federal Hall in New York City as the new nation’s first leader, President George Washington, accompanied by Congress, proceeded to St. Paul’s Chapel where, as one of his first official acts, he offered a prayer of dedication to God on America’s behalf.

Now in its third year, “Washington: A Man of Prayer” is the brainchild of Dan Cummins, pastor of Bridlewood Church in Bullard, Texas. The event was broadcast globally by the Daystar Television Network, with WND Films and CBN providing the satellite feed from Statuary Hall in the Capitol.

The evening was a combination of prayers, history lessons, expressions of joy, gratitude, repentance and celebration.

The elder Cruz recounted his tremendous gratitude to God in finding freedom to practice his religion in America after suffering persecution, imprisonment and torture in Cuba.

But, he wondered, “If we lose our freedom here, where will we go?”

The pastor then asked God to restore the nation’s greatness as a bastion of liberty.

His son, the senator, said that just as Washington dedicated America to God, the evening’s gathering had assembled to recommit the nation to the Almighty.

Cruz also prayed for the safe return of some 250 schoolgirls kidnapped by Muslim jihadists in Nigeria, asking God to erect a hedge of protection around them and to “throw boulders” at their captors.

The senator also prayed for pastor Saeed Abedini, the American who has endured torture while serving one year of an eight-year prison term in Iran for practicing his Christian faith, noting it was Abedini’s 34th birthday that evening.

And, echoing the sentiments of many speakers during the evening, Cruz prayed that God would restore America’s legacy as a shining city on a hill.

The evening was kicked off by congressional host Rep. Michele Bachmann, R-Minn., who related how the U.S. Capitol was once the largest church on the East Coast at the beginning 1800s.

It was Rep. Louie Gohmert, R-Texas, who dug up that information by contacting the Library of Congress’ Congressional Research Service and learning about the history of prayer in the U.S. Capitol.

He told the audience how the prayers were held from 1807 to 1857 in the chambers where the House of Representatives first met, later to become Statuary Hall, the very room in which they were gathered.

President Thomas Jefferson, the man who coined the expression “separation of church and state,” had approved nondenominational Christian services in the hall, seeing no conflict with the Constitution.

Gohmert had previously told WND it was a long-forgotten fact of history that shows just how far the modern interpretation of the First Amendment has strayed from the original intent of the founders.

The Texan gave another history lesson that kept the crowd mesmerized, relating how near where he was standing had sat John Quincy Adams, who returned to Congress after his stint as the nation’s sixth president. The congressman also told how the son of America’s second president dedicated his career to realizing the Founding Fathers’ ambition of abolishing slavery.

Gohmert described how Adams mentored a young, lanky attorney from Illinois who sat in the back of the room. And, as the congressman revealed it was President Abraham Lincoln, who would eliminate slavery as the direct realization of a dream from the inception of America by its founders, soft but astonished murmurs of “I didn’t know that” and “Isn’t that something?” rippled through the crowd.

Another fascinating glimpse of American history was provided by a woman with quite a historical background herself, Rosemary Schindler Garlow, the wife of pastor Jim Garlow and niece of Oscar Schindler, the German businessman who saved so many souls from Hitler’s concentration camps and who was immortalized in the film “Schindler’s List.”

She spoke of the Jewish community’s indispensable role in winning the Revolutionary War and ensuring the birth of the American nation and the remarkable story of Haym Solomon, who immigrated to New York from Poland in search of religious freedom.

Solomon raised a majority of the war aid from France and Holland by selling bills of exchange to American merchants.

Garlow described how Washington found himself desperately needing $20,000 to conduct what would turn out to be the final and decisive battle of the war, the assault on Yorktown .

When Robert Morris, the finance superintendent for the colonies, told the general there was no money, Washington gave the order “Send for Haym Solomon.” In just 15 minutes, Solomon raised the $20,000 through the sales of bills of exchange and by canvassing the Jewish community for donations.

Overall, Solomon raised $800,000 for American independence, a total that Garlow said, with interest, would amount to $2.5 trillion in today’s dollars. For his efforts, the immigrant died penniless, having never received 1 cent of remuneration for his extraordinary efforts.

Again, expressions of amazement spread through the crowd in Statuary Hall.

Another particularly mesmerizing speaker was Senate Chaplain Rev. Harry Black, his deep baritone and rich, moving oratory reminding more than one listener of “the voice of God.”

He said he was optimistic about America, because “we have a weapon so much more powerful than anything the military has: prayer,” prompting a cascade of whispered “Amens.”

Finally, someone who is not afraid to stand for righteousness! There was more written on this article but I just wanted to take the highlights and include them in this article.  There could not be a greater truth than the fact that if we, as a nation, do not turn back to our Creator, we will be destroyed.  America has been blessed from its inception because we began as a country who revered and honored our God!  At one time there was an understanding of the people that all the good we received came from God.  However, there is now a darkness upon this nation which blinds most to that truth.  Greed and self-entitlement have occluded the truth and have pushed God and his ways out of this nation.  Rebellion has taken the place of worship.

How did this happen and why aren’t we doing something to stop it? Unfortunately, the voices of evil are shouting out their agenda while those who stand for righteousness are barely getting their voice out above a whisper.  We have little time left.  I can only pray that God will raise up his people to finish the work of his kingdom before he returns.  The times are in God’s hands.  I do not want to go to glory knowing that I left one call from God unanswered.  I not only should stand for Christ, I MUST stand for Him.  He is our only hope.  Everything else in this world is perishing.

Please listen to the words of this old song by the Sam Cooke & Soul Stirrers. It speaks volumes: 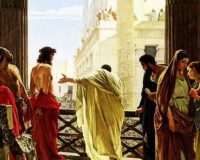 Why the Baser Sort are Put (Not Elected) Into Position of Power-They are Easily Controlled!
April 8th, 2020 Sons of Liberty Media