The Left has a long track record of lying about their intentions.

On a recent episode of This Week, George Stephanopoulos was talking with DNC vice chairwoman Donna Brazile, when she said: “I don’t think you can create two classes of citizens in this society, one with legal status and the right to vote, and one without.”

The Left has a long track record of lying about their intentions. Recently, they have lied about Obamacare, claiming it was meant to give the poor an opportunity at healthcare. We all know there are numerous ways by which the healthcare industry can be fixed without a massive government takeover, but that’s the point. The Left doesn’t care about the poor, they want bigger government. They think it is for the betterment of man that we be under the loving care of a monstrous matriarchal government.

Every effort made by the Left at legislation is designed to push our country toward their ultimate goal: a Marxist paradise. Most of the country doesn’t want to live in soviet Russia, so the Left must disguise their policy as something good and lovely.

The issue at the top of the liberal agenda is immigration. They know that if they can grant amnesty to the millions of illegal immigrants in the United States, those immigrants will eventually be allowed to vote. Guess who they’ll vote for? Yeah, Democrats. Republicans will never again win an election. Liberals have denied on many occasions that their ultimate intention is voting rights. They have claimed many times that the notion that they want illegal aliens to vote is preposterous. They just want “equality.” Finally, someone has said it.

Donna Brazile let the cat out of the bag. This is how they’re going to play the game. They’re going to first ask for legal residency. After that, the Left will rise up, and pretend to feel bad for the apartheid nation we have created, in which some can vote, and others are left in the cold. Then the faux sympathies being projected by the Left will get picked up by the media, and run around the clock, until it somehow seems like a good idea to grant them full citizenship. Then the Left—who once claimed to never ever want illegal immigrants to have voting rights—will have won the game.

The Left will win in part because the Republicans will go along with whatever the Democrats do, thinking it will benefit them. Republicans will follow the Democrats into a hell of the Democrats’ making. There were several ways the voting rights for illegals situation could have gone, but Donna Brazile just revealed the course being taken by the Left. Just wait and see. 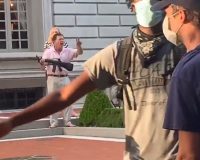 BREAKING: “I’d like to punch Trump in the face” Actor Robert De Niro Is Running Out Of Money
July 10th, 2020 Right Wing Tribune