Home / FEATURED ARTICLES / State of The Union Speech 2014 – Is the President Insane, Misinformed, or Out to Destroy the Country?

State of The Union Speech 2014 – Is the President Insane, Misinformed, or Out to Destroy the Country?

By Tony Elliott on Freedom Outpost

After listening to the President’s 2014 State of The Union speech, there were three things that came to mind: Either he has gone completely insane, become completely detached from reality, or he is deliberately out to destroy our country.

Since he gets regular medical checkups, he’s definitely not crazy.

We know the President gets constant briefings on happenings both at home and abroad, so he cannot possibly be unaware of the actual State of The Union.

This only leaves the third most plausible explanation which is he is out to destroy the country.

Everything the President said in this speech was detrimental to this nation in every way and complete fabrication of what is best for the country.

His claim of the unemployment situation being better now than it has been in the last 5 years is a total farce.

The reality is the number of people unemployed today is near the same as it was some 5 years ago and possibly a bit higher. The numbers, of course, look slightly better now than then, but this is only because people currently on unemployment are counted. If the percentage included all who were unemployed such as those still not working who have used up their benefits long ago and those who aren’t working that never got unemployment benefits, the actual number would be closer to 30%.

Try telling job seekers in California, New Mexico, or Ohio, for instance, that the unemployment picture is brighter today. At the risk of getting slapped, at the very least you would be labeled a lunatic.

Interestingly, the President’s answer to creating more jobs is tied into his environmental aspirations of transforming the country from a primarily fossil fuel based economy to a cleaner natural gas and renewable energy society. This can never be achieved, primarily because of the tremendous costs involved in the conversion as well as the fact that renewable energy sources such as wind power and solar end up employing less than 20 people per multimillion dollar project after completion. This also doesn’t take into consideration the fact that wind power only produces less than 1% of 1% of electricity to the grid and solar only around 20%. The inefficiency of wind and solar energy along with their high cost in subsidies and in the form of electric bills will actually make it harder for people to survive who are strapped for money, during this 5 year long recession.

The President’s idea of high tech jobs will be more costly than the country can afford since we are already some 4 trillion in debt. Thus, any opportunity that requires government assistance is an impossibility since the country is already bankrupt.

The President’s answer for improving the economy also gives citizenship to millions of illegal aliens.

Only someone out to destroy the economy would import millions of workers to an already devastated economic situation.

The President’s claim that the debate is over in regards to climate change is a ridiculous statement since actual weather, climate, and geophysical records completely destroy the bogus computer models issued by UN climate based organizations. The whole global warming/climate change claim is made from individuals who are not qualified to make any assertions on climate since they are not meteorologists, only environmentalists masquerading as such.

The President’s claim that parts of the US coasts are being flooded by rising seas is erroneous. Just where are these flooded coastal areas, Mr. President?

The claim of drought devastation in California and other parts of the western US is deception in all its glory since these parts of the country are natural desert areas and normally receive little precipitation.

The minimum wage raise to $10.10 per hour is a bad idea all around economically, since more workers will get laid off, have their hours cut, and those currently making $10.00 an hour will have to get paid more resulting in time cuts. This will happen because most businesses simply cannot afford to pay their minimum wage employees this amount and stay in business.

The President’s promise to bypass Congress through Executive Order whenever he doesn’t get what he wants amounts to Socialistic Dictatorship that cannot be tolerated in America. The course of Constitutional law must be adhered to.

In foreign policy, the President continues to legitimatize domestic spying and the need to fight terrorism. While all along helping the very terrorist organizations at home and abroad with financial support, arms, and actual military intervention. It is a complete fabrication for the President to state his concerns about terrorism and the need to fight it, while he is helping them in all corners of the world.

What this State of The Union speech really tells us is we have a president, who will stop at nothing in his quest to destroy the very country he is leading. 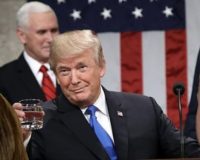 As Dems Work To Burn America To The Ground, Trump Accomplishes The Impossible, Announces: “This is Better Than a ‘V,’ This is a Rocket Ship!”
June 6th, 2020 Right Wing Tribune

Minneapolis Cop Charged In George Floyd’s Murder Was Hired Despite Having A Criminal Record With 7 Convictions
June 6th, 2020 Sons of Liberty Media