The Humility Of Christ’s Birth

A Devotion by Cheryl Zelenka

“And the Word became flesh and dwelt among us, and we beheld His glory, the glory as of the only begotten of the Father, full of grace and truth.” John 1:14 (NKJV)

“And behold, an angel of the Lord stood before them, and the glory of the Lord shone around them, and they were greatly afraid. Then the angel said to them, “Do not be afraid, for behold, I bring you good tidings of great joy which will be to all people. For there is born to you this day in the city of David a Savior, who is Christ the Lord. And this will be the sign to you: You will find a Babe wrapped in swaddling cloths, lying in a manger.” Luke 2:9-12 (NKJV)

“Wisdom’s instruction is to fear the Lord, and humility comes before honor.” Proverbs 15:33 (NIV)

God planned the birth of Christ even before Adman and Eve were created and placed in the Garden of Eden. He knew they would be tempted and deceived by the serpent. I am sure God’s heart broke when sin was birthed in the paradise He had created for them.

The humble emergence of baby Jesus gives us insight into the heart of God. He did not pick a wealthy couple of immeasurable means to care for His son. He did not pick a mighty man of power or a famous and prominent woman to raise His son. Instead He saw the quiet and sincere faith of both Joseph and Mary and selected them for the honor. An honor that was both costly and painful. But because of their humility, they were also to become special examples of God’s grace.

“But He gives more grace. Therefore He says:

“God resists the proud,  but gives grace to the humble.”” James 4:6 (NKJV)

Humility is important to God. Take note of Christ’s place of birth, a stable. God provides for all our needs, so Mary was not forced to give birth to the Son of man in the wilderness. No, a warm stable that was out of the elements was God’s provision. This humble environment was the place God chose for our Deliverer to enter the world…. But why? There must be a reason!

When we are in need, there is a greater urge to call upon God and rely on His provisions. Because Mary accepted the honor of being the Mother of Jesus, she faced much ridicule and doubt from her community….even from her betrothed. She fell upon the grace of God and in her humility He smiled and provided.

When God’s son was about to enter the world, He again saw Mary’s needs and provided a warm and safe place for the birth. He did not provide a wealthy establishment or mansion. It was to rural shepherds that angels appeared and announced our Savior’s birth. This act shows God’s concern for His people, regardless of social class and vocation. We all matter to our heavenly Father.

Jesus came into the world to save sinners, yet there are both rich and poor sinners. Again I ask, why did God give Jesus such a humble birth and life, especially since leaving heaven was already a sacrifice of humility beyond our comprehension?

We find the answer in Scripture.

By reading Philippians 2:3-9 we see the importance of putting others first, esteeming them better than ourselves. God wants us to be concerned with the needs of others. This is one way to grow in love. In addition, we are told to have a mind like Christ. Jesus was humble and therefore, we too should walk in humility for it pleases our Creator. Jesus humbled himself by becoming the Son of man, taking on even the appearance of man. Because of His humble obedience at the cross, God has rewarded Him with a name above all others.

“Let nothing be done through selfish ambition or conceit, but in lowliness of mind let each esteem others better than himself. Let each of you look out not only for his own interests, but also for the interests of others. Let this mind be in you which was also in Christ Jesus, who, being in the form of God, did not consider it robbery to be equal with God, but made Himself of no reputation, taking the form of a bondservant, and coming in the likeness of men. And being found in appearance as a man, He humbled Himself and became obedient to the point of death, even the death of the cross. Therefore God also has highly exalted Him and given Him the name which is above every name” Philippians 2:3-9 (NKJV)

“For I say, through the grace given to me, to everyone who is among you, not to think of himself more highly than he ought to think, but to think soberly, as God has dealt to each one a measure of faith.” Romans 12:3 (NKJV)

“Nor do they light a lamp and put it under a basket, but on a lampstand, and it gives light to all who are in the house. 16 Let your light so shine before men, that they may see your good works and glorify your Father in heaven.” Matthew 5:15-16 (NKJV)

The Possibilities in Prayer

Is It Okay to Complain?

Schiff Knew About ‘Bounties’ On US Soldiers, But Stayed Silent & Did Not Tell Congress
July 2nd, 2020 Flag And Cross 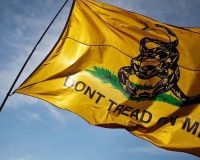