Senate Majority Leader Harry Reid said the implementation of Obamacare is a step toward an eventual single-payer national healthcare system.

The Las Vegas Sun reports that Reid made the statement during a Friday appearance on the PBS program “ Nevada Week in Review,” Reid said that Congress could eventually reform the Affordable Care Act into one providing universal healthcare without relying on the private health insurance industry.

“What we’ve done with Obamacare is have a step in the right direction, but we’re far from having something that’s going to work forever,” Reid said.

During the same interview, Reid noted that Senate Democrats originally pushed for a single-payer plan back in 2009 but were met with opposition by former Sen. Joe Lieberman. In order to curb Lieberman’s opposition, Reid took the public option off the table as well as making other concessions.

“We had a real good run at the public option … don’t think we didn’t have a tremendous number of people who wanted a single-payer system,” Reid said. “We had to get a majority of votes. In fact, we had to get a little extra in the Senate, we have to get 60.”

As the Weekly Standard notes, conservative critics of Obamacare such as Oklahoma Senator Tom Coburn have previously said they believe the Affordable Care Act was specifically designed to pave the way for an eventual single-payer system . However, Coburn’s argument has been that the health care legislation was intentionally designed to fail, creating the need for a more comprehensive law.

“By making private insurance unaffordable for everyone, it will become available to no one,” Coburn wrote in 2012. “All that will be left is government-centered, government-run, single-payer health care.”

The forthcoming health exchanges included under Obamacare have made news in recent days, with members of Congress being given a waiver of some of the program’s provisions and some states like Oregon saying their healthcare exchange selection program will not be fully in place by the government’s October 1 deadline . 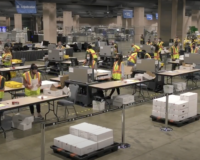 Pa. Lt. Gov.: You don’t have a constitutional right to say the election was rigged
January 17th, 2021 Liberty Unyielding