Awesome photos of the sun!!

The Sun is now in the quietest phase of its 11-year activity cycle, the solar minimum – in fact, it has been unusually quiet this year – with over 200 days so far with no observed sunspots. The solar wind has also dropped to its lowest levels in 50 years. Scientists are unsure of the significance of this unusual calm, but are continually monitoring our closest star with an array of telescopes and satellites. Seen below are some recent images of the Sun in more active times. (21 photos total) 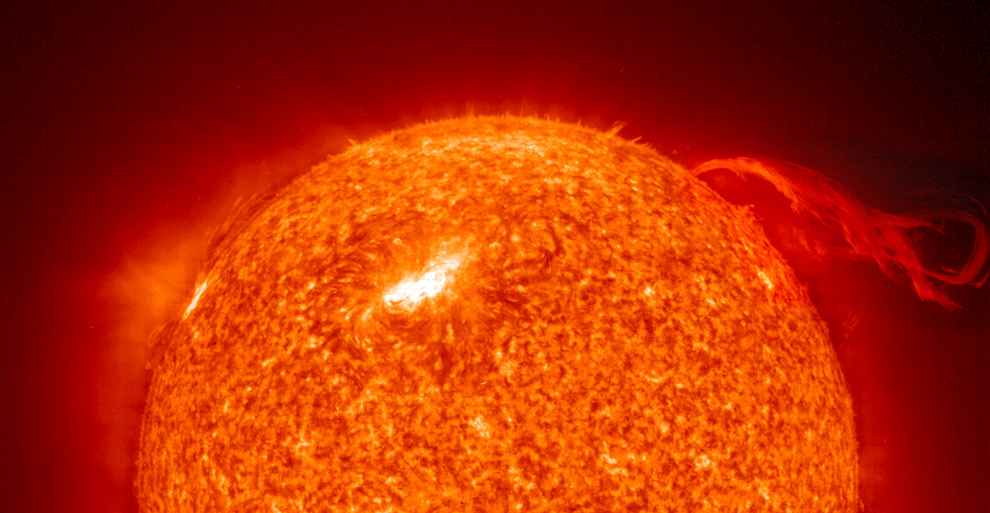 A sweeping prominence, a huge cloud of relatively cool dense plasma is seen suspended in the Sun’s hot, thin corona. At times, promineces can erupt, escaping the Sun’s atmosphere. Emission in this spectral line shows the upper chromosphere at a temperature of about 60,000 degrees K (over 100,000 degrees F). Every feature in the image traces magnetic field structure. The hottest areas appear almost white, while the darker red areas indicate cooler temperatures. (Courtesy of SOHO/EIT consortium) 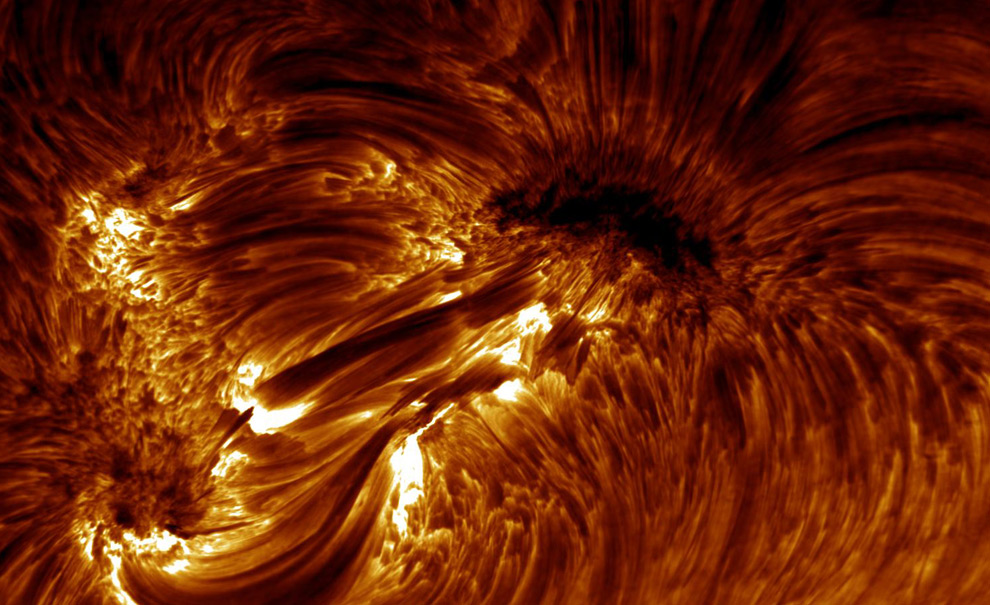 NASA’s STEREO satellite captured the first images ever of a collision between a solar “hurricane”, called a coronal mass ejection (CME), and a comet on April 4, 2007. The collision caused the complete detachment of the comet’s plasma tail. Comets are icy leftovers from the solar system’s formation billions of years ago. They usually hang out in the cold, distant regions of the solar system, but occasionally a gravitational tug from a planet, another comet, or even a nearby star sends them into the inner solar system. Once there, the sun’s heat and radiation vaporizes gas and dust from the comet, forming its tail. Comets typically have two tails, one made of dust and a fainter one made of electrically conducting gas, called plasma. (NASA/STEREO) # 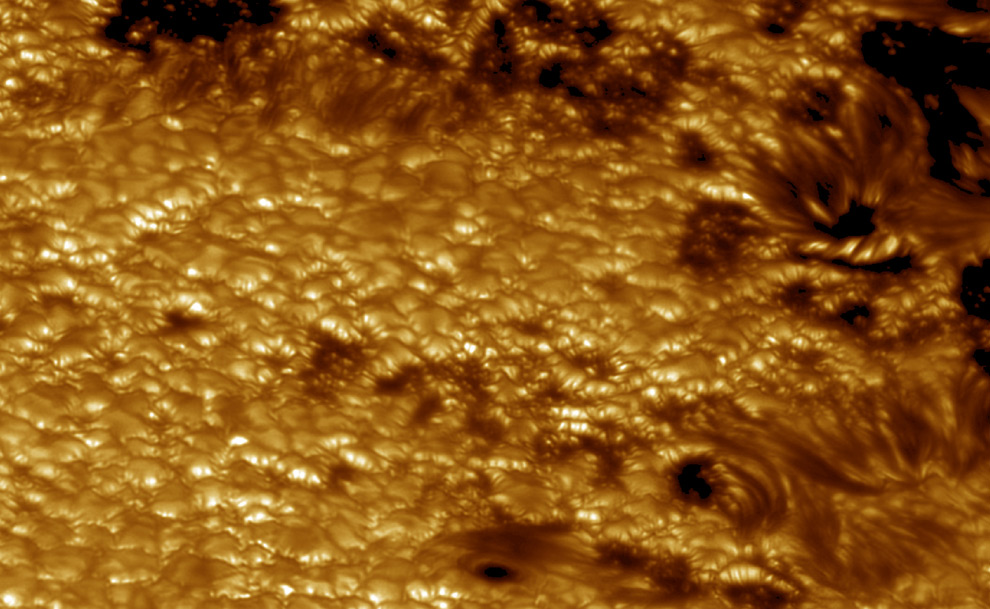 Image of an active solar region taken on July 24, 2002 near the eastern limb of the Sun. The image highlights the three-dimensional nature of the photosphere when seen at these large angles. The structures in the dark sunspots in the upper central area of the image show distinct elevation above the dark “floor” of the sunspot. The height of the structures has been estimated by Dr. Bruce Lites of the High Altitude Observatory to be between 200 and 450 km. The smallest resolvable features in the image are about 70 km in size. There are also numerous bright “faculae” visible on the edges of granules that face towards the observer. (Prof. Goran Scharmer/Dr. Mats G. Löfdahl/Institute for Solar Physics of the Royal Swedish Academy of Sciences) # 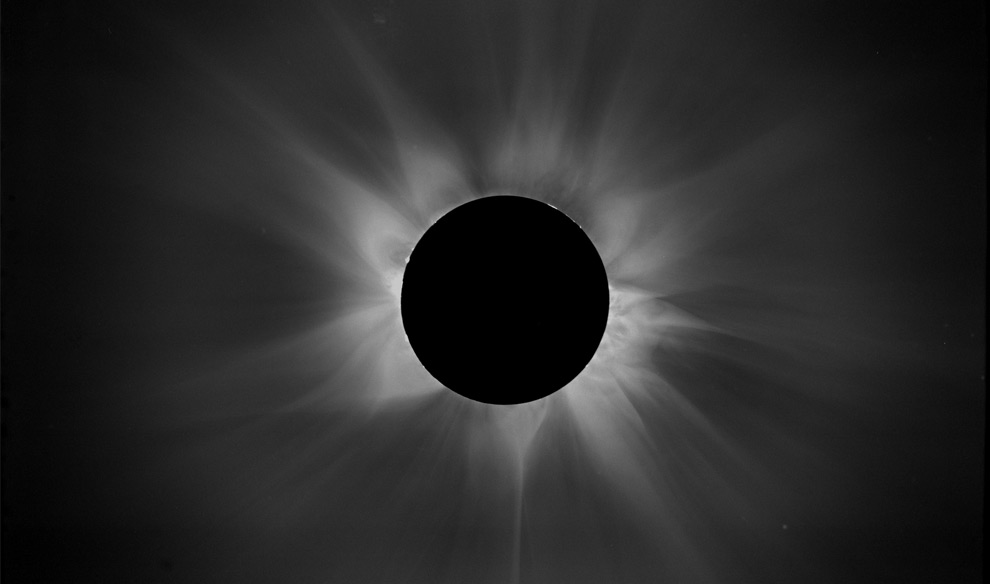 The total solar eclipse of February 16, 1980 was photographed from Palem, India, by a research team from the High Altitude Observatory of the National Center for Atmospheric Research. The photograph of the solar corona was taken with a camera system developed by Gordon A. Newkirk, Jr. This specialized instrument photographs the corona in red light, 6400 A — through a radially graded filter that suppresses the bright inner corona in order to show the much fainter streamers of the outer corona in the same photograph. (Rhodes College, Memphis, Tennessee / High Altitude Observatory (HAO), University Corporation for Atmospheric Research (UCAR)) # 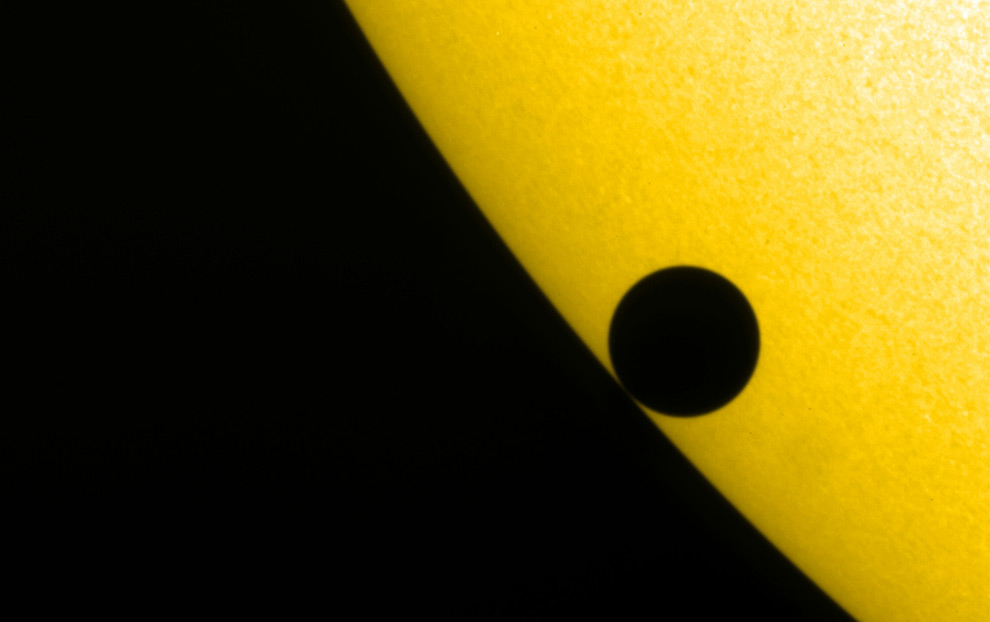 The planet Venus is seen by NASA’s TRACE satellite, at the start of its transit across the sun on June 8, 2004. (NASA/TRACE) # 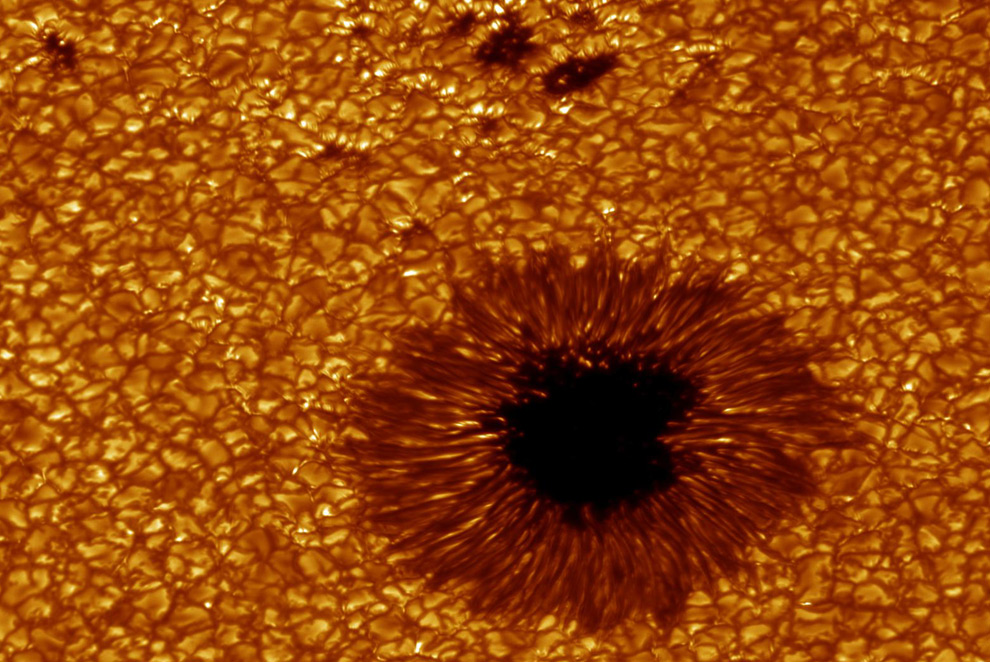 A view of a sunspot and granules on the Sun’s surface, seen in the H-alpha wavelength on August 4, 2003. (Swedish 1-m Solar Telescope (SST) operated by the Royal Swedish Academy of Sciences, Göran Scharmer and Kai Langhans, ISP) #

Solar flares produce seismic waves in the Sun’s interior that closely resemble those created by earthquakes on our planet. On May 27, 1998, researchers observed this flare-generated solar quake that contained about 40,000 times the energy released in the great earthquake that devastated San Francisco in 1906, equivalent to an 11.3 magnitude earthquake, scientists calculated. Over the course of an hour, the solar waves traveled for a distance equal to 10 Earth diameters before fading into the fiery background of the Sun’s photosphere. Unlike water ripples that travel outward at a constant velocity, the solar waves accelerated from an initial speed of 22,000 miles per hour to a maximum of 250,000 miles per hour before disappearing. (Courtesy of SOHO/EIT consortium. SOHO is a project of international cooperation between ESA and NASA) #

An animation of the sun, seen by NASA’s Extreme ultraviolet Imaging Telescope (EIT) over the course of 6 days, starting June 27, 2005. (Courtesy of SOHO/EIT consortium) #

Hinode (formerly known as Solar-B) successfully captured a massive solar flare on 13 December 2006. It was one of the largest flares occurring in that period of solar activity minimum. (JAXA/NASA/PPARC) # 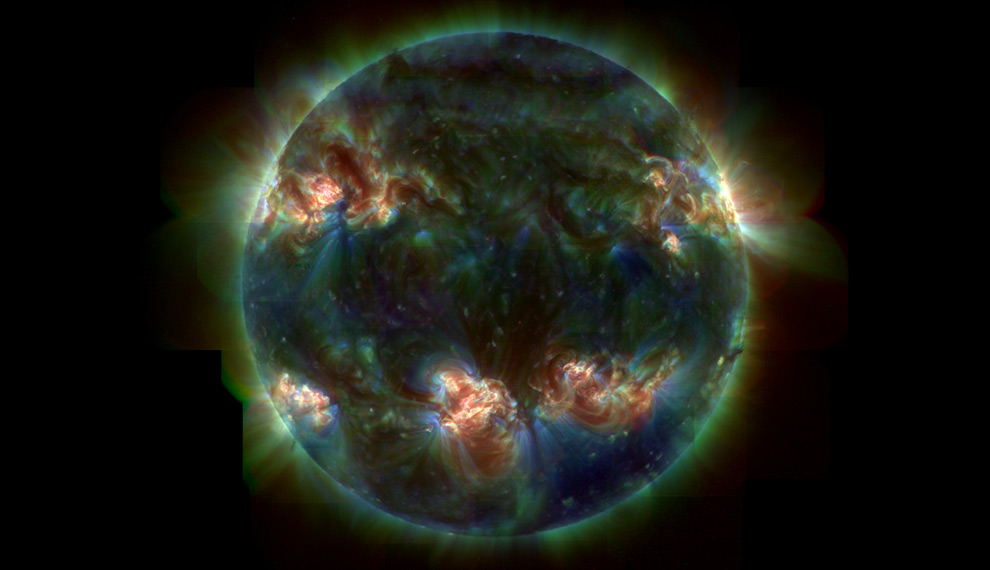 The image shows the corona for a moderately active Sun, with some (red) hot active regions in both hemispheres, surrounded by the (blue/green) cooler plasma of the quiet-Sun corona. Notice also the north polar-crown filament, the trans-equatorial loops, and the coronal hole in the south-east (lower-right) corner of the image and the smaller one over the north pole. This image shows the solar corona in a false-color, 3-layer composite: the blue, green, and red channels show the 171Å, 195Å, and 284Å wavelengths, respectively (most sensitive to emission from 1, 1.5, and 2 million degree gases). (TRACE Project, Stanford-Lockheed Institute for Space Research, NASA) # 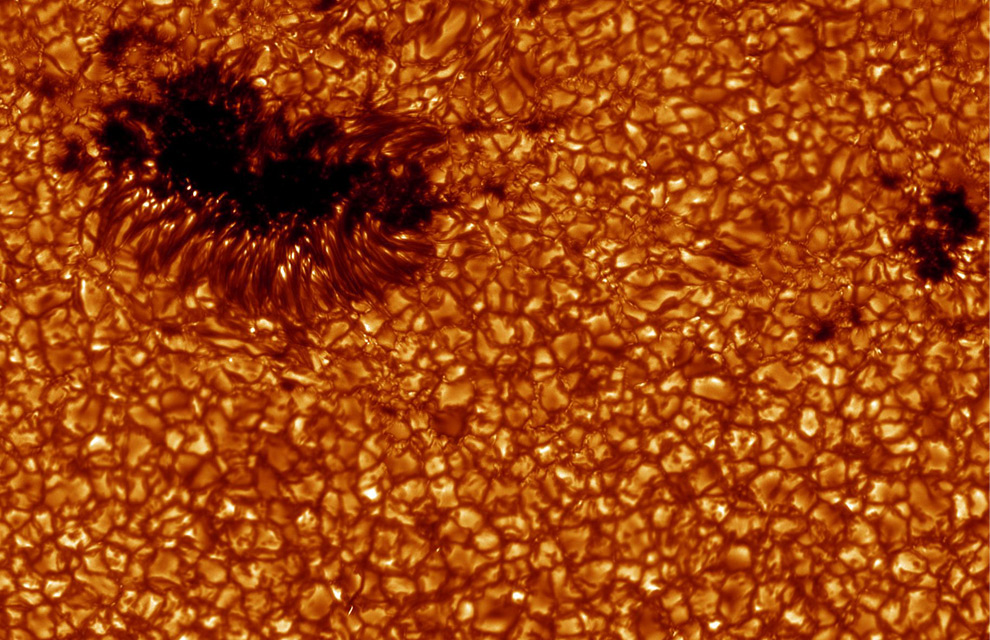 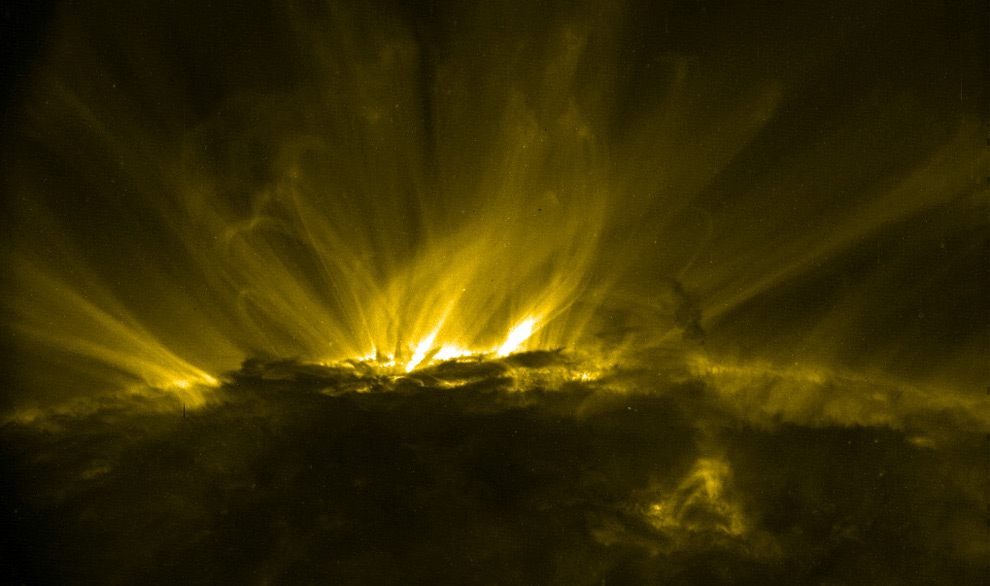 This TRACE 171Å-wavelength image from November 11, 2006 shows a sizeable active region at the east limb of the Sun (rotated clockwise 90 degrees so north is to the right) just as it rotates onto Earth-facing hemisphere. Notice the low-lying dark structures of filaments at the leading edge of the region, some “levitating” dark material on the right-hand side of the region, and the small ephemeral region towards the lower right. (NASA/TRACE) # 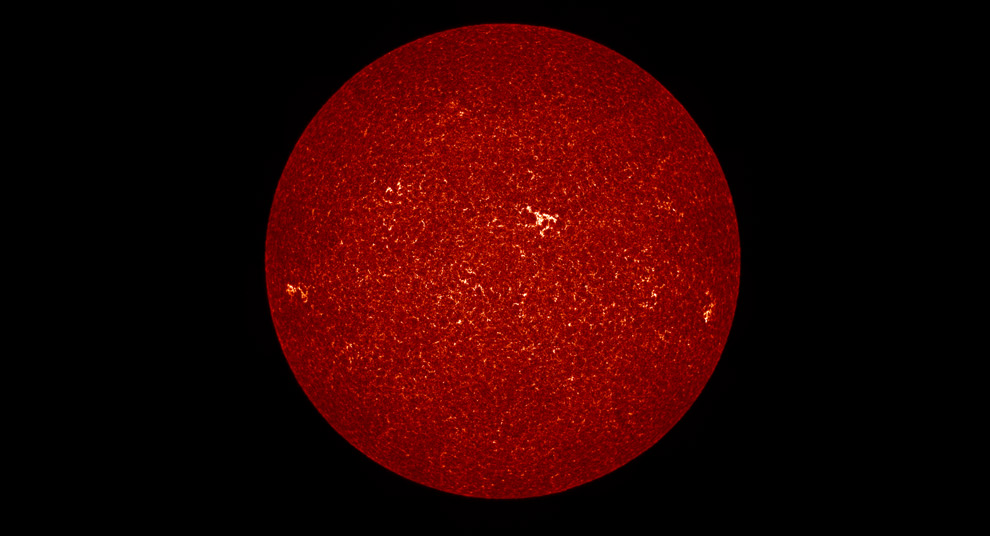 The Sun, observed on May 22, 2008. With the Sun persisting in a near-minimal state of activity, only a few small regions of some activity are seen on the disk. The cell-like appearance is formed by the multitude of small clusters of magnetic flux that are collected in the downflow regions of the supergranular network of convective motions. (NASA/TRACE) #

TRACE 171Å image of an erupting solar filament above Active Region 9077 on July 19, 2000. Filaments are concentrated bundles of magnetic field filled with relatively cool gas, suspended in the solar corona. When they become unstable, they can erupt, triggering coronal mass ejections and solar flares. The dark material here is relatively cool, while the bright material is hotter than a million degrees. As this hot material cools, it condenses and drains down the lines of magnetic field in the corona much like beads moving along a wire, a process some scientists refer to as “coronal rain.” (Caption courtesy Dan Seaton, Photo courtesy Dick Shine, NASA/TRACE) # 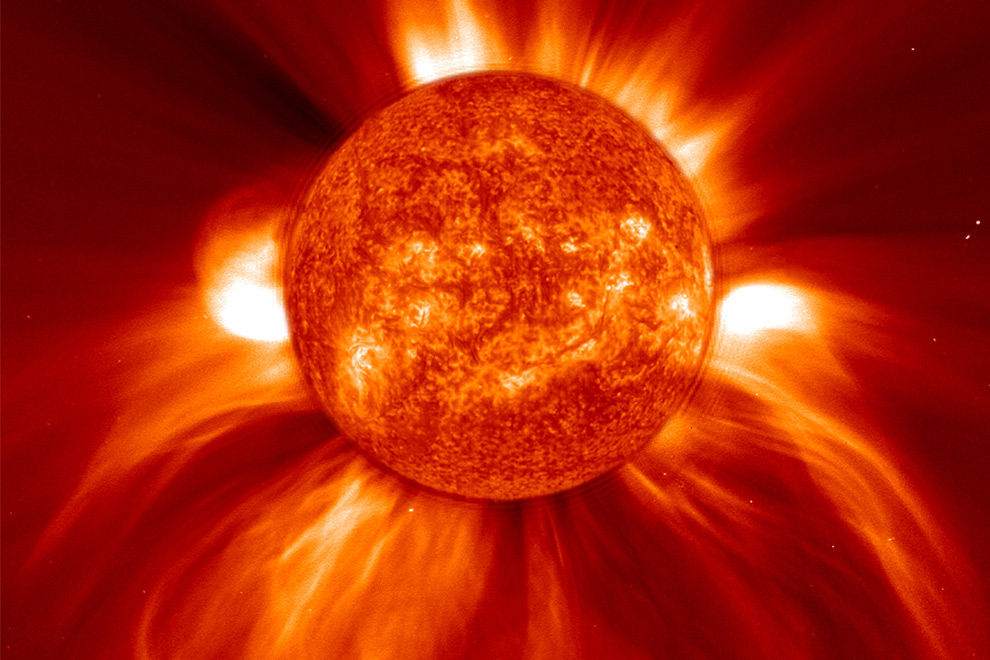 This LASCO C2 image, taken 8 January 2002, shows a widely spreading coronal mass ejection (CME) as it blasts more than a billion tons of matter out into space at millions of kilometers per hour. The C2 image was turned 90 degrees so that the blast seems to be pointing down. An EIT 304 Angstrom image from a different day was enlarged and superimposed on the C2 image so that it filled the occulting disk for effect (Courtesy of SOHO/LASCO consortium) # 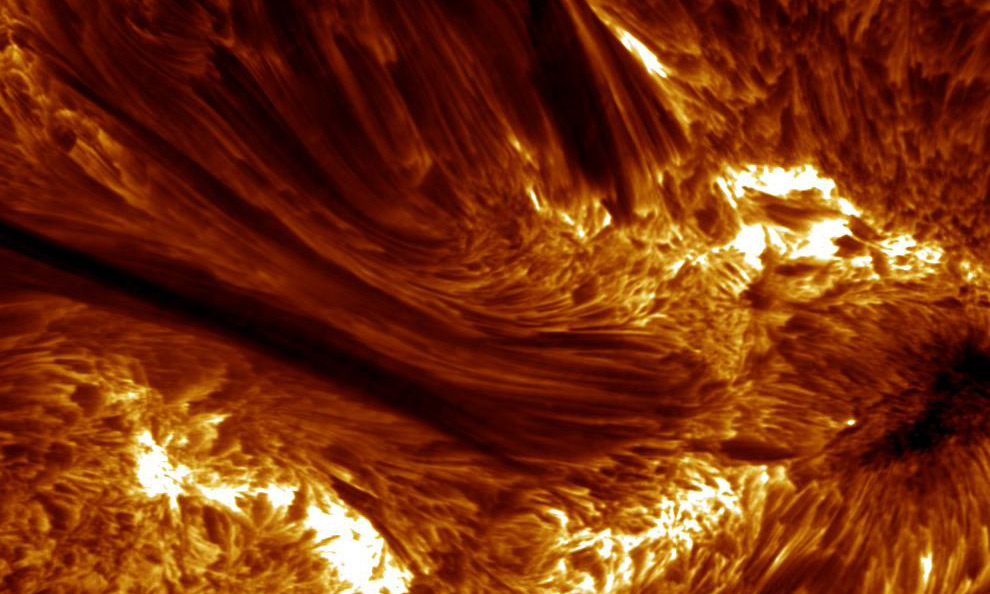 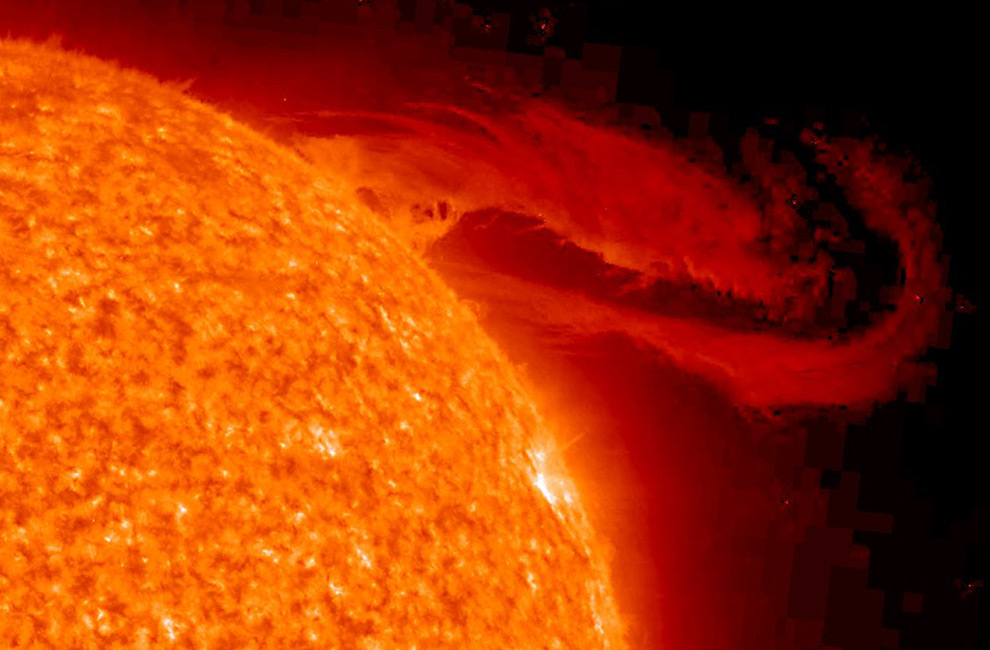 NASA’s STEREO (Ahead) spacecraft observed this visually stunning prominence eruption on Sept. 29, 2008 in the 304 wavelength of extreme UV light. It rose up and cascaded to the right over several hours, appearing something like a flag unfurling, as it broke apart and headed into space. The material observed is actually ionized Helium at about 60,000 degrees. Prominences are relatively cool clouds of gas suspended above the Sun and controlled by magnetic forces. (NASA/STEREO) # 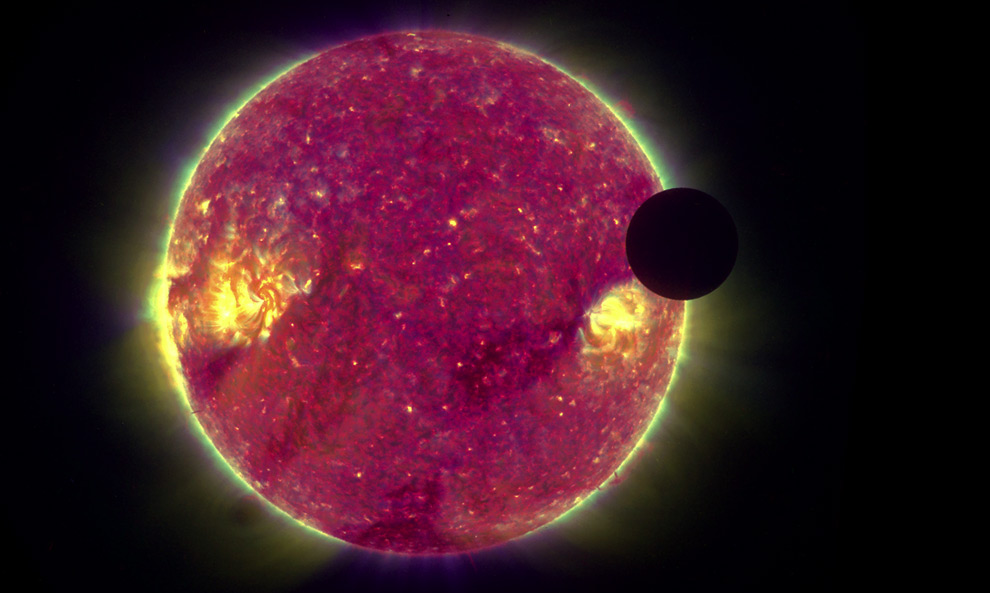 A transit of the Moon across the face of the Sun on February 25, 2007 – but not seen from Earth. This sight was visible only from the STEREO-B spacecraft in its orbit about the sun, trailing behind the Earth. NASA’s STEREO mission consists of two spacecraft launched in October, 2006 to study solar storms. STEREO-B is currently about 1 million miles from the Earth, 4.4 times farther away from the Moon than we are on Earth. As the result, the Moon appears 4.4 times smaller than what we are used to. (NASA/STEREO) # 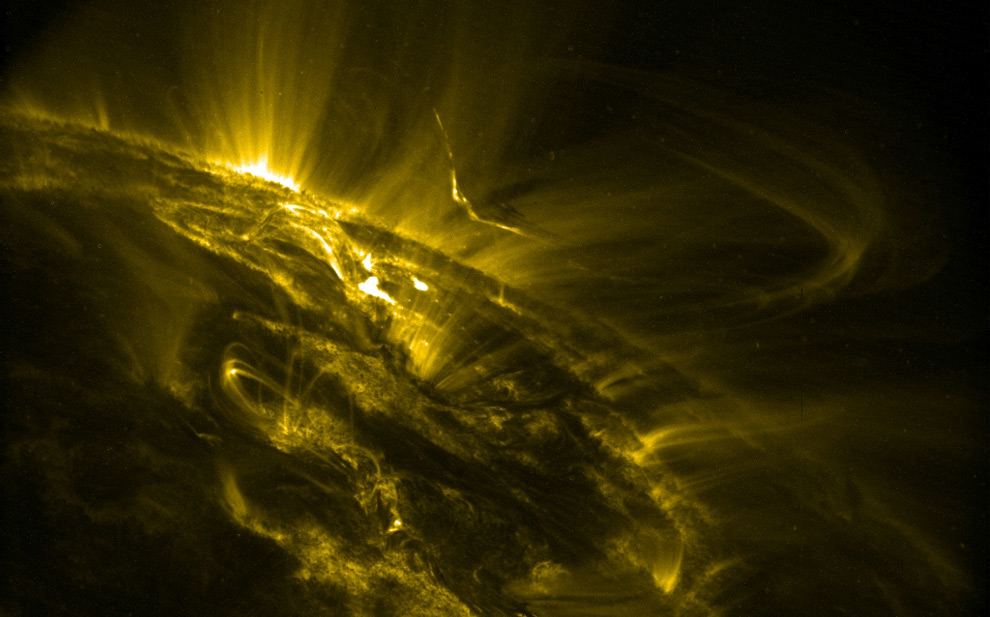 On September 30, 2001, TRACE observed an M1.0 flare in an active region very near to the solar limb. Fragments of a prominence hovered above the regions, with filamentary dark (relatively cool) material moving along the field lines, which then spread to form this dragon-like bright outline. (NASA/TRACE) #

Capitol Police knew about the riot on January 6th before it happened, and did little about it   By Greg Holt (TCP News)  The Capitol Hill riot...
Read more
ELECTION 2020

So many professing Christians, sadly, do not understand the influence of the demonic realm in our natural world   By Rob Pue, Publisher - Wisconsin Christian...
Read more